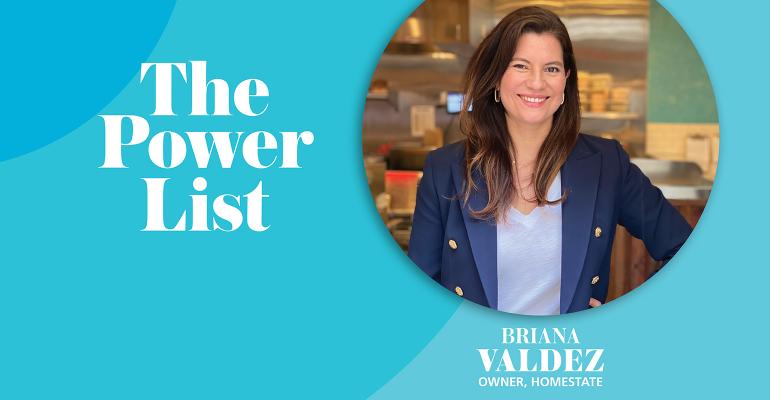 For Briana Valdez, there’s always an opportunity to do the right thing.

That became a driving philosophy last year as her three-unit taco concept HomeState worked to weather the pandemic and reimagine how it connected with its employees, customers and local Los Angeles communities.

“We dug so deep to get to that demand for us to try harder, to figure out a way," she said.

When shelter-in-place orders closed restaurant dining rooms, HomeState, like most restaurants, pivoted overnight to a fully delivery and carryout model. When employees expressed concern about the safety of taking public transportation to work, HomeState set up a ride share program in which employees with cars would be paid to pick up teammates. When local grocery stores were low on inventory early in the pandemic, HomeState “moved out the chairs and moved in the refrigerators,” to become HomeState General Store, offering pantry items and produce alongside its signature breakfast tacos and queso.

The menu was temporarily trimmed from 20 tacos to five, and modifications were no longer allowed. Even just allowing someone to add bacon to a taco meant a staff member would have to cross the small kitchen and come too close to a colleague, Valdez noted. She also decided in April to temporarily cancel all third-party delivery — which at the time made up 35% of sales — citing safety concerns. For five months delivery was handled using the brands staff and catering vehicles to serve a limited delivery radius.

“We risked upsetting a lot of people,” she said. “To tell guests no when we created a culture of yes — it felt so wrong. But we had to calm that urge to say yes and put health and safety first.”

When people took to the streets in June to protest the killing of George Floyd at the hands of police, HomeState was outspoken in its support of protesters and of the Black Lives Matter movement.

“It was hard to know what the role of a small taco restaurant should be,” Valdez said. “Eventually we stopped asking what it should and asked, ‘What do we want to say, as humans?’”

“We’re trying to do the right thing, and make progress, using the tools we have,” she added.

One such tool: the Band Taco.

Since 2015, HomeState has offered an off-menu taco developed with a rotating slate of musicians, from which proceeds go to local charities. The Chicano Batman — soyrizo, potatoes, guacamole and salsa verde on a corn tortilla — was developed with the LA band of the same name and introduced in July to benefit two charities: The Watts Empowerment fund, which supports children and families within Watts Housing Projects, and No Us Without You, which distributes food to undocumented hospitality workers. As of the end of 2020, it had raised more than $52,000. The taco was so popular it will remain on the menu indefinitely.

Next up for the brand: A fourth location in Pasadena is scheduled to open for delivery and takeout this spring.