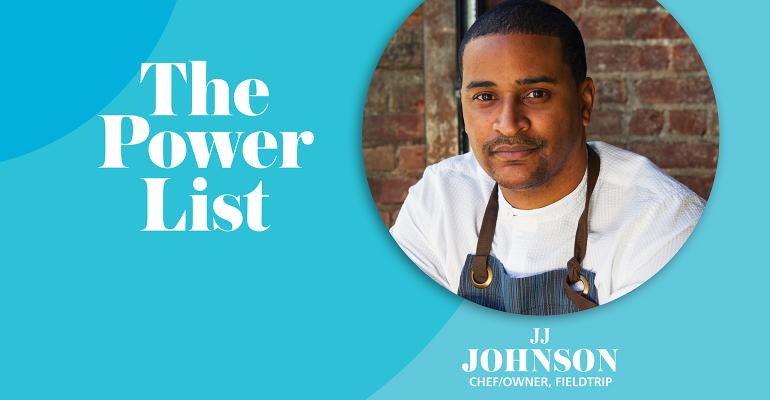 Chef and restaurateur JJ Johnson has long been an outspoken ambassador of Black culinary culture, but as the coronavirus pandemic swept the world and a reignited social justice movement swept the country, he has also become a voice for change in American restaurant culture.

A graduate of the Culinary Institute of America in Hyde Park, N.Y., and author of the award-winning cookbook “Between Harlem and Heaven: Afro-Asian-American Cooking for Big Nights, Weeknights, and Every Day,” Johnson first gained critical acclaim as chef of The Cecil Steakhouse in the New York City neighborhood of Harlem, where he introduced his customers to a cuisine that reflected his own Caribbean heritage as well as the connections between the foodways of West Africa, Asia and the Americas.

In 2019, he opened FieldTrip in Harlem, a fast-casual rice bowl restaurant that broke from that segment’s typical approach of infinite customizability and instead presented curated bowls with more complex flavors, such as one with sticky rice topped with shrimp in green curry sauce with toasted coconut, and another with salmon and piri piri sauce over Chinese black pineapple fried rice.

With the onset of the pandemic he started feeding local hospital workers with a “buy-a-bowl” program and soon expanded it to locals in need, teaming up with the New York City Housing Authority, an urban farming group called Harlem Grown and others, while also keeping locals employed.

As the social justice movement erupted in late spring, Johnson lent his voice to people calling for a more just and inclusive society.

In an interview with Esquire magazine, he called on restaurateurs to hire a work force, including executive chefs and management, that reflects society.

“The restaurant industry needs to look diverse, feel diverse, to look Black, feel Black,” he said. “My white peers need to hire diversely, to make sure people walking in and out of your stores are being treated fairly, and to rise up as one to solve the issue right now.”

In November, Johnson’s Ingrained Hospitality Concepts LLC opened a second FieldTrip in the Queens neighborhood of Long Island City, N.Y., and a third unit is slated to open in Rockefeller Center in Midtown Manhattan.