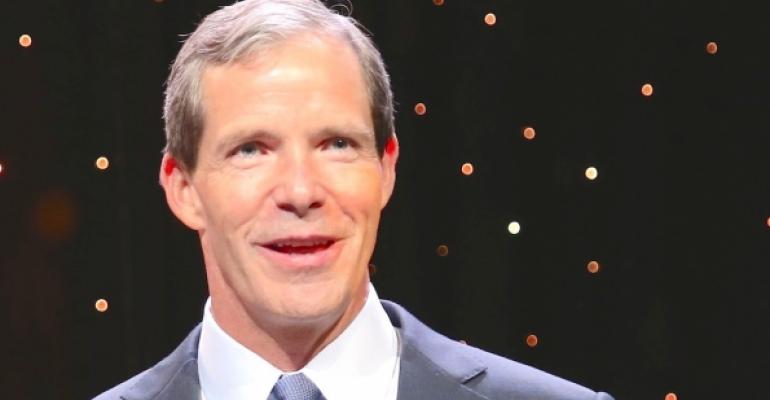 Greg Flynn, who used his real estate investment savvy to build the largest restaurant franchisee in the country over a 17-year career, on Monday was named Nation’s Restaurant News’ Operator of the Year.

Flynn, the founder, chairman and CEO of Flynn Restuarant Group LP, is the first franchisee to win the award in its history — fitting for a man out to disprove the notion that franchisees are second-class investments that can’t grow as fast as franchisors.

“I guess operations matter,” Flynn said as he received the award. “We live it, breathe it, eat it and drink it every day.”

“It recognizes that franchisees are getting a little credit for running restaurants day in and day out,” Flynn said during his speech, when he noted that both he and Sun Holdings CEO Guillermo Perales, a fellow franchisee, was also a Golden Chain award winner. “Simply running great restaurants day in and day out is more important than marketing, more important than menu. All of those things are important, but the one thing that stands out in the pack is just execute well.”

The California native has used a series of acquisitions and investment moves to build his empire while proving to be one of the most innovative restaurant franchisees in history.

Starting with the acquisition of eight Applebee’s Neighborhood Bar & Grill locations in Seattle in the late 1990s, Flynn Restaurant Group LP has grown to amass more than 850 restaurants in three brands, also including Taco Bell and Panera Bread. The company was the first U.S. franchisee to reach the $1 billion sales mark, and today is nearing $2 billion in annual sales.

To put it another way: If Flynn’s company were a brand, it would be roughly the size of The Cheesecake Factory and would be one of the 40 largest concepts in the country.

“We have a better growth story than many franchisors,” Flynn told NRN in 2014.

Flynn Restaurant Group has largely used acquisitions to fuel its growth, taking advantage of a business where companies are routinely put up for sale while franchise brands look to unload stores to franchisees.

Perhaps its biggest opportunity came at a time when few other restaurant operators were buying: The recession, when lenders weren’t loaning money, keeping many potential buyers out of the market.

Flynn, whose company was known only as Apple American Group at the time, was able to buy up swaths of Applebee’s locations, at relatively low prices, from a franchisor determined to cease operating company stores. As those opportunities dried up, the company turned its attention to other big franchisees, like the 99-unit AmRest, which the group purchased in 2011.

As the company ran out of Applebee’s to acquire, it turned its attention to other brands. In 2013 it acquired Southern Bells Inc., the 76-unit Taco Bell franchisee.

The company has a strategy to integrate the restaurants into its operation, often keeping the people working at the acquired locations with promises of a strong, healthy future.

“We keep everyone,” Flynn said last year after his company’s Panera acquisition. “We paint a picture of a better outcome and give them resources to accomplish those better outcomes. They’re almost never disappointed.”

The company has a “state-and-federal” model of operations, where states, Flynn said in his Golden Chain interview, are groups of restaurants run by market presidents empowered to customize based on that market’s needs. For as big as the company is, Flynn said, “we believe that locally owned operators can execute better, for the most part.”

The “federal” part of the equation is those parts of the business that benefit more from economies of scale. “So everything like IT and HR and purchasing and training and real estate, finance, admin, accounting — all of that is taken out of the restaurants and done with a first-class staff at a national level,” Flynn said.

All of these acquisitions require financing. That’s another area where Flynn Restaurant Group has been a pioneer. The company was an early adopter in the use of private-equity investment to finance growth, when Goldman Sachs invested in the company in 2001.

And then, in 2014, the company received a $300 million investment from the Ontario Teachers Pension Plan, a deal that helped it get out of the 5-year private equity buy-and-sell cycle.

After receiving the investment, Flynn said that the investment community had long viewed franchisees as “second-class citizens” that should be “traded at a discount.” Yet it was clear that, after nearly two decades, Flynn has proven that wrong.

And now, in what might be the best indication of Flynn’s success in changing that perception, investors have been pumping money into large-scale franchisees, all hoping to mimic his success.

“Everyone’s trying to be the next Flynn Restaurant Group,” Brian DeLeo, head of the consumer and retail group with Deutsche Bank Securities, said earlier this year.

The Monday night awards reception and awards presentation are sponsored by: Avocados from Mexico