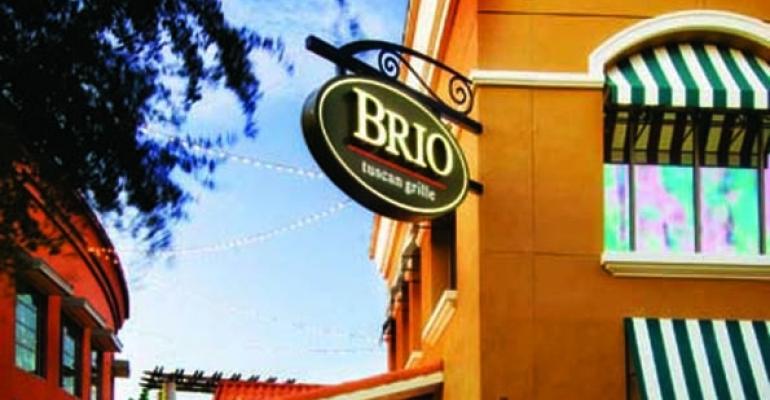 Mohseni remains bullish about Bravo Brio&rsquo;s prospects for making it through the casual-dining segment&rsquo;s transition period.

Bravo Brio Restaurant Group, the Columbus, Ohio-based operator of more than 100 Italian restaurants, has been managing through a major transition in the casual-dining segment the past few years, adjusting to shifts in consumer confidence and discretionary income, as well as changing tastes for more healthful items, chief executive Saed Mohseni said.

So how does the parent company to Bravo Cucina Italiana and Brio Tuscan Grille attain a little certainty in an uncertain time? By opening its first restaurant in California, a state that just voted to increase its minimum wage, and where intense competition and sticker shock over real estate prices make many brands wary of expansion.

To Mohseni, however, the move to open the first of several Brio restaurants in the Golden State makes perfect sense, as California’s demographics align well with Brio’s upscale-casual positioning and menu.

“It’s done very well, and we’re pleased with the start of the restaurant,” he said of the first Brio in Rancho Cucamonga. “We picked the right location. The brand is unique there, even though there are a lot of Italian restaurants, because we’re bringing the right balance of quality, ambience and price point.”

Through the Sept. 29-ended third quarter, Brio’s same-store sales decreased 4.1 percent, due mostly to negative traffic. But Mohseni remained bullish about Bravo Brio’s prospects for making it through the segment’s transition period based on recent sales-driving initiatives like gluten-friendly and Lighter Side of Tuscany menus for health-conscious diners, a focus on growing the carryout business, and service improvements.

“Change is something we can always count on,” he said. “Part of our job is not only to embrace that, but also to evolve to meet it.”

Were you wary of bringing the restaurant brands to a high-cost state like California?

In my past life, I lived in California for 18 years and operated a number of restaurants here, so I totally understand the barriers of operating here. Every market has its challenges. We’re in 30 states throughout the country, in higher minimum-wage markets and in less populous markets, or some places where weather is a factor week to week. From our perspective, we think California is the right market. Florida has been one of our strongest markets for Brio, and we think California will be right as well.

The costs of operating are harder, and there’s more competition, but we feel the benefits of California are the population, the high household income, and people’s habits of going out and dining. It allows us to be in the market to have the density to build more than two or three restaurants, but we will look at one site at a time. California could support many Brios.

Is California just a Brio market?

We would certainly enter the market with Brio, which offers the uniqueness of décor, value and quality that we don’t see any direct competition for in California. Then over time, we’ll look at Bravo as well. We entered Florida with Brio, and now we’re going back and adding some Bravo locations to it, but it’s a site-by-site decision.

Pushing for a sales turnaround

With all the sales-driving initiatives you’ve introduced the past 12 months, why are you confident sales will turn around?

The business has its ups and downs, and as a whole, not just our business but also casual dining and the polished-casual segment are going through some transition. When that happens, some brands focus exclusively on value and substantial discounts, and usually those are short-lived. We tend not to go that direction, but it does impact the business slightly.

We implemented a Lighter Side of Tuscany menu, which we think is the future of casual dining, because people are looking for more healthful options, and ours are at a slightly lower price point than the regular menu. Spice costs less than cream. It’s been very successful, and 20 percent of our entrée counts at Brio’s dinner come from there, which impacts our average check slightly.

While 2013 hasn’t tracked the way we wanted, the future is bright for Brio and Bravo and the segment. As employment gets better, people’s confidence will get better, and we think all those things lend to more frequency.

Many casual-dining brands are focusing on the lunch daypart to turn sales around. Is that a focus for Bravo Brio as well?

For us, lunch has always been a profitable part of our business, and it accounts for 40 percent of our guest counts and 30 percent of our revenue. It’s always been a part of our philosophy, so there have always been lunch specials for a value perspective. Our Lunch Pronto program lets consumers get a meal and leave in 45 minutes, so it’s all about speed. Our menu has always had entrée salads, which are very appealing to a female crowd and that lunch crowd, plus we’re located in shopping areas, which helps with lunch traffic. It’s a segment people are trying to grow, and for us it’s the portion we have a good hold on, so we need to work to maintain it and grow it.

The Italian scene is seeing most of its growth in the new fast-casual segment. Are these upstart brands going to cause challenges for Bravo and Brio?

Fast casual is the segment of the business that’s here to stay. Even within that category, for every Chipotle there is a Baja Fresh, and for every Panera Bread there is a Così. A lot of the Italian segment has been around the pizza side rather than full-service Italian. But, as to how many brands end up like Chipotle, that chapter hasn’t been written yet.

Therefore, we need to elevate our quality of food, because we believe there is still a guest base looking for that table service. For people going out today, it’s more than getting something to eat. A lot of baby boomers still aren’t used to standing in line for something to eat, and they’re more comfortable in table service settings, and we think we can enhance that for them.

Consumers are asking for new things like organic and local products, so we think this is a winning formula for Bravo and Brio. We’re one of the few companies to operate with executive chefs to allow for flexibility in menu development, rather than get everything from a commissary.