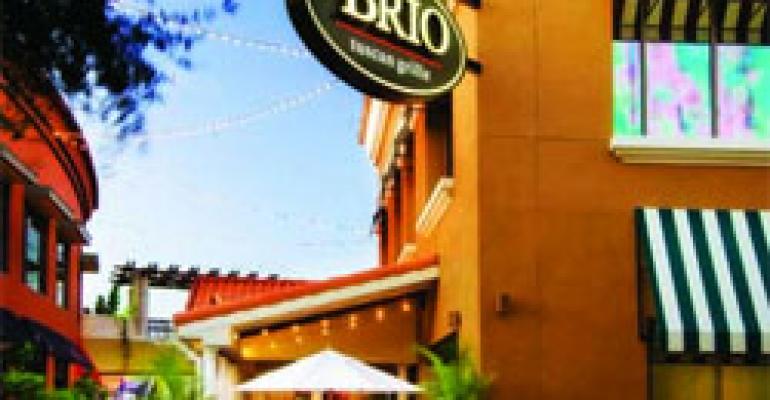 Bravo Brio to focus on front of house

After reporting modest gains in the first quarter, the company will implement several customer-centric initiatives to drive traffic

Bravo Brio Restaurant Group indicated that it would deploy several initiatives to drive guest counts in its upscale-casual restaurants while continuing to aggressively manage costs following modest gains in sales and traffic in the first quarter.

Revenue increased 8.8 percent to $98.4 million, reflecting 92 additional operating weeks from eight restaurants opened in 2011 and three in the first quarter, as well as a total increase in first-quarter same-store sales of 0.2 percent. Officials said the result was split equally between a 0.1-percent uptick in traffic and a 0.1-percent increase in average check.

“Our continued focus is on guest-centric, front-of-the-house programs that are geared to enhance the Bravo Brio experience, whether guests are looking to dine in our restaurants or use our catering and to-go program,” said chief operating officer Brian O’Malley.

Such programs include recently launched gluten-free menu items, healthful items sold at slightly lower price points, and a new 45-minute guarantee at lunch, which accounts for 30 percent of the company’s total sales mix.

“This commitment is geared toward particularly capturing the business diner segment, for whom time considerations are important,” O’Malley said. “In truth, we are not changing any operational procedures, but rather reinforcing the idea that a full-service lunchtime experience can be had in 45 minutes.”

Both concepts debuted revamped menus in April, with slight price increases that would account for a total menu price hike between 1 percent and 2 percent for the year. Other initiatives would extend one brand’s strengths to the other in order to boost traffic, said chief executive Saed Mohseni.

The company also will extend its successful catering program to Bravo Cucina Italiana after positive results achieved at Brio Tuscan Grille. At the same time, Bravo’s online ordering program will be implemented at Brio as well.

Stephen Anderson, securities analyst with Miller Tabak & Co., wrote in a research note that the initiatives management specified ought to push same-store sales higher through the remainder of 2012.

“We expect traffic gains to accelerate in the second quarter with the introduction of a 45-minute lunch guarantee at Bravo and Brio,” he wrote, “though we caution headline comp growth may rise at a slower rate than we had expected due to a lower average ticket at lunch.”

Bravo Brio reaffirmed an earlier outlook projecting an annual same-store sales increase between 1 percent and 2 percent for 2012, as well as the opening of nine restaurants, mostly Brio locations, during the year.

The Columbus, Ohio-based company operates 47 Bravo locations, 48 Brio units and one location of its Bon Vie concept in 30 states.