/sites/all/themes/penton_subtheme_nrn/images/logos/footer.png
Recent
Recent
The third-largest pizza chain is ready for a war
Dec 02, 2022
DoorDash’s layoffs are not a time to panic: they’re a time to rethink the delivery industry
Dec 01, 2022
How Checkers & Rally's plans to adjust as other brands adopt its double drive-thru model
Dec 01, 2022
How a local grain became the star ingredient of the stand-out pita at Gavin Kaysen’s latest restaurant
Dec 01, 2022
Subway is serving footlong cookie ‘subs’ for only one day
Nov 30, 2022
Featured
How 21 restaurant companies performed in their most recent quarters
Nov 22, 2022
How eco-friendly Seattle restaurant chain Just Poke is doubling in size in 2022
Nov 17, 2022
In the Mix this week: White Castle’s culture, a CREATE recap, Denver’s restaurant scene and more
Oct 27, 2022
How this emerging brand is planning on nearly quadrupling in size in just one year
Oct 21, 2022
Operations 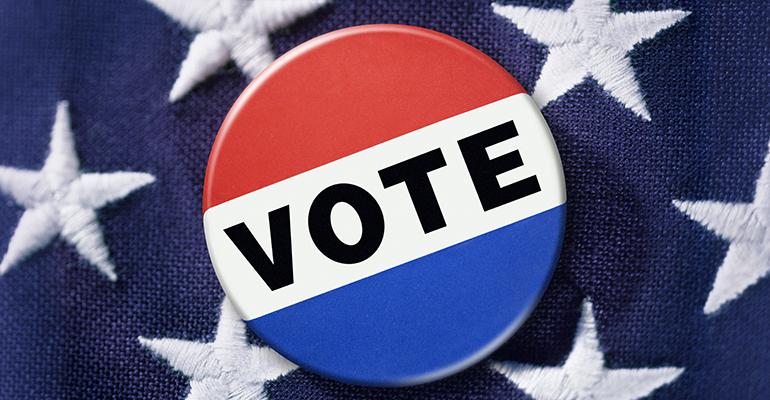 Start Slideshow ›
From online portals to paid time off, here’s how brands across the country are preparing for Nov. 3

The 2020 presidential election has seemingly seeped into the daily lives of Americans more than any election before. It’s impossible to turn open Twitter or a new internet tab without seeing news or opinions about the impending election. And there are just as many stories about registering new people to vote and restaurants have joined the fray.

Voter turnout since the year 2000 hasn’t been above 62% of the voting-age population – the highest percentage in 2008 when Obama was elected, according to nonpartisan voting reform advocacy group FairVote. In 2020, cities have seen lockdowns, the beginning of a recession, businesses close, racial injustice, financial uncertainty, protests and a deadly disease rampage the country, which is the reason many are trying to turn out more voters than ever before without citing one political party or the other.

Restaurant chains are not immune. In fact, many of them have led the charge.

Over the summer, during height of the protests against the police killing of George Floyd and other Black Americans, &pizza announced it would be making Election Day a holiday at all its locations, closing the restaurants and giving employees the day off to vote.

In June, CEO Michael Lastoria made this statement with the announcement: “Our democracy has been pushed to its limits, and we want to empower and educate our workforce to assert their voice at the polls. With the industry's help, we can provide a much larger opportunity to do what's right, and what's needed in this country for this election and moving forward.”

The company went on to explain, “the restaurant industry employs 10% of the American workforce, and that 10% should not have to choose between receiving a paycheck and casting a ballot.”

But that’s not all.

With the rise in absentee ballots this year while the country remains in the recovery phase of the pandemic and indoor gatherings are restricted in most states, restaurants have taken to encouraging consumers to register and vote, and providing information for customers and employees to vote via absentee ballot.

Social-media app Snapchat says it registered 1 million voters via its app, more than half of whom were first-time voters.

Chipotle created a shirt that enabled on-the-go voter registration that it sold on its website for $11.03 (the date of the election), and it instantly sold out. The company says it has registered over 1,000 voters through this initiative.

Nando’s, &pizza and MOD Pizza have encouraged voter registration and created places for voters to register inside their businesses, in some instances even giving customers the paperwork to register or request an absentee ballot on the menu.

“At Nando’s, we’ve put voting on the menu because we originated in South Africa. We were there in 1994 when millions of South Africans had their voices heard for the first time. Voting is a right and should never be taken for granted,” said Sepanta Bagherpour, Nando’s chief brand officer. “This is not the election to sit one out.”

The company is also offering workers free rides to the polls.

Other companies have introduced new policies giving employees paid time off to vote not just in this election but any election in the future, whether it’s local or national.

Larger restaurant companies like Yum Brands have created online portals encouraging customers to vote and register, making the sometimes-confusing processes of getting an absentee ballot and registering easier than before.

Early statistics show that more people are set to vote this year than ever before, and the number of eligible voters registered is going up. With some states starting early in-person voting and others collecting absentee ballots, places like counties in Texas have already seen higher turnout three weeks before Election Day than the entire 2016 election.

Time to Vote, a “nonpartisan effort for companies that want to contribute to the culture shift needed to increase voter participation in our country’s elections,” has a list of hundreds of members on its site. Barcelona Wine Bar, Ben & Jerry’s, Chook, Chopt, Dos Toros Taqueria, Earls Kitchen & Bar, JuiceLand, Lemonade Restaurant Group, Salt & Straw, Shake Shack, Sweetgreen, The Fifty/50 Restaurant Group and more than 700 others have signed on to the pledge.