Starbucks announced it would give its employees schedule flexibility to vote. The Seattle-based chain created a program, Fuel Our Democracy, aimed at helping employees register to vote and volunteer at polling places, and inform customers during election season.

Broomfield, Colo.-based Noodles & Company is giving workers one hour of paid time off across its 400+ locations to vote for the election season, either in-person or vote-by-mail.

The Washington, D.C.-based fast-casual pizza chain &pizza will close all 40 locations on Election Day to allow workers to vote. &pizza is also advocating for other restaurant chains to make it a holiday and give workers the day off with pay.

&pizza, Wetzel’s Pretzels, Voodoo Doughnuts, Sticky’s Finger Joint and others have partnered with Pizza to the Polls, an organization that sends food trucks to polling locations across the country, delivering free food to people in line at the polls. Locations haven’t been announced but the NY Daily News reported that this year’s food will include individually wrapped Shake Shack and Milk Bar items between Oct. 24 (when early voting begins in New York) and Nov. 3.

Yum Brands partnered with Rock the Vote, a nonpartisan organization “dedicated to building the political power of young people.” The online portal from the Louisville, Ky.-based restaurant group gives employees a place to register to vote, find their polling place, order an absentee ballot and more.

In September, Johannesburg, South Africa-based chicken chain Nando’s set aside room in units across Washington D.C., Maryland, Virginia and Illinois as voter registration centers where customers could learn about local elections and register to vote.

Through election day, customers can order “Voter Registration Form: Free” with their online or in-person orders. It is a menu option at all 43 U.S. units.

Nando’s is also offering employees paid time off to vote, “dedicated time and resources to educate Nandocas on how to register, vote early and safely vote at home or in-person” and free transportation to polls for its employees.

Bellevue, Wash.-based MOD Pizza launched “MOD the Vote” to encourage team members to use their voices in the upcoming election. The initiative includes paid time off to vote, a voter resource page on the company’s website, a “MOD the Vote” stamp on pizza boxes directing customers to the resource page at all 480 locations, and sharing first-person stories on social platforms.

The first story shared was from Will, a member of the MOD Squad who was formerly incarcerated: “I was released from prison in October 2011, and on November 6, 2012, I was able to cast my vote. I know that my vote matters not only in the Presidential race, but in all local and state races, and that I can make a difference in my community and in the lives of those around me.”

Los Angeles-based Sweetgreen, which has 100 locations, created a voter resource hub encouraging customers to vote and providing all the relevant information to register.

The politically active ice cream chain Ben & Jerrys, which has restaurant locations, declared Election Day a holiday and day off for all workers, including those at the ice cream factories in South Burlington, Vt., where the company is headquartered.

In response to Black Lives Matter protests in and around New York City, NYC-based Milk Bar decided to close, limit hours and/or provide paid time off to allow employees to vote and advocate for local elections, as announced in an Instagram post.

Chi-VOTE-le, as the chain changed its Twitter moniker to ahead of the election, made shirts to promote the same message. Sold for $11.03, the short-sleeve T-shirt was emblazoned with the “Chi-VOTE-le” logo on the front, while a pepper-shaped QR code sits on the left shoulder. The QR code was programmed to be scanned and register voters.

The shirt sold out quickly and Newport Beach, Calif.-based Chipotle registered over 1,000 voters through the initiative.

Wings Over, the 40-unit chicken brand based in New York City, announced paid time off for all workers on Election Day annually, even in local election years.

The NYC-based fast-casual salad chain is placing QR codes on every salad that, once scanned, directs customers to their nearest polling station. 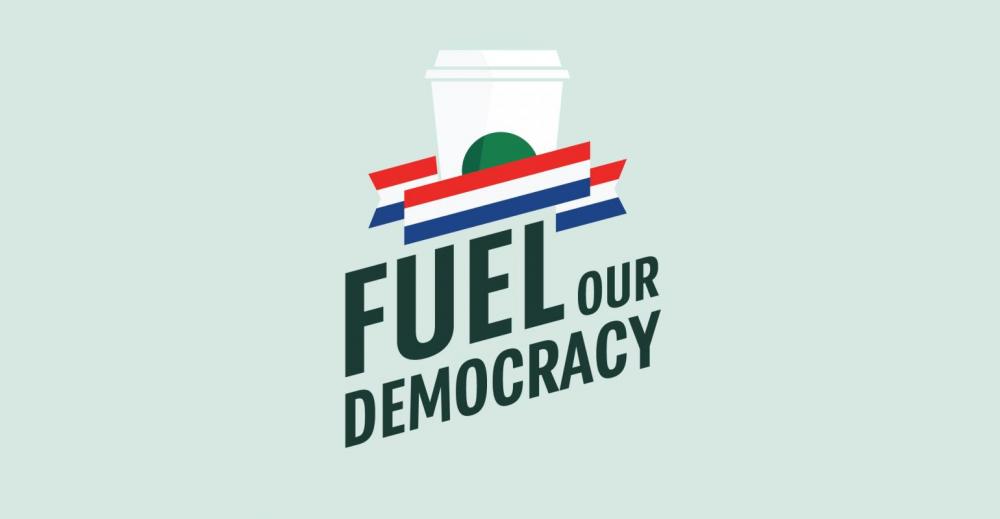