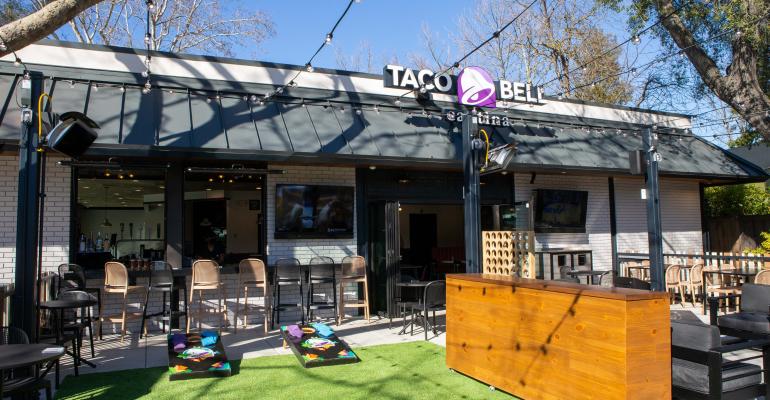 Taco Bell says it will ‘prioritize digital elements’ as the store portfolio continues to expand, including kiosk-only stores and “bellhop” concierge to speed up drive-thru times

Taco Bell announced Tuesday the Irvine, Calif.-based chain’s development plans for the year and decade ahead, which “prioritize digital elements” for on-the-go customers, including a national rollout of the previously announced Go Mobile store prototype, and the grand opening of the first-ever drive-thru Cantina earlier this year.

Related: Taco Bell brings back its Quesalupa just in time to compete with the new quesadilla at Chipotle Mexican Grill

The new Cantina drive-thru, meanwhile, which is now open in Danville, Calif. features a more social experience-driven layout of the urban-style Taco Bell spinoff, with an outdoor firepit and game area and a full bar for dine-in guests (which is not yet open due to COVID-19 restrictions). The store is owned and operated by franchisee Diversified Restaurant Group, which also owns the flagship Taco Bell Cantina in Las Vegas

“Prioritizing our development plans continues to be a major focus for 2021, especially as we look towards building our next 1,000 restaurants,” Mike Grams, Taco Bell president and global COO said in a statement. “Our restaurant portfolio continues to rapidly evolve, striking a crucial balance between being technology-forward and social-oriented. Even amid the challenging pandemic, we are continuing to grow due in large part to the strength in our franchise partnerships as well as the flexible formats we offer."

Another upcoming store prototype will be a kiosk-only store opening soon in Manhattan for a digital in-person experience, perfect for urban stores that won’t necessarily have drive-thrus.

The Go Mobile store prototype, first announced in August 2020, continues to evolve in its digital offerings, and will be rolled out both to new stores and retrofitted into old stores. The new Go Mobile concierge team of “bellhops” is meant to improve drive-thru efficiency by navigating tablet ordering and curbside pickups.

“As great as the drive-thru is, a fundamental flaw is bottleneck at the windows,” Lee Engler, CEO of Border Foods and Taco Bell franchisee said in a statement.

“Our team has set out to creatively solve for that like no one else has done before, and we’re thrilled by positive early responses to our one-of-a-kind concept coming to Brooklyn Park, Minnesota.”