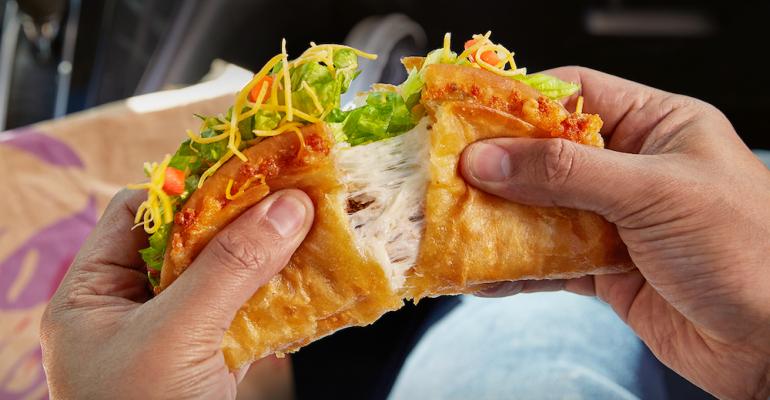 Rewards program members can get the new item a day early

Taco Bell is bringing back its Quesalupa on March 11, the same day that Chipotle Mexican Grill is debuting its quesadilla, the Yum! Brands subsidiary said Tuesday, and it's giving its rewards program members a chance to buy the returning item a day early.

In a release announcing the return of the item, which debuted nationally in 2016 after being tested in Toledo, Ohio, in 2015, the quick-service subsidiary of Yum! Brands said the new version of the Quesalupa has 50% more cheese than the original. That includes a melted blend of pepper Jack and mozzarella coating the inside of the crispy Chalupa shell, as well as the cheddar that’s stuffed inside along with seasoned beef, lettuce, diced tomatoes and reduced-fat sour cream. It’s $2.99 at participating locations, which puts it in a different competitive set than Chipotle’s new item. The fast-casual chain’s quesadilla is priced at a 55-cent surcharge to its burritos and bowls, which start north of $7 in most markets.

For around $6.99, Taco Bell customers can get a combo that includes two Crunchy Tacos and a large fountain drink as well as a Quesalupa.

Both items launch on March 11, but members of Taco Bell’s rewards program can get the Quesalupa on March 10.

The new, cheesier, Quesalupa was tested last September in Knoxville, Tenn., and is being marketed with an integrated campaign titled “Overhyped.”

“Because sometimes there’s just a little too much overhype in the world, the brand is skipping the theatrics, pyrotechnics and elitist attitudes, and instead, simply letting fans know the Quesalupa is back with one message: ‘We think you’ll like it,’” Taco Bell said in a announcing the return of the menu item.

The campaign was developed with creative agency Deutsch LA and includes a 30-second and two 15-second digital ads as well as social-media elements on the TikTok app.

This is not the only cheesy Chalupa that Taco Bell has reintroduced in the past year. The Toasted Cheddar Chalupa, which was introduced in 2019, was brought back last October.