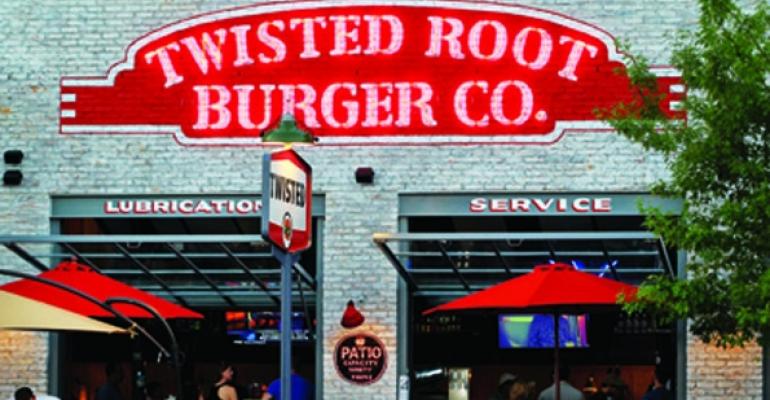 Twisted Root Burger Co., the Dallas-based better-burger concept, plans to double its unit count over the next year and a half, emphasizing suburban locations.

Seven-unit Twisted Root plans to add five restaurants this year and at least two in 2014, including its first nontraditional location at Dallas-Fort Worth International Airport and its first franchised unit in Shreveport, La.

Founder Jason Boso opened a unit in the Dallas suburb of Bedford, Texas, in March. He said he sees solid potential for the concept, which started as an urban burger spot, in suburban markets.

Twisted Root — which was a 2011 Nation’s Restaurant News Hot Concept honoree and has been featured on the Food Network program “Diners, Drive-Ins and Dives” — plans to take its chef-driven menu, unique décor and housemade condiments to suburban Carrollton, Texas, as well as Fort Worth and Austin, later this year.

The better-burger segment is getting crowded and competitive. What do you see for its future?

What I’m learning is that the concentration is happening in high-density areas like downtown. When I go to [Dallas suburbs like] Bedford, Coppell and Roanoke, there’s plenty of room for the better-burger market out there. I’m shifting toward those type of locations.

What advantages do you see in suburban locations?

The interesting thing is that those cities are really hungry for businesses like ours. In Carrollton, Bedford and Roanoke, I’ve struck deals with the cities for tax incentives to bring the funky-cool concepts to the towns. All they have to service them now is the high-end chains from other states that are generic.

We’re very character-driven. We’re not trying to compete solely on a hamburger. We’ve got some interesting offerings and a full bar. That helps me beat out Five Guys or Mooyah. We have the full bar in most of the locations, or a limited bar.

Are you changing square footage or seating?

Because rents are getting more expensive, I’m trying to stay at about 3,000 to 3,100 square feet. I can get 80 to 90 seats when I’m efficient in that space. That greatly reduces my rent at the end of the month but still [allows me to] do my revenues to pay my investors back and still have some beer money for me.

How have beef price increases affected the restaurant?

Last year was way up. My meat prices went up from $2.05 to $2.45 a pound in the last year and half. But they've been pretty stable the last couple of months.

Are there any changes in the concept to accommodate franchising?

The smaller franchisee is attracted because we are fun. It’s a sexy sell. It has a bar and some attitude and personality. We’re also a little more niche than the other burger guys going into shopping malls with a clean aesthetic.

What is the average check at Twisted Root?

We’re at $11.71 for a per person average, which includes alcohol.

What advantage does the changing, chef-driven menu give you?

It gives people a reason to come back. We might be offering an alligator burger next month. We try to offer something different, either on the milkshake side or burger. The personality of the place also evokes a little of the ‘This is my joint’ feeling for the guests.

Are you doing anything in menu development?

I’m really testing sous vide for the burgers. My initial tests are going well. The biggest problem is cooking it to the right temperature. We’re doing eight ounces of meat. With sous vide I can get it to the exact temperature I want and get a great product every time. It cuts out some of the potential errors from the grill cook.