Smokey Bones hasn’t had a straightforward history. Founded in 1999 by Darden Restaurants Inc. as Smokey Bones Barbeque, the casual-dining chain was tweaked multiple times as its parent company tried to determine how to give national appeal to a food as regionally idiosyncratic as barbecue.

In 2007, Darden sold the concept to a subsidiary of Sun Capital Partners, which renamed it Smokey Bones Bar & Fire Grill.

Chef Mark Bibby was consulting with Darden on Smokey Bones at the time of the sale, and Sun Capital hired him to be the vice president of culinary for the struggling brand.

Since then, the chain has been reconceptualized, away from barbecue and toward a more general casual-dining format. But in the latest image adjustment under chief executive Christopher J. Artinian, who took the chain’s helm in June, one key component in barbecue — smoke — has been brought to the forefront of the restaurant’s image. New menu items include a smoked prime rib, which is offered as a special Thursday through Sunday from 4 p.m. until closing.

Tell me about the smoked prime rib.

It’s going really well, a lot better than I anticipated. Every week [it] has been increasing in sales, which has been great. It seems to be getting a good guest response.

We already have two smokers in each restaurant, and to be able to use them for another item is great. 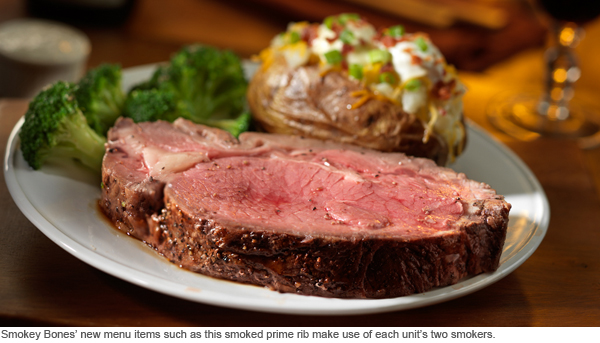 How do you make it?

We take a 10-pound rib eye, season it with kosher salt and pepper, and put in the smoker at 200-225 degrees [Fahrenheit] with preheated hickory wood. We cook it for about an hour and 45 minutes to an internal temperature of 115 degrees, and then hold it [in a warming oven] until it reaches 120-125 degrees. We heat it to order and offer either a 10-ounce or a 14-ounce portion, with au jus and horseradish sour cream. We make sure it’s ready by 4 p.m., and an hour later we’ll throw another piece in for people who want their meat rare.

What other items have you added?

We’ve already got a really good base of barbecue, which Smokey Bones will always have, but our way forward is signature fire-grilled items.

One is a 14-ounce rib eye marinated in soy sauce, pineapple, brown sugar and ginger. The marinade loosens up the meat a little, and it grills really well because of the sugar and pineapple on it. We top it with a pineapple teriyaki just to give it a nice glaze as it goes out.

A year ago we added a build-your-own burger, with 30 toppings and a choice of Angus beef, turkey burger, grilled chicken and veggie burger.

For the holidays we have cinnamon apples, which are Jonathan apples tossed in brown sugar, cinnamon and butter with caramelized pecans. We bake it, top it with a pecan crumble [butter, flour, oats, cinnamon, brown sugar and caramelized pecan]] and bake it again. It’s selling very well, and those Jonathan apples have such a great flavor and texture when they’re cooked through, so we’re very happy with that. I even tried smoking one, which was an interesting flavor as well.

But that didn’t make it onto the menu?

No. That was just a chef having some fun. But we’re looking at using the smokers more in the months to come.

We’re looking to do a [limited-time offer] in May or June next year that might include adding smoked meat to the burgers. We might have a piece of [smoked] brisket that could be ground into the burger for a natural smoky flavor. We’ll also be running an LTO with bratwurst, knackwurst and hot dogs that we’ll smoke. And we’re playing around with smoked salmon to go on salad or pasta or a sandwich.

We’re also working on putting some vegetables in the smoker as a lighter item.

In June we’ll be focusing on a shrimp entrée — we currently just have it as an appetizer. I’ve considered smoking those as well.

What are Smokey Bones’ most popular menu items?

Baby back ribs are still the No. 1 selling item. Pulled pork does well, too. We’ll just try and increase quality [for those dishes] where we possibly can, but the drive is to have a background of barbecue with a fire-grilled menu.

Smoked chicken wings have been on the menu for a couple of years, but they’ve absolutely gone crazy over the past 18 months, and now they’re a top seller.

I understand you’re also doing some brewery dinners. Can you tell me about them?

They’re like wine dinners: multiple courses, each one paired with a different beer. Our first one was at our Tyngsboro, Mass., location, where we teamed up with Leinenkugel’s brewery. The next one will probably be with Samuel Adams. We’re planning to set them up throughout the coming year to try to promote our beverage program.

How did the first one go?

How much did you charge?