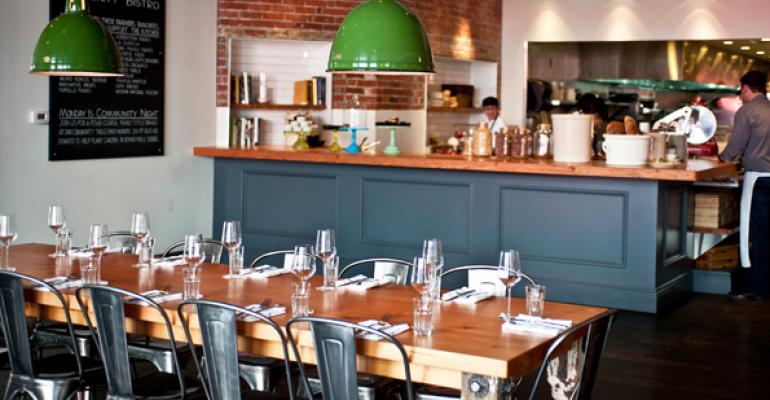 <p>The Kitchen now has a restaurant in Denver.</p>
News>Casual Dining

Entrepreneur Kimbal Musk discusses what&rsquo;s behind his nonprofit and his restaurants.

He built and sold several tech companies. First he and his brother Elon Musk created Zip2, which was reportedly sold to Compaq for more than $300 million in 1999. A few years later, Elon sold his company PayPal, in which Kimbal was a significant investor, to eBay for $1.5 billion in stock.

Then Kimbal went to cooking school, though he keeps a hand in the tech world. Brother Elon went on to launch electric car company Tesla Motors and space-exploration firm SpaceX. Kimbal sits on their boards, as well as that of Chipotle Mexican Grill.

In 2004, Kimbal opened his first restaurant with chef Hugo Matheson called The Kitchen in Boulder, Colo., a farm-to-table community bistro with a focus on local vendors.

Soon, a wine lounge with a wood oven became an extension of the restaurant called the Kitchen Upstairs. Later, they added the Kitchen Next Door, a more casual and affordable variation.

Now, as the concepts grow in various formats into new markets, Kimbal is seeding that new growth — quite literally — with a nonprofit that builds Learning Gardens in schools.

The Kitchen Community is an organization that builds outdoor “classroom” gardens where children can plant, grow, harvest and play as they learn about basic principles of natural science. So far, gardens have been built in 168 schools in Denver, Chicago and Los Angeles. On Friday, a new initiative to build 100 gardens in L.A. schools will be launched with matching funds from the city’s school district.

Kimbal is scheduled to be in Los Angeles Friday for the annual Restaurant High conference hosted by law firm Davis Wright Tremaine. The event is expected to draw more than 400 restaurateurs from across the U.S. for a day of education and networking, and all proceeds from the conference will benefit The Kitchen Community.

Kimbal spoke with Nation’s Restaurant News this week about his restaurants and how the Learning Gardens concept will help further the notion of building a better community.

How did the Learning Gardens project start?

We wanted to change the way people think about school gardens. We put them right in the middle of the schoolyard, where kids can play in them and where teachers would want to teach in them.

Our goal was community through food. But it’s also helping to improve test scores for the students, especially around science. By the time these kids reach sixth grade, they are doubling their intake of fruits and vegetables, and they’re improving their test scores. … And it’s a way to get them as restaurant customers as they get older.

You’ve had quite a bit of success in the tech world. What brought you to the restaurant industry?

My passion is technology and food. It always has been. We had achieved a pretty significant goal (with the sale of Zip2), so I decided to attend the French Culinary Institute. It was a very intense, old-school type of education. They untrain you with everything you know and then they start over and train you from scratch. It was an incredible experience.

Just after I graduated, it was 9/11. I had this incredible opportunity to volunteer to cook for firefighters working the scene. There were giant piles of smoldering metal all around me. I went every day for six weeks and I just couldn’t get enough of it. The idea of a restaurant became somewhat of an obsession for me. I realized there’s no better way to create a community.

How did you end up in Boulder?

My wife at the time was a light and art designer and we moved to Boulder. Literally within a few days of being there, my dog got off the leash and goes up to this guy, and that’s how we met Hugo, who had been a chef at the River Café in London. He had an English accent, and I’m from South Africa. He invited us to dinner. It was a super serendipitous experience. About 18 months later, we opened The Kitchen.

The evolution of the Kitchen

How did the other concepts evolve?

We had added the Kitchen Upstairs, which was a wine lounge with a wood oven. It was a more fun and social place, and was really an extension of The Kitchen.

Then about four years ago, I had an accident while skiing. I was on an inner tube that flipped, and I was paralyzed on one side for a few months. At the time, I felt The Kitchen and Upstairs didn’t reach enough people. It didn’t have the feel I wanted. And I realized life is short and I wanted to do something about it.

So we opened Kitchen Next Door, which was lower priced, much faster and more fun. It’s more of a pub environment. We created a kids’ menu that taught kids you can eat healthier food that would taste just as good. Instead of fries, for example, we do kale chips. It’s super tasty for kids but has more nutrients.

How are you handling supply challenges as you grow?

The nature of our business is very supply chain based. Since local farmers are our suppliers, it’s extremely valuable to have more than one restaurant in one location. First we want to create a community hub and grow from there.

How will the Learning Gardens help?

We think the nonprofit will help drive our growth. They’re really two different companies, but because we spent so much time in Chicago, where the mayor has given $1 million for gardens there, I’ve lived there for the past year working on the nonprofit. You get to know landlords, and some have the same vision. It becomes inevitable that we’d open a restaurant there.

Now I’m spending time in Los Angeles, so it’s inevitable that we’ll do a restaurant there too.

Will you take The Kitchen to other markets?

We’ll probably focus on adding restaurants in those three communities, rather than growing more outside. We’re doing our best to grow at the pace our supply chain will maintain. If we grow too fast, we’ll be forced to use traditional suppliers, and I think we will not succeed.

I’m on the board at Chipotle and have been watching things they’re doing to impact the supply chain. They are big buyers and can work with these farmers at scale to improve the way things are raised, to improve transparency and how things are done and to become more responsible citizens, not only from the perspective of the animal, but for the quality of the product.

The term farm-to-table is used increasingly now in the restaurant world. How do you feel about what that has come to mean?

The term was invented after we started, but we love it. There’s a much greater awareness from customers about what local means, from the quality and uniqueness of the product – a carrot grown in L.A. isn’t the same as a carrot grown in Denver – to the environmental realities. If you know who your suppliers are, you know what they’re doing to the environment. Everyone becomes a much better patron of the community.

If (restaurants) keep doing what they have been doing, looking at price regardless of quality or nutrients or the impact on the community, Millennials are going to leave us behind. It’s becoming very, very important to the younger generation.