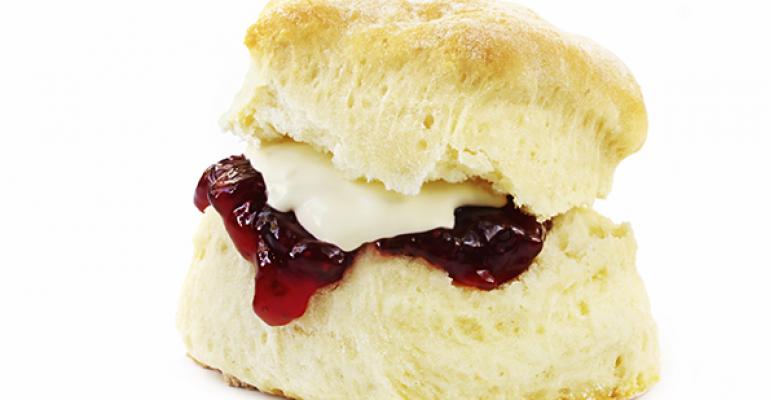 Inside the latest iteration of a long-running trend

The raging popularity of jams and jellies in savory applications won’t come as a surprise to trend watchers. Jam was named by Datassential as the second fastest-growing sandwich condiment last year, muscled out of the top spot only by super-hot Sriracha. The reality, however, is that chain chefs have long favored jams and jellies as condiments and sauces, as witness the jalapeño jelly at Chevys, the onion marmalade at La Madeleine and the red currant jelly at Rock Bottom Brewery, all of which appeared on menus in the 1990s. This current craze represents the latest iteration of a long-running trend at both chains and independent operations.

Creative condiments. Biscuits and jelly are natural companions, and as chefs have reinvented biscuits as sandwich carriers, they’ve also reconsidered the jelly component. Bang Bang Pie & Biscuits in Chicago is celebrated for biscuits made with sour cream that provide the foundation for sandwich specials like its Ham Biscuit with poached egg, pimiento cheese and pepper jelly. Blacksauce Kitchen in Baltimore boldly declares that “ridiculous biscuit sandwiches are our signature,” and makes good on that promise with toothsome sandwich fillings like beef brisket with tomato jam and fried chicken with smoked peach jam.

Savory jellies and jams have received a major boost from the boom in better burgers and upscale sandwiches. Hopdoddy Burger Bar in Austin, Texas, for example, topped the Triple B Burger Special with arugula, onion strings and bourbon-bacon-onion jam. At 8 Oz. Burger & Co. in Seattle, the burgers benefit from garlic-tomato or piquant habanero jam, while Five Star Burgers, headquartered in Albuquerque, N.M., finishes the Brunch Burger with Hollandaise sauce and tomato jam. Fig jam has made a major splash on menus of late. In California, Eureka! Restaurants, which promote authentic, handmade cuisine with locally sourced produce, created the Fresno Fig Burger with homemade fig marmalade, melted goat cheese, crispy bacon and a dollop of spicy porter mustard. Across the country at A&B Burgers in Salem, Mass., the Broken-Hearted Winkler Burger was offered on Valentine’s Day and included fig jam, burrata and bacon. And at Einstein Bros. Bagels, the Napa Valley Chicken Sandwich boasts melted Brie, red onion, garlic aïoli and fig jam.

Over the top. Jams and jellies provide the finishing touch to lots of other items, too. Brio Tuscan Grille’s Chicken Calabrese Flatbread with smoked chicken, sun-dried tomatoes, Boursin and mozzarella cheeses and onion marmalade appears on the regular menu, while Prosciutto and Onion Jam Bruschetta is available for a limited time only. Caribou Coffee features oven-toasted Turkey and Brie Baguette with pepper jelly, but Mopho in New Orleans uses pepper jelly to braise Cedar Key Clams. The PB&J Grilled Cheese Sandwich at South City Kitchen in Chicago plays on patron expectations by using pear, Brie and blueberry jam to enhance the childhood favorite. Occidental Grill in Washington, D.C., also upended expectations with the Lamb Dagwood Sandwich. Although mint jelly is the classic accompaniment to lamb, in this case the complements were arugula, pickled ramps, goat cheese and strawberry jam.

Peanut butter, too. Speaking of classic combinations, American consumers naturally associate jelly with peanut butter. Southern-California-based Slater’s 50/50, one of the early entrants in the better-burger derby, taps into tradition with a peanut-y double header: PB&J is available as a sauce for chicken wings, as well as a topper for the Peanut Butter & Jellousy Burger. In Atlanta, The Vortex, a long-running beer-and-burger joint, dishes up the Fat Elvis Burger replete with smooth peanut butter, bacon and a pile of fried bananas; across town, The Shed at Glenwood offers the PB&J Slider garnished with chopped peanuts and housemade jam.

Separately and together, peanut butter and jelly have made the scene in a number of innovative menu mash-ups. At Bazaar Meat by José Andrés in Las Vegas, waffles meet foie gras in the Foieffle made of air waffles, foie espuma, peanut butter and honey. East of Chicago Pizza, based in Lima, Ohio, hit a dessert home run some years back with its popular PB&J Pizza, and the Fried and True Food Truck in Austin, Texas, turned heads with Deep Fried PB&J, where sandwich met deep fryer in the kind of unexpected, wild-and-crazy treatment beloved by state-fair devotees everywhere.