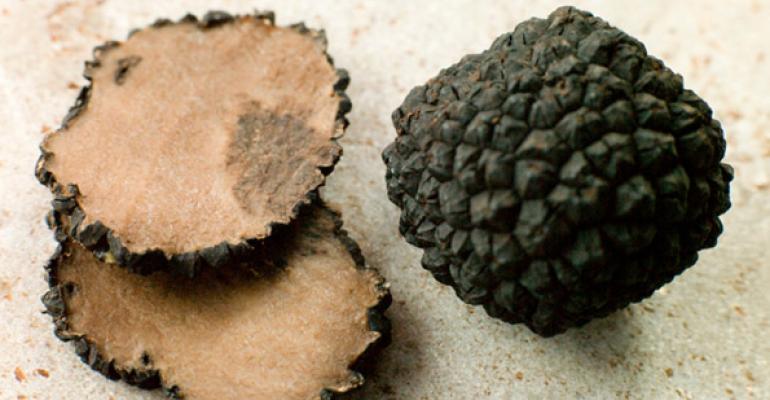 The earthy-flavored rare fungus, whether black or white, are turning up everywhere

Consumers are being wined and dined to a fare-thee-well as restaurateurs seek to maintain positive sales momentum and obtain competitive advantage. According to research by The NPD Group, the use of attractive ingredients is the best way to elicit an order and is far more impactful than price in the purchase decision. Operators have taken this to heart and expanded their pantries to include a wide range of alluring, premium foodstuffs aimed at promoting patronage. One ingredient in the spotlight of late is the truffle, a rare fungus prized for its subtle earthy flavor and aroma that grows underground near the roots of trees and is sniffed out by specially trained pigs or dogs. Harvest is typically slow and laborious, making the product all the more expensive and desired. This year, however, a bumper crop of white truffles from Italy and increasing supply of domestically produced black truffles has caused prices to plummet and interest to soar. Whether black or white, truffles are turning up everywhere.

Fungus among us. Independents have embraced the truffle with gusto. State Grill and Bar in the Empire State Building in New York City promotes Black Truffle Fridays with special four-course dinners, while Sotto Sotto in Atlanta sends out continuous updates on the frequent arrival of prized Italian Alba white truffles. Enhanced availability has led to some unexpected and playful dishes. GCDC in Washington, D.C. offers a take on poutine using potato tots topped with mushrooms and bacon and doused with truffle oil, and Montrio Bistro in Monterey, Calif., treads a similar path with Truffle Tater Tots with shaved truffles and Grana Padano cheese. Stella Barra Pizzeria, with locations in Hollywood, Calif.; Santa Monica, Calif.; and Chicago, features an indulgent Shaved Mushroom Pizza made with Gruyère cheese, melted onion and truffle. And it’s a case of truffle mania at NoMad in New York City, where roast chicken is stuffed with foie gras, truffle and brioche. The chicken potpie there is served with a side of truffle butter, and the chicken sandwich sports truffle mayo on top and chopped black truffles in the bun.

These days it seems that no beverage is safe from the addition of savory ingredients, and in November, Moody Tongue Brewing Company in Chicago held an online lottery awarding 500 lucky winners the chance to purchase a bottle of its Shaved Black Truffle Pilsner for $120 each. Made from Australian black truffles, the beer later went on sale at selected restaurants.

Chains go underground, too. Perhaps more noteworthy has been the broadly based adaptation of the truffle by chain restaurants.  Smashburger, for example, menus a Truffle Mushroom Swiss Burger with truffle mayo and sautéed baby portobello mushrooms, and French Fry Heaven, a chain of Belgian-fry specialists based in Jacksonville, Fla., provides black truffle salt as a topping option. Bonefish Grill introduced a Wood-Grilled Steak entrée, served with a variety of sauces including white truffle butter, and Del Frisco’s Grille offers Food to Fight Over, an assortment of shareable appetizers like Deviled Eggs with truffle-chive butter.

Truffles have a special place in Italian cookery, and Romano’s Macaroni Grill has long taken advantage of that connection. Prior years have seen specials like Parmesan-Crusted Veal Chop with truffle-mushroom demiglace, and the current bill of fare boasts Mac & Cheese Bites with truffle dip, as well as Butternut Asiago Tortellacci, four-cheese pasta with butternut squash, prosciutto, Parmesan and Asiago-truffle sauce. The Small Plates menu at California Pizza Kitchen features Bianco Flatbread made with whipped truffle cream, Gorgonzola and mozzarella cheeses.

Looking ahead, truffles will likely maintain their presence on menus as domestic suppliers ramp up production of both black and white varieties. Tricky and time consuming to cultivate, they are also cash and labor intensive. None of this has stopped would-be truffle tycoons. The annual Napa Valley Truffle Festival, now in its fifth year, combines world-class cuisine with cutting-edge science; sponsors seminars on topics like cultivation and dog training, and serves up truffles for breakfast, lunch and dinner. A similar event, the Oregon Truffle Festival, touts the Joriad North American Truffle Dog Championship, a sporting event that recognizes the truffle hounds with the most sensitive sniffers.