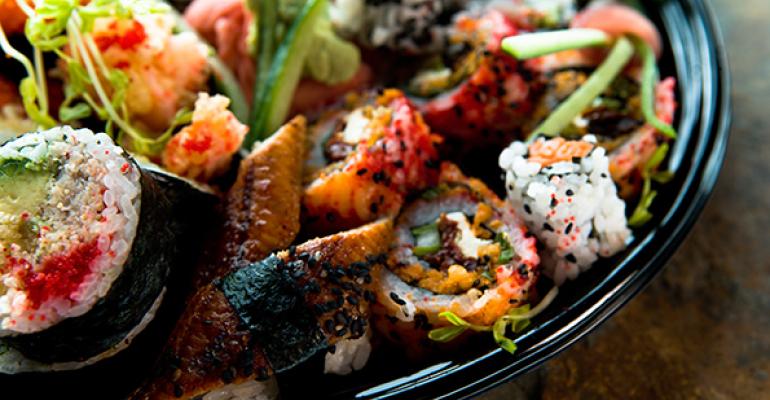 In a monthly series, menu trend analyst Nancy Kruse and NRN senior food editor Bret Thorn debate current trends in the restaurant industry. For this installment, they talk about the evolution of fusion cuisine.

Bret Thorn: Nancy, lately I’ve noticed a lot of chains introducing what are being called “culinary mashups,” in which different dishes from different cuisines are fused together. There’s the nacho burger at Applebee’s, and the cheeseburger burrito at California Tortilla, and a chain based in Boston called Boloco that last November introduced the Late November Burrito, which is basically a Thanksgiving dinner wrapped up in a tortilla. They might be called mashups, but it seems to me that it’s the same thing as fusion.

Nancy Kruse: I agree with you, Bret. But while a lot of people might tout the return of fusion, from my point of view it never really went away. In fact, I think fusion is really fundamental to American cuisine. From the time the first wave of immigrants arrived on our shores, they had to integrate their native foods with the ingredients that they found here. All of this came together and we ended up with a population of American consumers who were absolutely comfortable with the notion of what we’re now calling fusion.

Listen to Kruse and Thorn's conversation>>

Thorn: That reminds me of an origin story I heard about corned beef and cabbage: Irish immigrants to New York saw Jewish corned beef and thought it would be a good substitute for the “boiler bacon” they cooked with cabbage.

Kruse: That’s kind of like Italian-American cuisine, a lot of which started on the Lower East Side of New York, where Italian immigrants found some new things that they hadn’t worked with before.

Thorn: Or the spicy tuna roll. I’ve heard different stories about how it originated but the one I believe the most is that a Mexican-American in Los Angeles created it.

Kruse: Something like that is probably what gave rise to an item on the menu at one of Guy Fieri’s restaurants. It’s a sashimi wonton taco.

Thorn: He also has Italian nachos in his restaurant here in New York City. They’re pretty good. Their flavor kind of reminded me of packaged pizza rolls.

Thorn: If my sources are correct, the term “fusion,” when it comes to food, goes back to the 1980s and was derived from the idea of fusion jazz, which is a combination of jazz and rock. Chef Norman Van Aken, one of the members of the Mango Gang in Miami, took a look at the various Caribbean cuisines around him and applied his fine dining techniques to local dishes, and called it fusion. Then the term evolved to mean any combination of whatever different cuisines people felt like mixing together.
But the term fell out of fashion pretty quickly, and people started talking about “fusion confusion.”

Kruse: That’s because so much of it was so badly done. While Norman Van Aken was really at the forefront of the whole fusion movement in South Florida, on the West Coast at about the same time Wolfgang Puck was doing similar kinds of a gastronomic tricks with Chinese and French and California ingredients at his restaurant, Chinois On Main. They mixed a fundamental understanding of technique with a fundamental respect for ingredients so that when you got to the finished dish it was greater than the sum of its parts.

I think the “con-fusion” arose when chefs who didn’t have the talent, the discipline or the experience went overboard. I’m thinking of very young chefs trying to establish themselves and pushing the envelope a little bit too hard so that you ended up with fusion dishes that were self-conscious, expensive or unpalatable.

I think one of the byproducts of that backlash against fusion was a re-emphasis on the importance of basic techniques as a starting point for whatever you’re going to do in the kitchen, fusion or non-fusion.

Thorn: So, you might start out with classic French techniques and then realize, as Jean-Georges Vongerichten did, for example, that soy sauce and butter are delicious together. But he already had that culinary foundation and so could expand the palette of ingredients he was working with.

Kruse: Right. I think those chefs have a basic respect both for the fundamental elements of the cuisine and for the ingredients they’re working with.

Thorn: Even though fusion cuisine gets a bad rap, it keeps coming back. Why do you think that is the case?

Kruse: The first reason is globalization. We tend to think of globalization in terms of influence on business sectors like manufacturing or finance, but in fact it’s had a real impact on our pantries, opening the door to a whole new world of herbs and spices and sauces and so on.

I also think there is a whole new generation of chefs who missed out on that era of con-fusion and they’ve been very smart about their approach to mixing and matching and playing with food. I’m thinking specifically of somebody like chef José Andrés, who has a place in The Cosmopolitan in Las Vegas called China Poblano. On the website, he talks about how he’s put two cuisines together. “They live side by side, not as fusion, but as an amusing mix of elements from both Latin and Chinese traditions.” I can’t think of too many chefs besides José Andrés who could get away with making a statement like that, but I think it speaks to his pragmatic and open-minded approach.

And finally, there’s a whole new generation of diners, many of whom grew up in homes that had mixed culinary traditions. I think they‘re very comfortable with chefs who will follow that same path. In New Orleans, there’s a very hot operation called MoPho, which is Southeast Asian food by way of New Orleans, so you find stuff like grilled chicken paillard with baby mustard greens and nuoc cham vinaigrette, which is based on Vietnamese fish sauce.

Thorn: Do you think the success of places like that flies in the face of the notion that restaurant goers are looking for authentic food? I’m not sure what the word authentic means, but how can you have something that is simultaneously authentic that also blends the cuisines of different cultures together?

Kruse: It’s not really an either/or proposition. American consumers are very good at behaving in contradictory ways when it comes to food consumption, and to me the notion of fusion, whether you call it fusion or mashup or whatever, is going to cook right along on one track, and riding alongside it on a parallel track will be demand that will probably grow for authenticity.

Kruse: And doesn’t that take us back full circle to where we started when we were talking about how American cuisine at its very core is by nature a fusion, a mashup, a conglomeration, a real melting pot? And maybe the term authenticity doesn’t really ever need to be brought to bear relative to those kinds of items because they’re truly American whether they’re authentically Japanese, Italian or anything else.

Thorn: And maybe we also don’t necessarily need to worry about whether something is fusion or not. I mean, it is food that tastes good, and wherever it might come from doesn’t necessarily make any difference. Maybe we will someday enter a post-fusion era where we don’t even think about it.

Kruse: And that’s a good thing because it’ll also then probably be the post con-fusion era, and everyone will be so relieved to hear that.