From poutine to pizza, potatoes get new treatments

Potatoes are the OGs of the side-dish menu; ubiquitous and familiar, they dominate the category.  The Idaho Potato Commission reports that Americans consume a hefty 111 pounds per capita each year, making it our favorite vegetable by a wide margin. All of which renders the current wave of innovation especially noteworthy. Rather than breeding complacency on the part of chefs and restaurateurs, familiarity is spurring creativity.

French fries are getting a second wind. They address patron interest in shareable finger foods, can function as appetizers, on-the-go snacks or small meals. As part of the poutine craze, operators are using fries to deliver the ethnic flavors that consumers crave.

Related: Which Wich to roll out fries

Originally a dish from Quebec made of fries topped with cheese curds and brown gravy — a sort of north-of-the-border version of chili cheese fries — poutine is being modified to fit current trends.

A good example of that is Kimchi Fries, a summer special at casual-dining chain  P.F. Chang’s, based in Scottsdale, Ariz., that comprises steak fries smothered in kimchi, edamame, cheddar and mozzarella cheeses, gochujang and a dollop of mayonnaise.

Then there’s Milton’s Cuisine & Cocktails in suburban Atlanta, which takes inspiration from a different part of the globe; the Salt & Vinegar Fries sport togarashi, a Japanese chile-based spice blend. It’s not poutine, but it still brings in ethnic flavors without the sauce.

Fries with a superabundance of toppings have been trending for some time, and Arby’s loads up Loaded Curly Fries with pepper bacon, Parmesan peppercorn ranch and Cheddar cheese sauces.

Chefs provide culinary touches. Fool’s Errand in Boston bills itself as an adult snack bar and features a Crispy Potato Mille Feuille, a take on the classic French layered pastry, that can be topped with raclette cheese and truffle, sour cream and caviar or lobster gravy. Also in Boston, Pagu, a Japanese-Spanish tapas restaurant, serves Hasselback Patatas Bravas. Hasselback is a technique in which the potatoes are sliced almost, but not quite, all the way through. The resulting accordion folds make for an arresting presentation and appealing texture, as the potato is crispy on the outer edges, but creamy on the inside. Pagu’s version comes with house-made hot sauce, aïoli and togarashi. 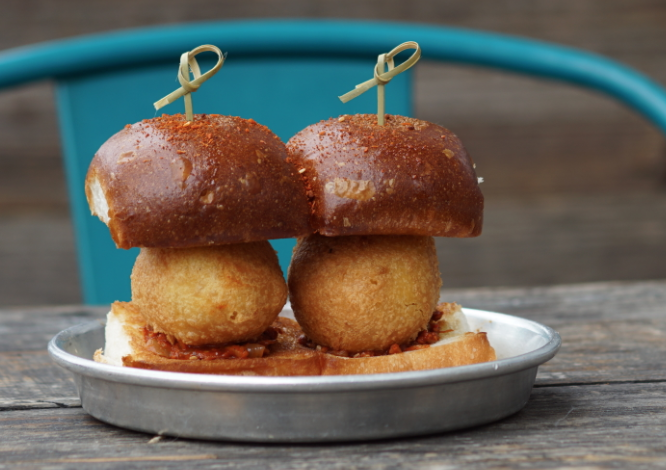 Potatoes are naturals on vegetable-forward menus. Smart operators are taking advantage of both their nutritional benefits and blank-slate versatility as a starting point for invention. James-Beard-recognized Vedge in Philadelphia features a seasonally changing menu that has included fried potato salad with green curry, and a fun Potato Lo Mein, in which shredded potatoes stood in for the conventional noodles and were finished with a sweet-sour glaze.

Plant-oriented fast-casual restaurants pay homage to the popularity of the French fry with some clever twists of their own. New York City-based By Chloe, for example, features vegan treats like Oh So Fancy Fries that are air-baked and covered with spicy seitan chorizo, whisky onions, chipotle aïoli and cashew mozzarella. Veggie Grill, based in Culver City, Calif., spiffed up its regular crispy fries last year with promotional Kung Fu Fries in which Kung Fu crumbles made from meat-free Gardein, Kung Pao sauce and pickled Fresno chiles delivered a kick of heat that was balanced by avocado sauce.

Looking ahead, ready availability and consumer acceptance will continue to provide the impetus to operator experimentation with potatoes. They will turn up more often in applications unfamiliar to American diners, like the Potato Salad Sandwich at Peach Mart in New York City, which puts creamy potato salad with house-pickled jalapeños and dill pickles between slices of soft, white Japanese milk bread. Emerging fast-casual chain Curry Up Now’s Indian street-food menu proffers Vada Pav, in which a buttered bun is stuffed with mashed potato fritters, garlic chutney and Bombay dust.

Potato as a pizza topping gets surprisingly little play in the U.S, though it’s front and center at Sauce, which is headquartered in Phoenix, where the Rosemary Potato Pizza comes with spinach, feta cheese, olive tapenade and truffle oil. And spuds make super stuffers for tacos, too, as with the Potato & Poblano Taco at Chicago’s Antique Taco, which is crowned with three cheeses, chipotle crema, and scallions. Slivers of potato skin provide a pleasing pop of crunch.

Nancy Kruse, president of the Kruse Company, is a menu trends analyst based in Atlanta. As one of LinkedIn’s Top 100 Influencers in the US, she blogs regularly on food-related subjects at linkedin.com.