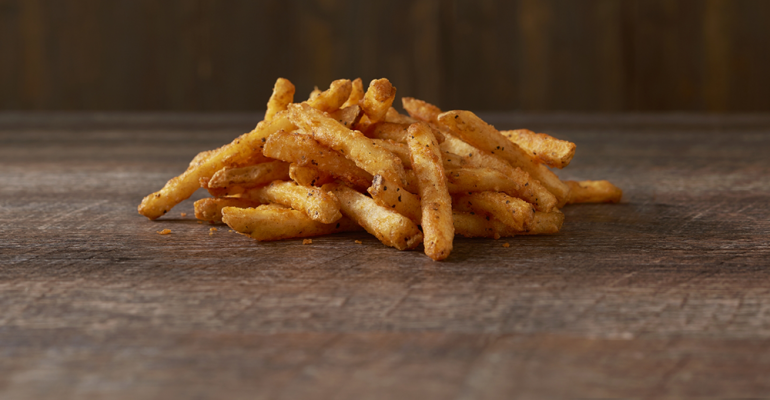 In this special report, we highlight some of the unsung heroes in culinary innovation. Read more about creative approaches to five signature menu items here.

For decades, French fries have been the most popular side dish in the United States: For the year ended February 2019, Americans ordered 10.7 billion servings of fries in restaurants, according to consumer research group NPD, which also said that 18% of all restaurant orders include fries.

So you’d think there would be a consensus about the ideal way to make them. But quite apart from different consumer preferences between thin and thick, straight and curly, crispy and tender, not to mention variations such as crinkle-cut and waffle fries, operators continue to innovate around how to create the perfect fry.

Like many independents, Chaval takes its fries through several steps before they're ready to eat.

Most of the fries consumed are frozen: About 17 billion pounds of frozen potatoes are produced each year, according to the U.S. Department of Agriculture. There’s a good reason for that, said Scott Redler, co-founder and chief operating officer of Freddy’s Frozen Custard & Steakburgers, a quick-service chain based in Wichita, Kan., with more than 300 locations in 31 states, that has a cult following for its fries.

“A fresh French fry will be the best fry you’ve ever had, and the worst fry you’ve ever had,” he said. With so many variables in play, Redler said he’d rather have potato experts do the work for him. “We are a believer that we’ll let the professionals harvest the product when the sugar content is perfect and freeze them at that point so we can get excellent fries out to our guest every day, every time,” he said.

But some chefs say they’ve perfected the process for making great fresh fries, like Michael Kornick, chef and owner of DMK Burger Bar, which won the award for “Best Fries in Chicago” from Chicago Magazine. (Examples are pictured below.)

He has two dedicated fryers for his fries, and like many chefs he fries them twice.

Others, probably most famously British chef Heston Blumenthal, blanch their fries first in water before cooking them twice in oil.

“That doesn’t work well for me,” Kornick said.

Instead, he starts with “a good aged Russet potato,” one in which its natural sugars have started to convert to starch — ideally about 6 to 8 weeks. “When we have to make a transition of potatoes, we get a three- to four-week warning [from our supplier],” he said.

He cuts the potatoes, rinses them in cold water and then brings them to room temperature so they don’t reduce the temperature of the frying oil more than necessary.

Then he blanches them in vegetable oil with a little beef tallow added for flavoring at 225 degrees Fahrenheit for around two and a half to three minutes. To test if it’s done enough, the cook removes one fry and bends it to see its break point, and then bites into it: It should be just slightly undercooked.

They’re stored in covered tubs and kept at room temperature until service. Then they’re fried in the same oil at 370 degrees for three- to four minutes.

Kornick said the fries benefit from returning to the same oil because the initial cooking adds a little potato flavor to the oil.

“When the oil’s brand new and fresh, it’s almost sterile,” he said. 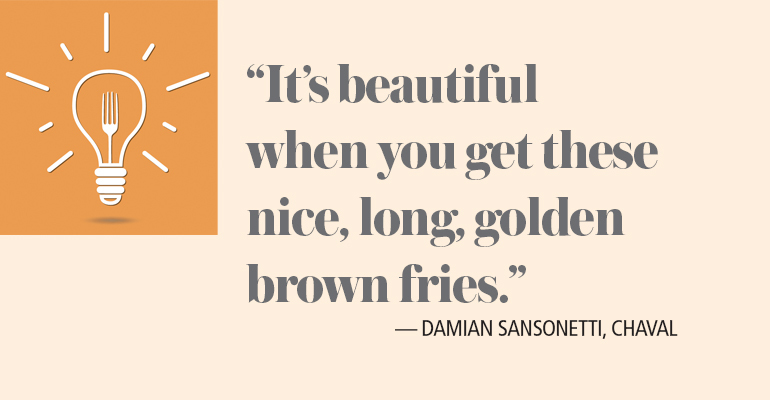 He said a good fry starts with the potato, and he uses local Norwiss potatoes when they’re in season, and the rest of the year he uses GPODs from Idaho.

Sansonetti and his staff cut the fries a bit thicker than shoestrings — thick enough so you can get a good crust while still having soft potato inside.

He soaks the potatoes overnight, and then on the morning rinses them and soaks them again for between 30 minutes and 45 minutes, changing the water two to three times to remove all the excess starch. Then he cooks them in 300-degree oil just until the fries get firm and form a slight crust, but before they take on any color — around three to six minutes, depending on the potato.

“It’s something you have to know,” he said.

“The rinsing and blanching [in oil] part is really important,” Sansonetti said, and once the blanching is over you have to treat the fries delicately, to maintain their shape. So he only allows his cook one shake of the fry basket after blanching.

“Again, you get one shake,” Sansonetti said. Then they’re seasoned with sea salt and served.

“It’s beautiful when you get these nice, long, golden brown fries. They stay crispy for minutes afterward, but the inside is soft and fluffy and just delicious — everything you want a potato to be,” he said.

Even with frozen fries, speed of service is key, said Redler of Freddy’s, where the system is set up so that the chain’s shoestring fries are cooked to order for two and a half minutes at 350 degrees and are the last thing to go in the drive-thru bag or the combo basket.

“The first thing that a guest does when they receive their meal, whether in the dining room or the drive-thru, is eat a French fry, so we want them fresh, hot and properly seasoned,” he said.

Sister quick-service chains Checkers and Rally’s take a different approach to making sure their fries are hot and fresh. Starting, like Freddy’s with a frozen product coated to maintain crispiness, they fry them twice: Once too cook them, and then, as soon as they’re ordered, for another 10 seconds right before they’re served.

There are around 300 Rally’s locations and roughly 580 Checkers restaurants. 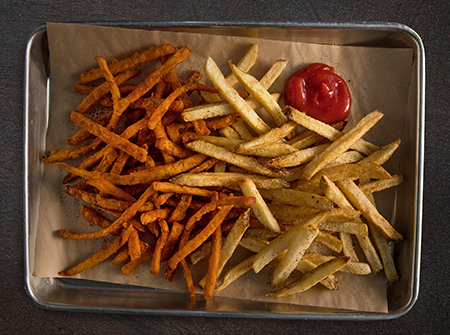 Some chains do use fresh fries, such as Mooyah Burgers, Fries & Shakes (left), a chain of about 90 units based in Plano, Texas.

They are not messing around.

They use No. 1 Russet potatoes, “and that’s a non-negotiable,” said vice president of operation Mike Sebazco. He uses one of two varieties, Burbank for the nine months they’re available and Norkotah for the rest of the year.

“Norkotah’s heartier, but it doesn’t have the solid content of Burbanks, so you have to adjust the process,” Sebazco said.

That process includes hand-punching the potatoes into 3/8-inch sticks, with specific and proprietary specs on how to wash the potatoes both before and after punching them.

Then, as with other fresh fries, they’re par-fried, cooled and par-fried again (for proprietary time and temperature).

But even before the operators punch the potatoes, they measure their glucose content using the same strips that diabetics use to test their blood sugar.

“It’s a little pricey, but it’s worth it,” Sebazco said. That’s because potatoes’ starch-to-glucose content is a crucial factor in making good fries. If the glucose goes above a certain level, the operators let them rest at room temperature to let some of the sugars convert back to starch — they’ll even simmer the potatoes, without boiling them, under extreme circumstances, to bring the starch level back up, he said.

He said the persnickety nature of his French fry process serves a dual purpose: Not only does it make for great fries, but it keeps his cooks engaged.

“They’re way smarter than I was back when I was front-line,” he said. 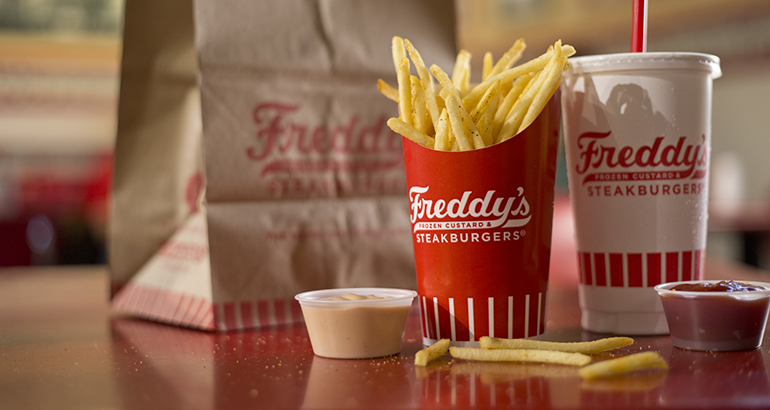 At Freddy’s, fries are the last thing added to the basket or bag, so they reach the guest fresh and hot.