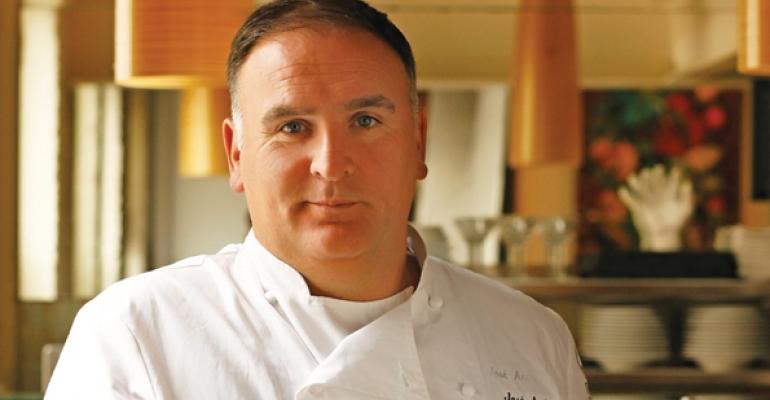 Nation&#39;s Restaurant News salutes culinary creativity with its annual MenuMasters Awards. Honorees will be celebrated at the Drake Hotel in Chicago on May 18. Read in-depth profiles of all 2013 winners &gt;&gt;

Fresh off an April trip to Spain, chef José Andrés is bemused when a reporter asks if he enjoyed his vacation.

“Vacation? No, it was not a vacation. I created two concepts based on my time in Spain,” said Andrés, matter-of-factly. The president of ThinkFoodGroup, a high-end multiconcept restaurant firm in Washington, D.C., Andrés said if he’s awake, he’s absorbing inspiration for new restaurants.

“It was great because I had the time to think, take photos and video, and work on ideas,” he said. “Now, I drop them on the team and start giving them my vision to put some form to this.”

Just then, he covers the mouthpiece of his telephone and delivers a muffled explosion of Spanish to someone in his office. When he returns to the phone, he’s on a new and unbidden tack: creativity.

“We are a place where ideas flow, and we spend a lot of time creating,” Andrés said. “But even though some say we have a lot of concepts, to me, we don’t have enough.”

Thirteen exceptional restaurant concepts are more than enough for most chefs, yet Andrés is clearly drawn to establishing new ones. But where some appear to be compelled to expand an empire for money or fame, Andrés seems unable to resist the opportunity to teach diners new lessons on food from his restaurant classrooms.

“José has 25 different things going on at the same time because he’s the most relentlessly curious person I know,” said Anthony Bourdain, chef turned author and TV personality, whose new show, “Anthony Bourdain: Parts Unknown,” launched in mid-April. “The guy is a force of nature who goes and goes and goes all day — and then all night long. But he’s always in good cheer about it. I’ve never heard him say a cynical or mean thing.”

Given the pace of his days, Andrés likely has no time for meanness. In addition to development and oversight of some of America’s most notable restaurants — his first, Jaleo, just celebrated its 20th year in operation, and his latest, the molecular gastronomy showcase Minibar, opened in 2003 but “reinvented” in 2012 — the James Beard Award-winning chef has hosted TV shows and delivers lectures regularly at The International Culinary Center, Harvard University and George Washington University. Not bad for a man whose formal education growing up in Barcelona, Spain, ended in eighth grade.

“To him it’s not about handouts or just dropping food in a place,” MacNair said. “He empowers them to cook for themselves. He sees the solution as helping local agriculture and local cooks for the long term.”

Rob Wilder, ThinkFoodGroup chief executive and Andrés’ longtime business partner, recruited Andrés to be Jaleo’s first chef at age 23. It wasn’t long before Andrés proved himself worthy of a share in the business, and then an equal partnership.

“Of course he’s a brilliant chef, but he also is an incredible entrepreneur and leader in his own right,” Wilder said. “His passion for learning about food, other cuisines, history and how it’s impacted food, that’s always running through his brain.”

And it keeps Rubén García on the run. As ThinkFoodGroup’s research and development director, García is Andrés’ field marshal, charged with taking his boss’s battle plans to the troops.

“He does make the final decisions after giving shape to his dreams, but the idea flow is really two way,” said García. The walls of the company’s research office, dubbed ThinkFoodTank, are covered with endless ideas, he said. “But what’s powerful is he gives the [R&D] team freedom to develop those ideas by themselves. It’s a fun job.”

Despite Andrés’ free-flowing consciousness, García said his boss is incredibly organized, requiring every finished idea be dated, filed and categorized. That system likely was learned during his time at elBulli, the renowned molecular gastronomy restaurant in Roses, Spain, where Andrés worked alongside chef Ferran Adrià a quarter century ago. Adrià — for whom García also worked — said Andrés’ success is nearly a given for someone so talented and diligent.

“José has always been a great entrepreneur and businessman … who knows how to combine his passion for cooking with his vision for the business,” Adrià wrote in an e-mail. “He makes it possible to create a business model rooted in successful gastronomy. I haven’t been surprised at all by his achievements.”

Regarding his time at elBulli, Andrés said, “Ferran is like dark matter, and elBulli was the big bang,” he said. “I’m just one planet that came out of that big bang.”

Andrés said all his restaurant concepts “are my favorite,” but admitted, “Minibar is my baby.”

Yet the dialogue shifts quickly from what his restaurants are to what all restaurants should be: better caretakers of their employees and the hub of a “360-degree, three-dimensional integrated system” that feeds the earth sustainably and its end users nutritiously.

“The choices we make as an industry are like voting: They show what we believe,” Andrés said. “From independent restaurants to big chains, we need to make the right decisions about how we pay our people and how we feed our customers. … If we do the right things for the earth and everyone here, we’ll have an amazing Earth.”

Eric Ripert, partner and executive chef at Le Bernardin in New York, said Andrés’ sincerity about his many causes is beyond question. He said his friend doesn’t just show up for photo opportunities at social-cause events — he leads them and expands their reach.

“He is active in his own community and also worldwide. He’s genuinely generous,” Ripert said. “The guy is so hardworking that he’s capable of doing so many different things and succeeding in all of them. … Phew! Better him than me, because I don’t see how he does it!”