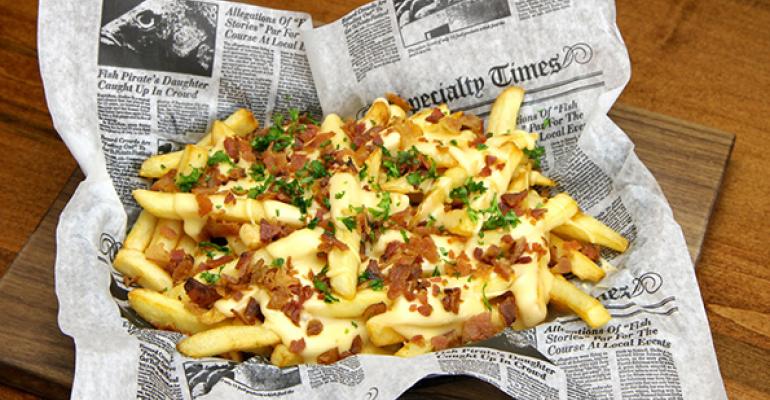 Consumers load up on topped fries

Take America’s favorite side dish, put things like bacon, cheese and gravy on top, and you have one of the country’s hottest food trends.

Whether you call them disco fries, chili-cheese fries, loaded fries, poutine or anything else that implies fried potatoes with stuff on top, customers are clamoring for them.

At the recent MUFSO conference in Dallas, Datassential’s Dave Jenkins pointed to broad trends that were key factors in a menu’s success. The trends included allowing customers to build their own menu items, offering culinary mashups such as barbecue pizza, and providing new beverages for Millennials, such as better-for-you sodas and craft beers.

Also on that list of broader approaches was the seemingly narrow category of “topped fries.”

But gussied-up fries are now a phenomenon that appeals to a wide variety of customers, and many operators like them because they can use ingredients they already have and combine them for a profit.

“Everyone loves fries, and topping them with other ingredients people love — cheese, bacon, garlic — is really a no-brainer,” Jenkins, managing director for client solutions at the menu research firm Datassential, said in an email. He added that fries are already on most menus, and putting toppings on them attracts customers’ attention and allows restaurants to charge more.

“What’s more comforting than a potato?” said Ian Boden, chef-owner of The Shack in Stanton, Va., a 26-seat restaurant that has helped attract food enthusiasts to visit the Shenandoah Valley.

“I always have to make extra French fries on the pickup because everyone in the kitchen wants to eat one. Potatoes make people happy, always.”

They’re also inexpensive, and by putting trim from other dishes on top of them, he can add to their appeal, charge more and make use of food he already has on hand.

For example, a local farmer used to send belly flaps attached to the lamb racks and loins that Boden would order for events as a gesture of goodwill, and because the farmer was having trouble selling the bellies.

Boden braised the bellies with dried red chiles — “It was like a Mexican chile sauce, and hot as hell,” he said. He put the braised bellies on top of double-cooked fries along with garlic aïoli and dried, house-made buttermilk ricotta.

The result was a type of poutine, a specialty from the Canadian province of Québec comprised of fries, cheese curds and a fairly acidic gravy.

Poutine is becoming increasingly widespread on menus, according to Datassential, and now appears on 468 percent more menus in the United States than it did four years ago.

Still, poutine is on only 1.6 percent of all the menus that Datassential monitors, and it’s not usually on the menu at The Shack.

Boden said he has experimented with using the word poutine on the menu — including a North-meets-South one with green tomato gravy, Wisconsin cheese curds and lime-pickled Serrano peppers — but the chili-cheese fries language sells better.

“I love poutine, but no one in Stanton knows what it is,” Boden said. Fortunately, his sous chef pointed out that “chili-cheese fries” are basically the same thing.

“We put poutine on the menu and it doesn’t sell, and then we [change the name to] chili cheese fries and it sells like that,” he said.

Some chains, however, are branding their menu items as poutine these days. Old Chicago Tavern and Taproom, a 97-unit chain owned by CraftWorks Restaurants & Breweries Inc., currently has a Buffalo Poutine as part of its football season promotion, only available on game days. The item is made of French fries smothered in Buffalo sauce-spiked gravy and topped with Buffalo-sauce-covered fried cheese. The dish also has diced tomatoes, green onions and additional Buffalo sauce.

Elliot Jablonsky, the executive chef of Buffalo Wings & Rings, a 60-unit chain based in Cincinnati, said he’s planning a poutine for his next menu. But for football season, Jablonsky has a loaded tater tot called the Potato Pile On. It’s shredded potato with bacon, a blend of Cheddar and Monterey Jack cheeses, and a little egg white. That’s all folded together, scooped into a tater tot, fried and served with avocado, sliced jalapeno, cilantro and chipotle ranch dressing. “It’s almost like an inversion of a stuffed potato skin. It works really well,” he said.

“The most craveable starch, outside of maybe bread, is the potato,” he said. “You melt cheese on it and add a little salt, and you’re hitting craveability on a whole bunch of cylinders.”

This year has seen a burst of creativity when it comes to fries with food piled on at chain restaurants.

Wendy’s has included fries with cheese on top on numerous promotions recently, including the Ghost Pepper Fries it introduced at its 5,750 domestic chains in April. Ghost Pepper Fries are made with fries in cheese sauce topped with diced jalapeños, shredded Cheddar cheese and ghost pepper sauce. The item was offered as part of a spicy promotion, along with a Jalapeño Fresco Spicy Chicken Sandwich, which also had cheese sauce and ghost pepper sauce.

Del Taco, a 546-unit chain based in Lake Forest, Calif., used items on hand for the Bacon Chipotle Cheddar Fries it offered as a limited-time offer this summer. They were crinkle-cut fries with nacho cheese, grated Cheddar cheese, creamy chipotle sauce, diced tomatoes and bacon pieces.

This summer, Charleys Philly Steaks, a 540-unit chain based in Columbus, Ohio, extended its cheese steak theme with loaded Philly Fries in the spring. Then the operator got a little more experimental with Pepperoni Pizza Fries in the summer, which didn’t require additional ingredients. The Philly Fries were topped with grilled mushrooms; onions; green peppers; cheese sauce; bacon bits; white American, provolone and Cheddar cheeses; and jalapeño peppers. The Pepperoni Pizza Fries were topped with grilled pepperoni, onions, mushrooms and green peppers, smothered in provolone and Cheddar cheese sauce, and finished with Italian seasoning.

Some chains have gotten seasonal with their loaded fries. Along with Old Chicago’s game-day-only Buffalo Poutine and Red Robin’s Oktoberfest-themed poutine, Shake Shack, the New York-based burger chain with 76 locations worldwide, offered a special St. Patrick’s Day loaded fry from March 13-17 at most of its units. When Irish Fries Are Smiling was made with crinkle-cut fries topped with horseradish cream, scallions and applewood-smoked bacon.

David Groll is all about upgraded versions of chili cheese fries at 28-unit pub chain The Brass Tap, based in Tampa, Fla.

“People like taking fries and dialing it up,” Groll said. He uses the black Angus beef in his burgers to make a chili that’s spiced with trendy Sriracha sauce.

Groll said he’s currently testing them as a potato-based version of nachos, topping his regular and waffle fries with the Sriracha chili along with Cheddar-Jack cheese and diced jalapeños.

“They fly out of the kitchen,” Groll said, noting that people seem to particularly enjoy the nacho fries with beer.

Groll makes chili by cooking the ground beef with browned onions, barbecue sauce and beer, and finishing it with Sriracha sauce. While Groll continues to develop the item, The Brass Tap is currently offering fries topped with beer cheese and bacon or blue cheese and peppadew peppers.

Ryan Joy, senior director of research and development for sister quick-service chains Checkers and Rally’s, started moving toward loaded fries at his drive-in focused restaurants eight years ago. He said they started by dipping fries in a variety of things — cheese sauce, Cheddar sauce with ranch, bacon-coated cheese sauce with ranch and so on.

They were popular in focus groups, but food meant to be dipped presents a problem at the drive thru.

“It’s hard to have your fries, dip it in something and turn on your left turn signal,” he said.

He said that his customers accept the fact that the fries aren’t the tidiest thing to eat in a car.

“We move a lot of those fries during late night and snacking,” he added.