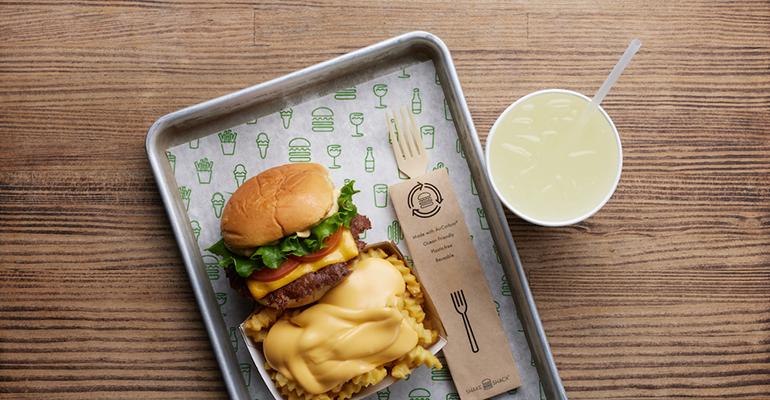 The utensils are made by Restore Foodware in Huntington, Beach, Calif., out of AirCarbon, or PHB — polyhydroxybutyrate — a molecule that’s made by almost all living organisms and melts like plastic but breaks down in the environment just like leaves and stems do, according to Mark Herrema, CEO of Newlight Technologies, which is the parent company of Restore Foodware.

Newlight gets the PHB from oceanic microorganisms that produce a lot of it, and cultivate it in a stainless steel tank. Then it’s filtered, powdered and turned into pellets that can be melted and shaped into utensils.

The cutlery and straw are now available at Shake Shack units in West Hollywood and Long Beach, Calif., Miami Beach, Fla., and at the Madison Square Park and West Village locations in New York City.

“As of now, we’re focused on the pilot. We look forward to hearing guest response and feedback,” he said.

Herrema said the AirCarbon products are priced similarly to other recyclable utensils and paper straws, but he expects prices to come down and production ramps up.

They are certified carbon negative by Carbon Trust and SCS Global, meaning they actual reducing carbon in the atmosphere as they’re produced.

Both initiatives are part of Shake Shack’s “Stand for Something Good” mission, which also includes using naturally raised beef, pork and chicken as well as committing to reducing waste in packaging materials. As part of the mission the chain also vows to support its people and communities around the world.

This story has been updated with clarification on the branding of the Restore Foodware utensils as well the timing of the testing of aluminum water bottles.
TAGS: Supply Chain Operations Technology
0 comments
Hide comments
Related
Sponsored