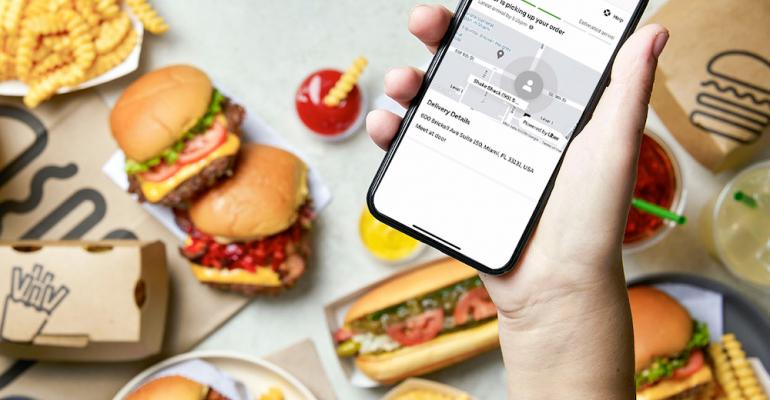 Although the chain already uses third-party delivery services, this is the first time that customers can order delivery via its Shack app.

Guests within the delivery areas of the Shake Shack locations in Mary Brickell Village, Coral Gables and The Falls, all in the Miami area, will be offered a delivery option on the app, and the orders will be delivered via Uber Eats.

Shake Shack said it would expand this pilot program to allow delivery nationwide via the app early in 2021.

Delivery had not historically been a priority for Shake Shack, which is based in New York City, because most of its restaurants were in dense urban areas and shopping locations situated for robust dine-in and takeout traffic. As its customers' demands changed, however, the chain did develop an integrated and exclusive partnership with third-party delivery company Grubhub in 2019. And since March it has brought on Postmates, DoorDash, Caviar and Uber Eats as delivery partners and shifted its arrangement with Grubhub to a non-exclusive one.

Until now, the Shack app had been used for advance ordering that allowed customers to bypass Shake Shack’s often-long lines.

In announcing the pilot delivery program, Shake Shack said that digital sales accounted for 60% of total sales in the third quarter, and that sales through the Shack app and Shake Shack’s web site had tripled year-over year.

“We’re thrilled to introduce delivery through the Shack app, offering our guests a new way to get Shake Shack however and whenever they want it,” says Randy Garutti, Chief Executive Officer at Shake Shack. “With an influx of new and returning guests to our digital channels this year, we’ve accelerated our digital investment. Delivery through the Shack App represents the latest innovation from Shake Shack, and is reflective of our increasing focus on convenience across the broader Shake Shack experience.”

There are a total of 203 Shake Shack restaurants in the United States, and an additional 106 units in other countries.

This story has been updated with a corrected unit count of Shake Shack locations and clarification with regard to its history of offering delivery.
TAGS: Technology Restaurants Ready Delivery & Takeout Solutions
0 comments
Hide comments
Related
Sponsored