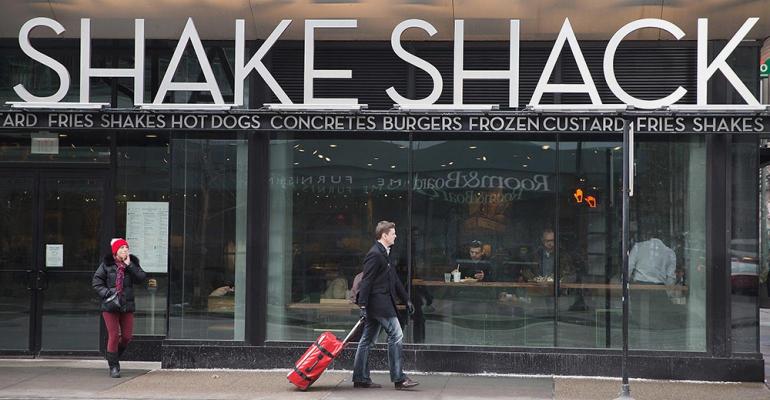 Chain says sales will continue to be severely impacted by stay-at-home orders; some stores could close where to-go sales are not sustainable

Shake Shack, one of the fastest growing brands in the U.S., has halted unit growth, cut 20% of its corporate New York City-based staff and closed access to all restaurants that remain open as the coronavirus pandemic continues to take its toll on even the most successful chains in the country.

The fast-casual burger chain also revealed a drastic plunge in March same-store sales, which decreased 29% compared to the same period last year. The steep drop comes after the brand experienced a 2% decline in same-store sales in the first two months of the year.

When jurisdictions across the U.S. ordered the closure of dine-in operations, Shake Shack, like other restaurants, switched to a “to-go” model of service for a couple of weeks. Initially, that included carryout orders made inside the restaurant.

But in a regulatory statement issued late Thursday, the chain said most restaurants, as of today, are no longer allowing guests inside the restaurants.

Related: Here’s the latest on how the COVID-19 pandemic is impacting restaurant traffic

Shake Shack, founded by legendary restaurateur Danny Meyer, has been especially vulnerable amid the coronavirus pandemic.

Take Domino’s. It has its own fleet of delivery drivers, protecting the brand from profit-hurting third-party delivery fees. The pizza chain said same-store sales through the first quarter ended March 22 slowed but still remained positive at 1.6% for U.S. stores, according to preliminary figures released this week.

Red Robin Gourmet Burgers said it has more than doubled its off-premise sales in the past two weeks, offsetting some of the losses to its dine-in business.

But Shake Shack’s business model is not set up the same way.  Most of the brand’s fast-casual restaurants are in “real estate heavily indexed towards high volume, urban and premier shopping locations,” the company said.

CEO Randy Garutti said Shake Shack was born as a community gathering place, but now people around the world are being told to retreat and "do the exact opposite."

As a result, “the impact to the company will continue to be significant during the period of stay-at-home orders across the country,” the company said.

Garutti said restaurant sales are currently down between 50% and 90%.

“With 9 company-operated Shacks temporarily closed, and the remainder relying solely on to-go and delivery orders, our sales have been severely impacted and we are working to align our operating costs as best we can,” Garutti said in a statement.

Last year, Shake Shack switched to an exclusive delivery agreement with Grubhub, a move that was causing volatility for the company.

With the delivery one of the few options available to serve customers, Shake Shack said it has expanded its delivery partners to include Postmates, DoorDash, Caviar and Uber Eats.

To conserve cash and increase available liquidity, the company has taken other steps including salary reductions for top corporate executives and cutting 20% of its corporate or “home office” employees.

“Furloughed team members will receive ongoing pay through at least April 8 and will have the option to keep or be paid out for earned paid time off,” the company said. Through July 1, Shake Shack said it will pay 100% of medical premiums for furloughed workers.

Some Shake Shacks, where sales are not sufficient to justify staying open, will also likely close. Staffing reductions have also been made, but the company declined to elaborate by how much.

Except for new stores that are near completion, the company said it was also halting new restaurant growth.

“The company does not intend to open any new Shacks at this time,” the chain said.

The forced pivot underscores how the novel coronavirus pandemic has upended unit and sales streaks for some of the most successful and beloved brands in the U.S. For the past two years, Shake Shack has logged record growth both in the U.S. and internationally.

But, as Garutti noted, rapid changes are happening during an “unprecedented time” in the restaurant industry.

“Our message across the company has been to lead with hope, while acting on reality, and to make the necessary choices today to ensure our strength and growth continues for many years to come,” he stated. “We are taking the crucial steps to safeguard the health of our teams and communities, while we work to serve our guests to the best of our ability.”

And, when it's over, Shake Shack will become a gathering place, once again, he said.

"While we expect to feel this impact for some time ahead, you can bet that when the day comes where friends, families, coworkers, travelers and everyone in our community chooses to gather again, Shake Shack will be the place they choose to do so.” Garutti said.