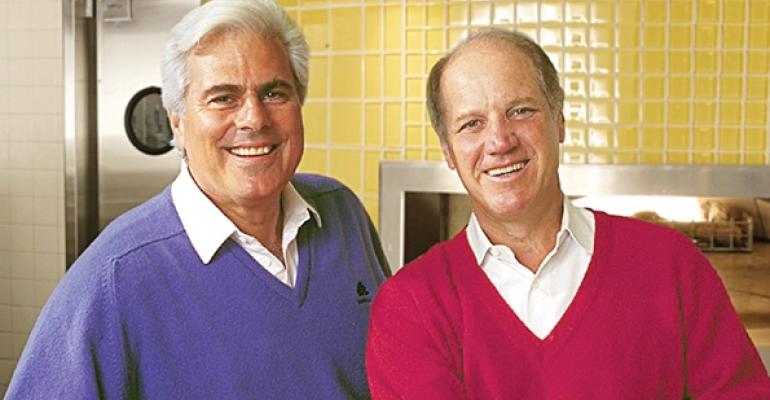 Larry Flax and Rick Rosenfield will debut the brand next year.

The co-founders and former chief executives of California Pizza Kitchen are throwing their hats into the increasingly crowded fast-casual pizza niche.

Larry Flax and Rick Rosenfield said this week they are developing a new fast-casual pizza concept that’s scheduled to debut in Southern California next year.

They have yet to reveal the name of the concept and specific details, but the two former attorneys plan to take advantage of their deep relationships with mall operators and developers, as well as their years of operations expertise in the pizza space.

The new brand will focus on pizza, but the menu will include additional items that will be revealed later. “We will put our own twist on it,” said Rosenfield. “It will be a different twist from anything that’s out there.”

Like the many other chains now hoping to become “the Chipotle of pizza,” the new concept will offer both customizable pizzas and signature products. “You can order certain pizzas our way or your way,” said Flax.

Flax was closely involved with the development of the menu at CPK, and he intends to do the same for the new fast-casual concept. He and Rosenfield plan to bring in a CEO as the brand develops.

While Flax and Rosenfield were at the helm of CPK, the chain opened a handful of fast-casual-like variations called CPK ASAP, which have all since closed or been converted to full-service restaurants. Flax said the ASAP model had a more complicated menu, and the new concept will be very different.

Unlike CPK, which did only limited franchising and was mostly company operated, Flax and Rosenfield plan to expand the new concept as a franchised brand after establishing a base with corporate growth.

“We know from our own experience that the best way to help develop a franchise system is being an operator yourself,” said Rosenfield.

Flax and Rosenfield have longtime relationships with mall operators and developers who are hungry for more fast-casual brands — something that’s key to the concept’s plan.

“We’re going to leverage the contacts we’ve built over 29 years with mall developers in the country. We will tell them we are going into this business,” said Rosenfield. “And I know as a result of that, because of who we are and what we’ve done and our experience and reputation, and their trust in us, I know we will very soon have a pipeline, nationally, of company-owned restaurants.”

The partners said they are very aware of the proliferation of fast-casual pizza players and the “land grab” that has resulted as such chains battle for the best real estate in the quest to expand nationwide. Most have only a handful of units open but boast a pipeline of hundreds, they said.

“We may be, in some people’s minds, late to the game. We don’t think we’re late to the game at all,” said Rosenfield. “I know that our contacts and the handshake relationships we have with all developers in the country will accrue to our benefit here.”

He added, “We’re not looking to rush out and sign a lot of franchisees,” noting that the focus instead is finding great locations and executing well.

About two years ago, Flax and Rosenfield began to get excited about what was happening in the fast-casual segment, where concepts with greater operational efficiency, lower capital costs and a price point that appeals to a broader audience are proliferating. Perhaps most importantly, Flax said he has been impressed by the high quality of food in the fast-casual space.

But retirement didn’t sit well with the two former CEOs, who said they were regularly approached by people who wanted advice, “often for free,” they joked. At their core, Rosenfield said, the two are restaurant operators.
The new concept will be just one aspect of a new business Flax and Rosenfield are building under the banner of Flax and Rosenfield Capital Partners, based in Beverly Hills, Calif., in offices overlooking the original CPK unit they opened in 1985.

While non-compete clauses are common in the industry, the former criminal attorneys said they have no such legal restrictions.

The new firm will look for opportunities to invest in other growing concepts, as well as in real estate, and advise property owners on designing restaurant hubs that pull together synergistic brands.

“What we think we bring to the table is the joint venture/capital infusion part of the business that you see from a lot of these big capital firms,” said Flax. “We bring not only money, but we bring our expertise and advice, and can get more involved in helping young companies grow.”