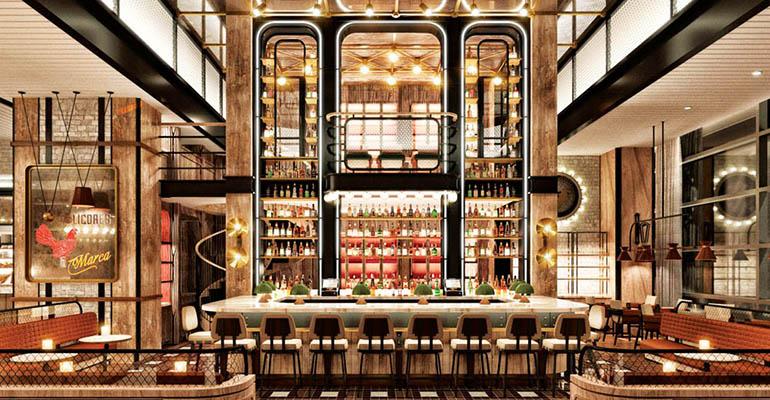 In the pecking order of polished casual dining, Yardbird Southern Table & Bar is poised to rule the roost. With an emphasis on a menus with local twists and lounge-bar areas that serve as attractions in themselves, Yardbird opened its fifth location in Dallas in March and is its sixth in the District of Columbia in May.

Yardbird, founded in 2011, is one of several concepts from Miami-based 50 Eggs Hospitality Group. The concept now has units in Miami, Las Vegas, Los Angeles, Dallas as well as Singapore.

“Yardbird started in South Beach,” said John Kunkel, founder and CEO of 50 Eggs. “I had grown up in Atlanta, Georgia, and my grandparents were from a small town — Bamberg, S.C., which is outside Columbia. All my family is connected to and grew up around Southern culture and cuisine.”

But even with that Southern pedigree, Kunkel said “the only time I had cooked Southern food was at my grandmother’s hip and around family. I was doing a restaurant tour in New York and stumbled upon this really cool little restaurant in Brooklyn called Buttermilk Channel, which was an upscale, chef-driven take on Southern food.

“By the time I got off the plane, I had decided to do the food I had grown up with,” he recalled. “South Beach was probably better known for Red Bull, vodka and sushi than anything else.”

He opened it on a shoestring budget and it “did incredibly well,” he said.

In 2012, Yardbird was a James Beard Award semifinalist for Best New Restaurant.

Kunkel said he incorporated food and a decor that is close to his heart, including his Grandmother Lewellyn’s picture on wall and recipes on menu.

Since Day One, Lewellyn's Fine Fried Chicken with a savory waffle has been a top seller.

“It has developed cult-like following. It really is indulgent, fun and comforting.”

Biscuits are made fresh throughout the day. The Dallas location also has 10 new menu additions and new cocktails.

“Yardbird is meant to be this canvas, of a sort, where we get to explore Southern cuisine,” Kunkel said. “It has all sorts of influences.”

He cited chefs who have brought in newer cuisines like Korean and Jewish as well as standard French-Creole and others.

“We don’t want to be static,” he said. “The days of casual-dining are gone, and we really want to be relevant as a concept.”

With the Dallas opening in March, he added, “We got to reimagine the interior of Yardbird.”

The first Miami restaurant covered 4,000 square feet and had a small outdoor area for seating. The other units hover around 5,700 to 6,500 square feet, Kunkel said, and they all have a proper lounge and bar.

Barn wood and Edison bulbs of the first restaurant have been replace by New York-based Rockwell Design with newer influences, such as a two-story bar with a bourbon tasting area on the second level that overlooks the restaurant. That was inspired by Atlas Bar in Singapore, he said.

“We love to have an open kitchen to show what we do,” Kunkel added.