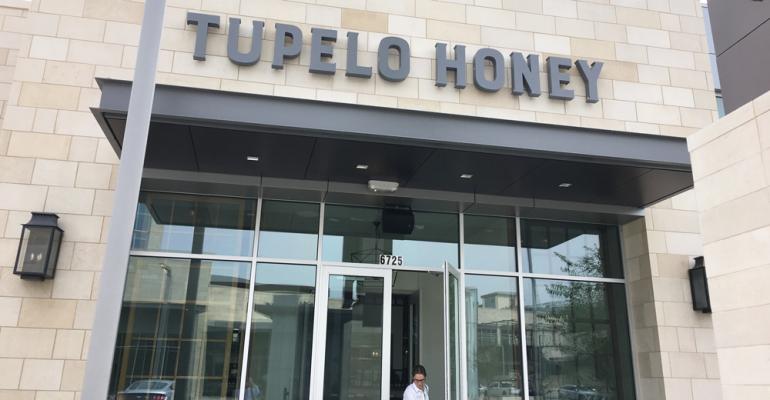 Tupelo Honey Southern Kitchen & Bar on Thursday opened its 15th restaurant, expanding its footprint into Texas after opening earlier this year in Colorado.

The Texas opening was the second this year for the Asheville, N.C.-based casual-dining brand, which debuted in Denver in May. And the 9,500-square-foot restaurant at The Star development Dallas Cowboys headquarters in Frisco, Texas, is the company’s largest unit, seating 362.

Tyler Alford, Tupelo Honey’s vice president of operations, said that not only is the Texas restaurant larger than the concept’s typical 6,700 square feet, but it features some new initiatives like a charcuterie and raw bar near the kitchen, and expanded bar area to highlight signature craft cocktails and a covered patio.

The restaurant also offers private dining spaces that can serve the dual purpose of providing regular service as well as accommodating private parties, he said. “Expanding into Texas was a natural move for the brand,” said Tupelo Honey CEO Steve Frabitore in a statement. “The Dallas/Fort Worth culinary scene is exploding, particularly in Frisco, and we found the perfect location at The Star.”

The original Asheville restaurant opened in 2000, and Frabitore bought it in 2008. The brand has expanded to seven states, including Colorado, Georgia, North Carolina, South Carolina, Tennessee, Texas and Virginia.

Gabrynowicz, who is also the chain’s corporate chef, said he is committed to sourcing as many products as possible locally, including Texas beef and other ingredients, in the newest location.

The Texas restaurant also has an expanded beverage program, Alford said, and will offer promotions like 75-cent martinis at weekday lunches and a group of batch and shareable cocktails that use locally produced beverage brands.