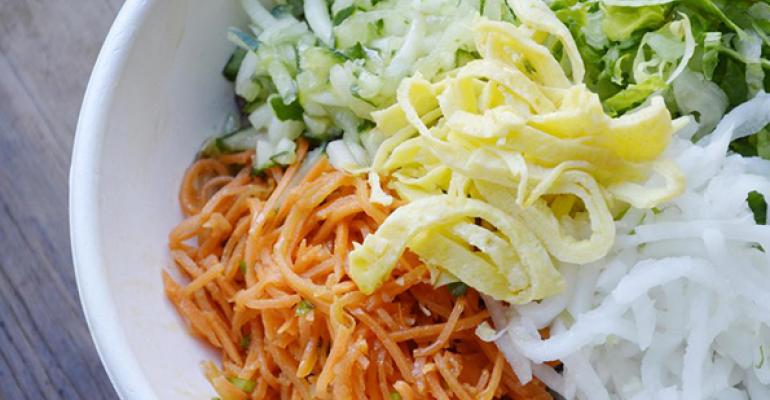 In the growing fast-casual segment, much attention has been given to burger, burrito and pizza concepts. But another niche is building critical mass: fast-casual Asian.

Panda Express, the nearly 1,800-unit chain operated by Rosemead, Calif.-based Panda Restaurant Group Inc., has long dominated the category. But Panda Express’s success, along with casual-dining brands like Benihana, has helped fuel competition, as a growing number of emerging brands look to tap into a perceived hunger for Asian flavors.

Market research firm Technomic Inc. even named fast-casual Asian one of its top 10 trends to watch this year.

“Thanks to chains such as Panda Express and Benihana, Asian fare has become increasingly mainstream,” said Darren Tristano, executive vice president of Technomic and author of a January report on fast-casual Asian concepts. “Consumers today are more willing to be adventurous and try new items. They’re also looking for bolder flavors.”

Tristano said the world of Asian food is an underdeveloped and underpenetrated niche within fast casual that will likely expand over the next few years with the same frenzied pace recently seen among fast-casual pizza chains.

Many of these Asian chains hit on hot-button trends for Millennials in particular. For example, Asian food has a certain health halo, Tristano said. Dishes are customizable and work well in fast casual’s assemble-your-meal format. There’s also a freshness factor, with most dishes prepared to order in front of guests.

Most concepts within the niche offer a broadly pan-Asian menu, including everything from Japanese sushi to pad thai, with the goal of eliminating the veto vote. But some small regional players with a focus on one type of cuisine are cropping up, Tristano noted.

So is Bibigo, a two-unit chain in Los Angeles by Korea-based foodservice company C.J. Foodville Corp., which operates the chain across Asia and the United Kingdom. Bibigo previously had three units, but closed one location in December.

Other Asian chains with established brands in other segments are testing the fast-casual waters.

Yoshinoya America Inc., the U.S. arm of the Japan-based quick-service chain, recently opened a new flagship in Los Angeles called Yoshinoya Japanese Kitchen, which experiments with a fast-casual format. And the parent to the casual-dining HuHot Mogolian Grill chain will open this month a fast-casual variant called NuHu Mongolian Express.

The challenge for the next wave of Asian concepts in the fast-casual space is to communicate authenticity and transparency when it comes to ingredients, Tristano said.

“Both of these can be accomplished by telling the story — operators should explain their history and cuisine, making sure to point out ties to Asia,” such as the use of traditional recipes or owner origins, as well as communicating information about sourcing and the quality of ingredients, he wrote in a recent Technomic ConcepTrac report.

Meet the players to watch in the fast-casual Asian segment:

Denver-based Chipotle Mexican Grill Inc. has set out to prove that its model of customization and sustainable ingredients can be applied to Asian food with its nine-unit ShopHouse Southeast Asian Kitchen, which opened in 2011.

The company operates three units in the Los Angeles area and six in greater Washington, D.C. Company officials say the concept will move into a new market this year, but they haven’t said where.

Like Chipotle, the chain uses ingredients that are sustainably raised and locally grown, when possible, with meat free of antibiotics and growth hormones. The menu focuses on flavors of Southeast Asia, with dishes that can be built on a base of rice, noodles or salad, adding meat or tofu, various vegetables, sauces and garnishes.

“ShopHouse is the one you have to watch, if only because of Chipotle’s success,” Tristano said. “They refine their concepts. They spend a lot of time getting it right, and now they’re starting to open more.”

Founded in Palo Alto, Calif., in 2012, Asian Box is poised for accelerated growth. The five-unit chain expects to reach nine locations by the end of 2015. And in January, parent company Asian Box Holdings Inc. announced an unspecified investment from Horowitz Group that will enable it to expand more rapidly.

Asian Box cofounder Frank Klein said the menu will expand to include pho, as well as more salads and dinner items. Asian Box also plans to roll out new retail products, like bottled sauces and marinades, to build brand awareness.

The concept was founded in 1996 and stayed primarily in Colorado until last year, when the approximately 30-unit chain began to move into Arizona. This year it will add Texas locations to the mix.

Tokyo Joe’s emphasizes healthfulness by only offering grilled proteins. In addition to the build-your-own bowl options, the chain offers made-to-order sushi, which accounts for about 20 percent of sales, Leith said.

“Tokyo Joe’s did the sushi world a favor because we got the masses to try California rolls,” he said.

“I think it’s great,” he said of his growing competitors. “It creates more awareness for the style of food.”

In addition, nearly 60 percent of the chain’s business is off premise, so it didn’t make sense to have such big restaurants, said Randy Murphy, Mama Fu’s president and CEO.

Now Mama Fu’s is moving forward as a fully fast-casual brand, with a 2,000-square-foot to 2,200-square-foot model that “juices the unit economics,” he said.

Twelve units, mostly company owned, are expected to open in 2015, including the first two international units, which will be in the Middle East. Another 20 units are on deck for 2016, a mix of company and franchise locations.

About 30 percent of the chain’s sales come from takeout and another 30 percent from delivery, offering a competitive advantage over fast-casual burger and burrito concepts.