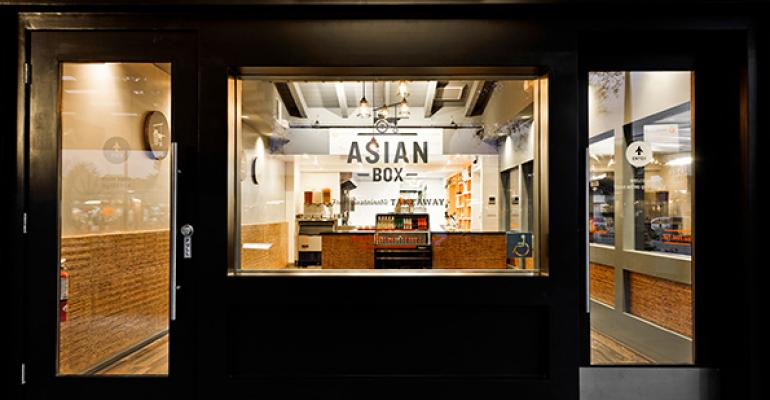 The parent to the fast-casual Asian Box chain has received an investment from Horowitz Group that will help accelerate growth over the next few years, the company said Tuesday.

Asian Box Holdings Inc. cofounder and chief executive Frank Klein declined to characterize the amount of the investment, but he said he is no longer a majority shareholder as a result.

Based in Southern California, Horowitz Group describes itself as a single-family office that invests opportunistically in private equity and real estate. The group was an early capital provider to the emerging Los Angeles-based Lemonade Restaurant Group, as well as brands like the grocery store chain Sprouts Farmers Market and beauty salon chain MiniLuxe Inc.

Founded in 2012 in Palo Alto, Calif., Asian Box has five restaurants in California and expects to reach nine locations by the end of 2015.

The concept offers healthful Vietnamese street food, including meat raised without hormones or antibiotics, housemade marinades and sauces, and a customizable, cooked-to-order menu developed by executive chef and cofounder Grace Nguyen, who previously worked with noted chef Charles Phan at the San Francisco restaurants Slanted Door and the Bush Street location of Out the Door..

“It all starts with the food, and Chef Grace has an uncompromising approach to quality that is apparent in each box served,” Adam Horowitz, president of the Horowitz Group, said in a statement.

“Asian Box has the opportunity to be the preeminent restaurant group in the Asian fast-casual space, delivering high-quality ingredients for time-sensitive consumers at a compelling price,” added Horowitz, who will join the chain’s board of directors. “We are thrilled to partner with an energetic management team and support a restaurant concept with such inspiring cuisine.”

Klein said he couldn’t be more pleased about the partnership and the concept’s immediate potential for growth. All units will be company owned. There are no plans to franchise.

“We had been waiting to get the right partner at the right time with the right valuation, and this was it,” Klein said. “This will give us capital over the next three years to really ramp up openings.”

With the growth planned, Asian Box partner Chad Newton will shift from his culinary director role to one of operational specialist, helping to build teams at new restaurants and develop the chain’s culture, Klein said.

In February, the menu will be expanded to include pho, as well as more salads and dinner items.

In a couple of weeks, Asian Box will roll out new retail products, including bottled sauces and marinades. Beyond that, the chain will soon reveal new non-restaurant partners that will help build awareness for Asian Box as a lifestyle brand, though Klein said it was too soon to offer details.

Klein also declined to offer details on the chain’s sales, but he said the three units open at least 12 months have demonstrated double-digit increases in same-store sales year over year.