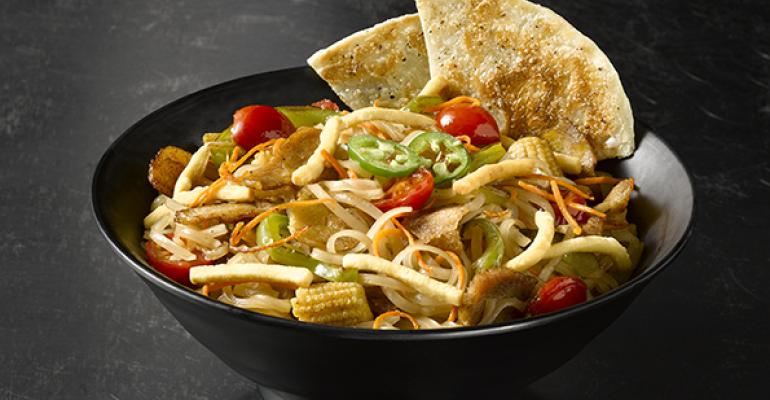 The parent of the casual-dining HuHot Mongolian Grill chain will launch a new fast-casual stir-fry concept on Feb. 12 in Denver.

NuHu Mongolian Express will offer HuHot’s flavors and fresh-to-order cooking in a format with faster service and lower prices.

“We wanted to offer our great food and wonderful flavor profiles in a fast-casual format. We felt the segment plays right up to our strengths,” said Jeff Martin, chief operations officer for HuHot and NuHu.

Guests will be able to customize their stir fry, choosing from an array of noodles or rice, vegetables, proteins and sauces as they walk the service line. Or they can select one of six signature dishes, like the Genghis Thai, NuHu’s version of pad Thai, or Saucy Szechuan, a Chinese-barbecue-style rice bowl with various spicy sauces.

Once ingredients have been selected, “grill warriors” cook the meal quickly at the end of the service line. Guests can further customize their dish at a toppings bar that includes fresh basil, lime wedges and chow mein noodles.

Dishes are served with a signature roti flatbread, also grilled to order.

“Over the last decade, we’ve seen a pretty aggressive push of the American palate toward ethnic cuisines, and Asian is a big part of that,” he said. “There’s a perceived healthfulness, and there’s a freshness associated with Asian flavors.”

Unlike most fast-casual Asian concepts, NuHu cooks its dishes from raw ingredients rather than from hot, held dishes already prepared for assembly, he said.

The stir frying at the end of the service line is quick because of the high heat used, “and guests say it’s really fun to watch,” Martin said.

Prices will range from $6.99 to $8.99, depending on size, and NuHu will serve beer and wine. The average check is expected to be about $10, which is about $3 to $4 less than its casual-dining sister brand.

HuHot, based in Missoula, Mont., has 56 full-service locations nationwide. Restaurants are typically about 5,000 square feet to 5,500 square feet. About 80 percent of those units are franchised.

If NuHu is successful, it will likely be added to the franchise portfolio, Martin said. NuHu’s smaller, 2,000-square-foot size would open more real estate opportunity for the concept.

NuHu is not the first time HuHot has attempted a limited-service concept.

The chain, which Nation’s Restaurant News named a Breakout Brand in 2013, tested a quick-service HuHot Express concept in 2010 in Fort Collins, Colo. But HuHot was already known in that market as a full-service brand, and the company found customers were confused when they discovered the restaurant was limited service.

Key learnings from that first attempt will help get NuHu off to a better start, Martin said.

“We definitely plan to do more,” he said. “But we’re smart enough to know we want to get this off and running and make sure that we’re delivering the quality that’s part of our vision, and that it resonates with the community first.”