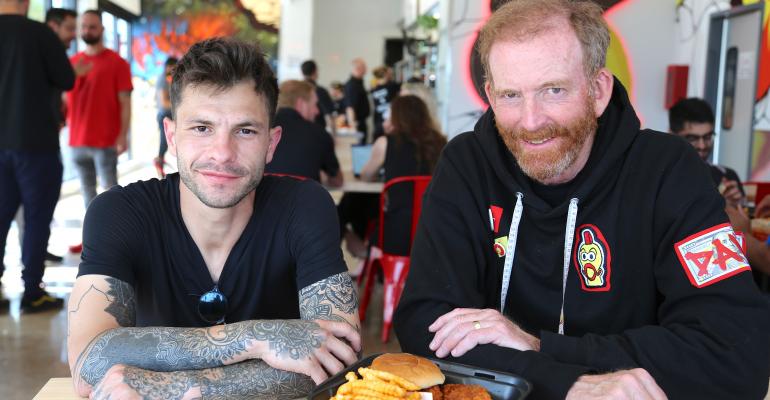 Cofounder Arman Oganesyan, left, and CEO Bill Phelps, right, are planning to grow Dave’s to 75 locations by the end of 2022.
News>Emerging Chains

The Los Angeles-based concept, which as of August had 20 units serving Nashville hot chicken tenders, expects to end the year with 42, said Bill Phelps, Dave’s CEO.

Each restaurant offers the seven levels of spiciness, from no spice to the hottest called “The Reaper,” which requires customers to sign a release-of-claims waiver before digging into their order.

“It's definitely not going to play around,” said concept cofounder Arman Oganesyan, who has sworn off the hottest level after suffering a personal recipe-testing gastrointestinal backlash.

Join us in Denver Oct. 4-6 for CREATE: The Future of Foodservice, to hear from Bill Phelps live.

Dave’s Hot Chicken was opened as a parking lot pop-up in May 2017. Oganesyan and his best friend, chef Dave Kopushyan, along with brothers Tommy and Gary Rubenyan, furnished it with a portable fryer and picnic tables. After blogger and social-media attention, they opened their first brick-and-mortar locations in East Hollywood. Kopushyan is the “Dave” in Dave’s Hot Chicken.

In 2019, the owners struck a deal with Phelps, the cofounder and former CEO of Wetzel’s Pretzels as well as a cofounder of Blaze Pizza, and John Davis, a movie producer, to begin franchising Dave’s.

The fast-casual concept specializes in hot chicken tenders and sliders, along with sides of house-made kale slaw, mac ‘n cheese and French fries. The tenders are fried and coated in an oil-pepper mix, and then more spices are added. A two-tenders combo with fries is $9.99, the two sliders combo with fries is $11.99, and kale slaw and mac ‘n cheese sides are $3.25 each.

Phelps, who recruited celebrity investors to his Blaze Pizza concept, noted that Drake had Dave’s Hot Chicken cater a family gathering when he received the Billboard Music Awards artist of the decade honors in late spring. He added that when basketball star LeBron James invested in Blaze, the brand drew thousands of interested franchisees.

Dave’s opened its first restaurant in the Dallas market in May, a converted Boston Market location that was one of the first units to offer a drive-thru.

“A lot of the fast-casual guys shunned drive-thus,” Phelps said. “So Panera, Chipotle, Shake Shack — they all said no, that it's the fast-food world.”

However, the pandemic accelerated changes in attitudes toward drive-thru convenience.

“They have all changed over the last few years, and certainly since COVID it has been a major change,” Phelps said. “You look at Chipotle: Chipotle will now close a restaurant to open a Chipotlane.”

Many Dave’s Hot Chicken units going forward will offer drive-thru, he said. “I think you're looking at somewhere in the range of about one-third to 40% of our stores will probably be drive-thus over the next couple of years.”

Most of Dave’s open locations (14) are in its home state of California. But the company has expanded to Colorado, Illinois, Nevada, Oregon and Texas, as well as internationally to Toronto, Ontario.

While Phelps said he was set to retire after growing Wetzel’s and Blaze, Dave’s Hot Chicken was exciting.

“My son actually saw the guys in a parking lot” and flagged the concept to his dad, Phelps recalls. “It was something that was insane, and something that we could get really, really excited about. We put together a team and here we are.”

Phelps noted that Dave’s expects to have more than 75 locations by the end of 2022. “We'll be opening up restaurant every four or five days,” he said.

Marketing will rely on the quality of the food, Oganesyan said. The majority of customers are males 18–30, he added.

The menu will remain simple. “We’re very big fans of In-N-Out,” Oganesyan said. “We love how they've maintained the simple menu that people love so much, and everything is just about the main dish. … We just didn't want to add too much to dilute the menu.”

Phelps said he’s most excited about “creating something that is phenomenal.”

“The food is out of this world,” he said, “and it's going to be a brand that's kind of revered as setting a new standard for quality food in a fast-casual restaurant.”