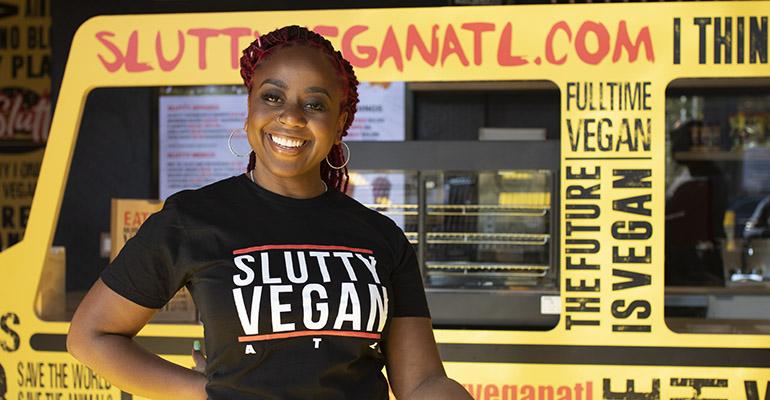 “What I learned working in TV is you have to grab people and meet them where they are. You have to entertain people, give them something to talk about,” said Cole about the decision to give her brand a provocative moniker.

The vegan comfort food menu follows in that pattern, as many of the most popular menu items have risqué names, like the Menage a Trois and the Sloppy Toppy. But nothing about the concept is sexual.

“It's just a driver to clue you in and to get you excited about the brand and make you ask questions, even if it evokes a feeling that makes you upset, frustrated, confused,” said Cole. “Now I can properly explain it to you, and that's how I get people to like [the food].”

And what better place to test that than the South?

Cole is part of a new generation of restaurant leaders who are vocal about societal changes.

“If I did this for money, I would never have spoken up for a lot of the things that have happened in the last year, but I did this because, guess what, this is bigger than me,” said Cole of speaking out during the Black Lives Matter protests and becoming involved in the election and voting rights.

Other entrepreneurs will steer toward neutral for fear of isolating guests or capital partners, but Cole has garnered more fans (and press) from being herself and standing up for what she believes in as part of the company platform.

“As a responsible business owner and someone who represents a class of people, it's my responsibility to be socially responsible and to stand up for my people,” said Cole.

“It's bigger than burgers and fries, it is really about revolutionizing a movement and showing people that you can be in whatever industry you're in, and you can protest any way that you can as long as you're making change,” said Cole.

“I wanted one to bridge the generational wealth gap and to show people that you can be the girl from East Baltimore with roots from Jamaica and be everything that you want to be,” she said. “You can really stand for what you believe in, and not be afraid of the backlash that people are going to give you.”