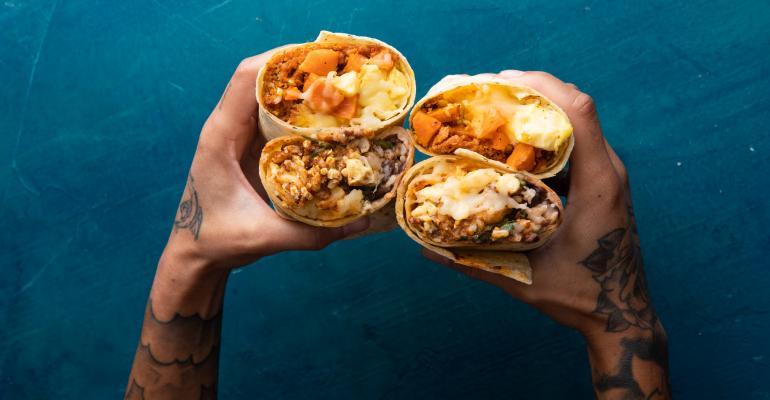 Everytable: Providing fresh food and entrepreneurship for the underserved

In 2015, long before the pandemic forced the restaurant world to do without dine-in service, Everytable launched as a new kind of restaurant concept with a social justice mission.

It began as a brick-and-mortar store offering a menu of healthful, fresh grab-and-go food. Served by a central commissary kitchen, the stores offered dishes like Thai basil noodles with veggies or a salmon superfood salad, for example, that might be priced at $5 in a lower-income neighborhood but at $7 in a higher-income area.

In addition to the 11 stores, Everytable offers delivery — with drivers in house — as well as a subscription program with a similar sliding scale. Diners, for example, can order six meals for delivery each week. That service was expanded to San Diego this year, where Polk hopes to begin opening grab-and-go store locations soon.

In addition, the greater Los Angeles area is dotted with Everytable Smart Fridges — stocked out of the commissary — that dispense healthful meals in the style of vending machines. Users pay through an app.

The company is also growing an institutional foodservice business, which during the pandemic delivered meals to low-income seniors, for example, and feeds the homeless who are temporarily sheltered in hotels.

So when the pandemic came along, Everytable was already well positioned to operate without dine-in service.

“During coronavirus, our grab-and-go stores were heavily impacted, but our e-commerce business really took off, as did our foodservice business,” said Polk. “I sometimes think of it as water flowing to where the need is. Sometimes people are at home, and we can send trucks there. Sometimes people are stopping by our stores, and we can fill up our stores. And sometimes they’re in the office — or hopefully they will be at some point in the future.”

And when the world mourned the death of George Floyd last year and raised a cry for social justice, Everytable was ready for that, too.

Early in 2020, Everytable launched a franchising program designed to tap entrepreneurs of color to operate in underserved communities. The company offers access to capital and a robust training and support program called Everytable University that includes every aspect of running a business. Franchisees also earn a salary — $40,000 for the first three years of “white knuckling,” Polk said.

Franchising in the U.S. is designed for “people who have been able to accumulate wealth or access to capital, and that ends up being people that have benefitted from historical circumstance a lot,” said Polk. It’s not uncommon in traditional restaurant franchising to require potential franchisees to have a net worth of $2 million and $600,000 in liquid assets, for example, putting it out of reach for most people.

Everytable has raised $5 million — which Polk hopes to turn into $25 million through a leveraged loan — that will allow the chain to help build out stores for “dozens, if not hundreds, of entrepreneurs who otherwise wouldn’t have access to that capital.”

Ten franchisees are in the program now, and Everytable is planning to open 20–25 more store locations, mostly franchised, over the next five months.

Now Polk has sights on opening in New York City. He hopes to close soon on a commissary kitchen there that will open this year or in early 2022.

“The whole point of Everytable is trying to solve this issue, which is why a burger and fries at McDonald’s costs $6 and a salad from Sweetgreen or Dig costs $15,” Polk said. “And for us the answer to that is that if you centralize the production of those meals and drive that huge efficiency, then you can keep costs low. But in order to do that, you have to not only do the food production, but also the logistics and the selling as well. So we were fortunate that we had developed this great food production, but also the network of logistics.”