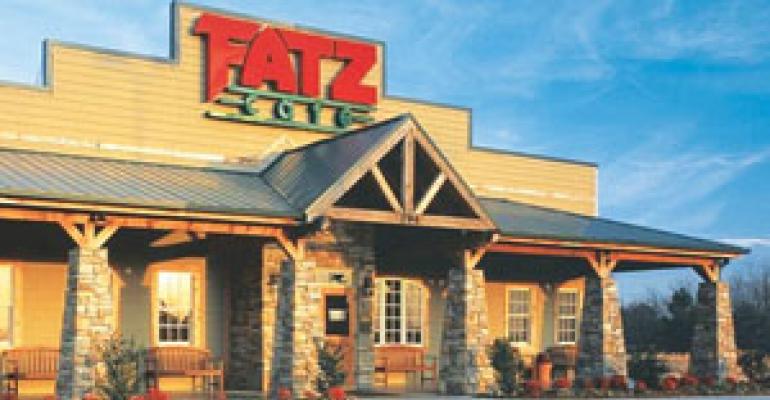 Although the slowed economy has many operators shuttering units, a handful of Southeastern chains are bucking that trend and taking advantage of the depressed market’s cheaper labor and real estate.

“The biggest thing we fight is consumer confidence, not our ability to perform or execute or grow,” said Richie Cannon, vice president of operations for Fatz Cafe, a 45-unit casual-dining chain based in Taylors, S.C.

Founded in 1988, Fatz Cafe has opened seven restaurants this year and plans to open one more in November. The company also expects to open 10 units in 2009. All units are company-owned and run by operating partners who invest a percentage of sales to participate in profits.

Fatz Cafes are open for lunch and dinner and serve alcohol. The average check is $12.50. The concept has two prototypes, one that seats 212 and another that seats 168. Units are located in Georgia, the Carolinas, Tennessee and Virginia. The company plans to grow units contiguously throughout the Southeast, Cannon said, noting that the chain is projected to double in size in five years.

To position itself for that growth, Fatz this summer completed a $40 million recapitalization to refinance its debt and fund expansion. The financing consisted of a $35 million term loan to refinance debt and a $5 million revolver to build new units.

Although the company does not offer coupons or discounts, sales at new Fatz units are up 20 percent, while comps are down 1 percent, Cannon said.

He noted that commodity prices are up about 7.5 percent compared with last year, but that food costs are in line with the prior year because the purchasing staff has locked in many contracts.

“Sure, we feel the concerns of the economy, but this is a great time to make opportunities,” Cannon said, “and while we haven’t seen real estate prices drop, they are finally leveling off. This is truly a great time to be driving guests into stores, and we plan to continue to do so.”

A few growth-minded operators are focusing on some of the region’s most depressed areas. Although South Florida has one of the highest rates of home foreclosures in the country, Orlando, Fla.-based Tijuana Flats plans to focus much of its upcoming growth in that area.

Patrick Fore, director of development for the 65-unit, fast-casual Tex-Mex chain, said it already has three successful stores in that market, so the company has no problem focusing 80 percent of its growth strategy on north Miami-Dade, Broward and Palm Beach counties. The company already has added nine units this year and plans to open four more by year-end, including three in the South Florida area and one in the Tampa, Fla., market.

With an average check of $8 at lunch and $13 at dinner, Tijuana Flats has a strong value perception, Fore said. The company began the year with “a bang,” said Fore, who noted sales were up 6 percent to 7 percent, although they have been down most of the rest of the year.

“The evidence of value and perceived value is whether you are breaking even or down in sales today,” he said. “We are breakeven. We don’t scrimp, we aren’t adding costs and we are not cutting the free sauces. We put people first.”

Of Tijuana Flats’ 65 units, 39 are company-owned. In the past year, the company decided to cease franchising and focus on company-owned units, although existing franchisees continue to open units. Nearly 70 percent of the company’s growth is funded by cash flow, but Tijuana Flats also has bank funding and outside investors.

“We are comfortable growing at a rate where we don’t have to be 800 units strong,” Fore said. “We only want quality locations. We are seeing landlords way more willing to work with us than before.”

The typical Tijuana Flats seats 65 to 70 people, with some additional seating outside.

Charlotte, N.C.-based Brixx Wood-Fired Pizza also is opening restaurants despite the economic slowdown. The company, founded in 1998, now has 12 units, two of which are franchised.

Brixx officials plan to grow their 3,500-square-foot units contiguously between the Atlanta and Washington, D.C., markets. The goal is to have 40 restaurants in five years. Parent company New South Pizza Inc. is opening several new company-owned stores this year and is funding that growth with cash and a line of credit with BB&T.

Brixx, whose average unit volume is $2.1 million, has signed seven franchise agreements this year and has three more pending, Newcomb said. Several franchisees are selecting sites right now, and Newcomb said that none are having trouble getting credit because of their personal financial strength.

Brixx’s comparable-store sales are up 7 percent to 8 percent this year, Newcomb said. The average check of $10 for lunch and $14 for dinner has stayed about the same, he added.

The units seat about 120 people inside and 50 outside, and while Brixx sells wine and liquor, Newcomb said the craft-brewed beer is the real draw for patrons.

“We’ve only raised prices on a few items, but no major increases across the board,” he said. Newcomb said customer counts are up, and food costs have stayed at about 22.5 percent for the last three to four years, making the company “very profitable.”

Brixx has a corporate chef who has been working to control its cost of goods through stringent portion controls and sourcing locally produced goods. When dairy prices shot up last year, the company began making its own fresh mozzarella, he noted.

Newer companies also are vying for growth. Richard and Bob Stoll founded Cheeseburger Bobby’s outside of Atlanta in 2007. The brothers said they plan to open 50 of the fast-casual gourmet-burger units in the next three years through a combination of corporate stores and franchised units.

The founders, who recently sold their 35-unit Stevi B’s pizza buffet concept to a private-equity group, are in the process of opening their second company-owned unit, while several franchises are in the works for opening in Greater Atlanta within the next few months.

Robert Stoll said the growth is coming from a combination of self-funding and SBA loans, which are now “a little harder to come by.”

“We are finding that with the SBA loans that they are a littler stricter than they have been in the past,” he said. “They used to ask for 10 percent down and now are asking for 20 percent down on projects.”

He also thinks the poor economic environment is actually leading to more interest in his “build your own burger” concept, which has an average check of $8.50.

“We feel people want to be in charge of their financial destiny, so as the corporate guys are downsized or laid off, they look to be in their own business,” Robert Stoll said.

The biggest challenge the company faces is commodity pricing, he said. The silver lining is the available real estate, the number of builders and architects looking to bid on constructing units and the volume of people looking for jobs. The typical Cheeseburger Bobby’s ranges from 1,800 to 2,600 square feet and seats 48 to 68 customers.

“In a selfish way, it is a good time to be a franchisor as there is an abundance of talent bidding on projects, and, when we run ads for management for or area directors, we are flooded,” he said.