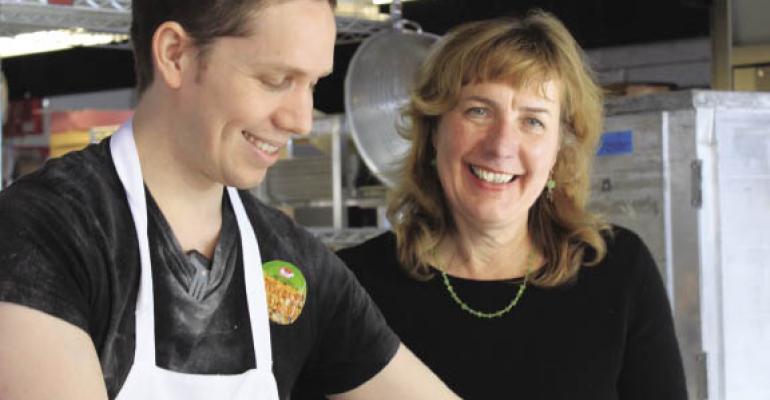 But being presented with two opportunities from developer Vulcan Real Estate, potentially acquiring Amazon.com as a neighbor and needing a larger bakery sparked the ambitious expansion, which will take Tom Douglas Restaurants, or TDR, from six to 11 operations.

In February, Douglas, one of Seattle’s best-known chefs and the operator of the highly rated Dahlia Lounge, opened two new restaurants — a 66-seat pizzeria, Serious Pie, and the 30-seat Biscuit Bar — and the Dahlia Workshop bakery, all in one building.

Another downtown Seattle building located just a block away is set to open more concepts from TDR in late March, including Cuoco, which offers Italian food; the Brave Horse Tavern; and Ting Momo, a 25-seat Tibetan dumpling house.

“We never had a sit-down discussion about opening five new restaurants,” said TDR’s chief executive Pamela Hinckley. “It was more of a confluence of the business opportunities available because of the real estate.”

“And it didn’t hurt that we’ll have 10,000 Amazonians in one spot,” added Douglas, who has been courted by developers nationwide for years. Vulcan Real Estate, which is building a new home for Amazon.com, wanted a flagship restaurant tenant for what is being called the largest urban campus in the nation.

“We’re capitalizing on dining trends that we’re fans of, offering smaller, more specialty spots,” Hinckley said. “We knew we didn’t want to open one restaurant in 24,000 square feet, so we had to figure out what [we wanted] to do.”

Additional restaurants would overtax the Dahlia Bakery, which supplies breads, pastries and desserts to TDR restaurants and retail and wholesale customers. So a new bakery was needed.

“Because we have a mezzanine for the second floor [that is] open to the bakery, we knew we had to be careful about what we put up there,” Hinckley said. “Serious Pie was related to the dough and the bakers below. ... People can smell the fermentation of the dough and the bread cooking. It was a darn good fit.”

“We did some research on the new Amazon employees — they are 21 to 50, and 20 percent are from eastern Asia,” he said. “And they need a place to hang out after work.”

The 120-seat Brave Horse shares the second floor with Ting Momo and features what Douglas said may be the nation’s first wood-fired pretzel oven.

“We’ve had a Tibetan chef [Deyki Thonden] for 10 years, and I’ve always wanted to open something with her,” Douglas said.

Thonden will make pot stickers and dumplings at a raised kitchen station as customers watch. Meanwhile, at Cuoco, Martha Francis will make pasta on a similar station.

“Martha has been making pasta for us for 15 years,” Douglas said. “She rolls the pasta rather than using an extruder. You see the spectacular effort that goes into it.”

Douglas said a big reason he is comfortable opening five restaurants in two months is Hinckley, who joined TDR two years ago. He said she brings internal structure, controls and organization to the 22-year-old company, which Douglas found was getting harder to run as it grew past 500 employees.

“The end of March signifies a big time for our company,” Douglas said. “We’ll have 11 restaurants, and that puts us at the next crossroads: Where do we go from here?”