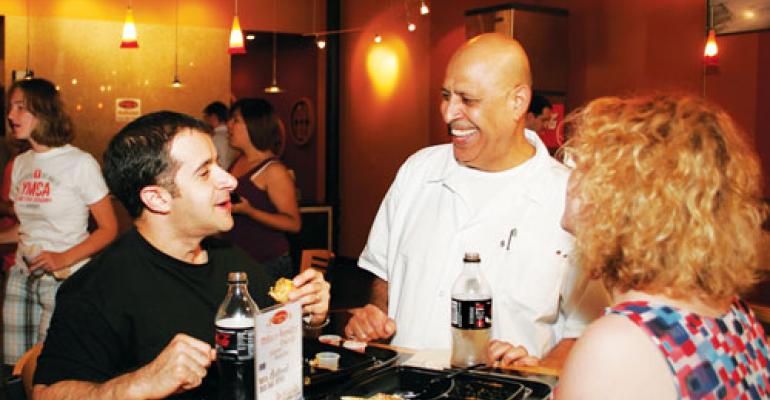 Puniani said he expected the first few franchise agreements to be finalized in the next few weeks and projected five to 10 pacts signed in 2010 with 30 to 40 to follow next year.

Puniani put a conservative growth estimate for the company at around 120 units over the next five years, and he acknowledged that introducing more people to Indian food would be a key factor in Chutney Joe’s growth.

“We’ll keep sending the message [to consumers] that Indian food is good for you, and don’t let the spices scare you off,” Puniani said. “They add flavor, and they’re not going to bite your tongue off.”

Chutney Joe’s opened on South State Street in Chicago in February 2009 and has been featured as a startup to watch in BusinessWeek and the Associated Press. Its average check runs just shy of $10.

There aren’t many quick-service or fast-casual Indian brands out there to compete with Chutney Joe’s, which clears the way for growth but doesn’t do much to educate consumers about Indian cuisine, Puniani said.

“Our food is an ethnic food and it’s up and coming, and yet that’s what remains a bit of a challenge,” he said. “Our focus will be to make Indian food more and more popular and more available to average Joes, even in small and midsize towns.”

Chutney Joe’s has developed turnkey systems for cooking, marketing, real estate selection and training, Puniani said. Store designs could range between 1,500 to 2,000 square feet in standalone units or 700 square feet in food courts and could accommodate different market essentials like delivery or drive-thrus.

“We’ve always believed that our concept is a good urban concept,” Puniani said, but gauging the interest of Chutney Joe’s customers and doing other market research led the restaurant’s team to believe that the brand could travel to dozens of markets.

“Bobby Flay is teaching people how to cook chicken tikka masala, and Walmart is carrying Indian naan bread in Valparaiso, Indiana,” he said. “There are truck stops opening up with Indian food. We’ve found that we could go into a town of 40,000 people with educated, white-collar populations, and they’ll be informed about Indian food and India itself.”

In its first phase of growth, Chutney Joe’s will enter into development agreements in the Midwest, primarily in Illinois, Missouri, Indiana, Wisconsin and Michigan. Down the road, the brand most likely would open a cluster of stores in New York City and New Jersey, Puniani said.

“We just want to have a controlled and sustained growth, so that we can support our franchisees in a very professional manner rather than opening up everywhere,” he said.

Puniani said potential franchisees would have to have more liquid capital and restaurant experience to get funding in a tight credit market, but he added that Chutney Joe’s could be attract pent-up money from sidelined investors.

“We have to be very selective in qualifying our prospective franchisees,” he said, “but the flip side to that is, with the stock market and real estate market not doing well, where will people invest their money? They’re looking for solid investments.”

“Indian is still a largely unfamiliar food to many in the U.S., but many times consumers just haven’t tried it yet,” Paul said. “Many consumers find out about ethnic foods in the appetizer section at another restaurant — some first learned about Mexican food by seeing quesadillas. But if consumers aren’t familiar, the veto vote could become significant, so to me it’s a food that needs to be sampled more.

“In general, Indian is an up and coming food, but that’s been true for a number of years,” Paul continued. “So could it have as many units as Pei Wei? Who knows? But it does lend itself to franchising. There are good opportunities in niche areas.”

Growing slowly but surely is the right way to go for a concept like Chutney Joe’s to go, Paul said.

“You can only push these things so fast so far, particularly with [food with] less universal appeal,” he said. “When you get into narrow niches, you need to be really careful, particularly in site selection and what you pay for rent.”