Waffle House, Inc. is a family-dining restaurant chain specializing in breakfast with nearly 2,000 locations, most of which are located in the Southern region of the United States. The Norcross, Ga.-based chain’s locations are all open 24 hours a day and serve waffles, along with other breakfast staples, in a classic diner-like atmosphere with jukeboxes in nearly every location.

Waffle House was founded in 1955 in Georgia by Joe Rogers Sr. and Tom Forkner, with the idea of combining the speed of a fast-food restaurant with the service of a table service restaurant that would be open around the clock. In 2017, both of Waffle House’s founders died within months of each other.

Waffle House is known for its candlelit dinners on Valentine’s Day, which started in one location in 2008 and quickly grew. The chain is also notorious for its reputation as the site of violent crimes throughout the country. Waffle House has also been associated with conservative politics, though in 2019 the company touted its diversity and LGBTQ protections policies.

Waffle House struggled fiscally in the first half of 2020 before it could adjust its business model to keep up with COVID-19 dining room closures. 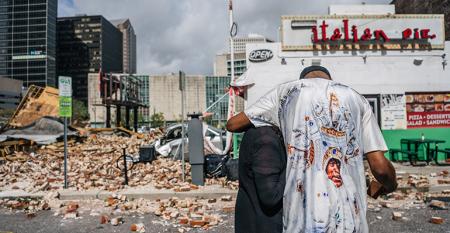 Restaurants face long recovery from Irma
Sep 12, 2017
While storm wasn’t as bad as feared, its impact will still be felt far and wide