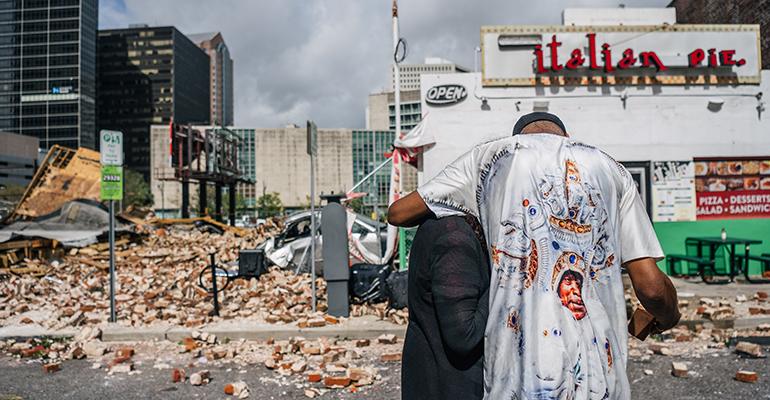 Brandon Bell / Staff / Getty Images News
The few restaurants that could open reportedly did a brisk business, with many residents looking for comfort food as they dealt with assessing damage and the prospect of extended power outages.
News

Restaurants across Louisiana were without power — and in some cases without running water — on Monday following Hurricane Ida, which tore up the southeastern region of the state on the 16th anniversary of Hurricane Katrina.

The category four storm ripped out trees, flooded roadways, destroyed roofs and pulled down power lines. At least one death was reported from a fallen tree. As it moved toward Mississippi, Ida was downgraded to a tropical storm.

Many Louisiana residents had evacuated, and state and local officials on Monday urged people to wait until roadways could be cleared and the power is restored before returning home. Reports indicated some 900,000 people were without power on Monday.

The few restaurants that could open reportedly did a brisk business, with many residents looking for comfort food as they dealt with assessing damage and the prospect of extended power outages.

Many restaurant operators that could also jumped into action to help feed first responders and those remaining in the area. The New Orleans Culinary and Hospitality Institute, or NOCHI, is hosting chef José Andrés and World Central Kitchen Food Truck, said Wendy Waren, vice president of communications for the Louisiana Restaurant Association.

For those who want to help, NOCHI is collecting donations and looking for volunteers.

The restaurant Mopho in New Orleans mid-city neighborhood, emptied its perishable inventory to help feed those in need, Waren said, and New York Pizza location in New Orleans offered free pizzas to first responders until the dough ran out.

Many restaurants and bars were boarded up on Saturday, preparing for the storm’s arrival and to allow staff members to evacuate before the storm hit.

San Diego-based Jack in the Box Inc. said 16 restaurants in Louisiana closed temporarily over the weekend as the storm passed through the area. “Our thoughts are with our Jack in the Box family in the storm’s path,” said CEO Darin Harris in a statement. “We continue to closely monitor the situation and are in consistant communications with our teams.”

In perhaps the most relevant indicator of the storm’s power, the Atlanta-based Waffle House chain said 90 restaurants in the storm’s path were closed through the weekend. Closures for the restaurant chain are so rare, the “Waffle House Index” is often cited as an unofficial barometer for the severity of disasters.

“We are working diligently to reopen restaurants as quickly as possible with currently about 30 still closed, however that is changing hourly,” spokesperson Kelly Thrasher-Bruner said early Tuesday.