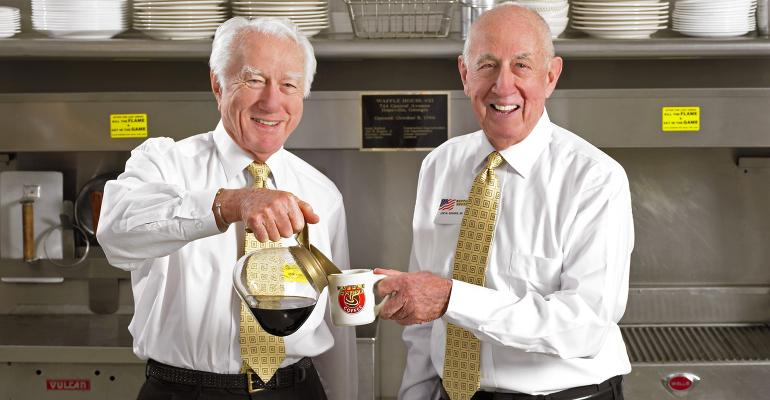 Thomas F. Forkner, who co-founded the Waffle House chain more than 60 years ago, died on April 26, in Johns Creek, Ga. He was 98 years old.

Forkner died less than two months after the death of his business partner, Waffle House co-founder Joe Rogers Sr. Forkner’s cause of death was not disclosed. Rogers died on March 3, at the age of 97. Forkner’s wife of 71 years, Martha, died on March 4.

Forkner and Rogers opened the first Waffle House restaurant on Labor Day, in 1955, in the Atlanta suburb of Avondale Estates.

“Tom will be remembered as a man of honesty and integrity,” said Joe Rogers Jr. in a statement released by Norcross, Ga.-based Waffle House. “He and my father never envisioned the company would grow into what it is today, nor how thousands of associates would be positively impacted by the opening of that first restaurant.” Forkner grew up in DeKalb County, Ga., near Atlanta, and sold real estate after serving as an Army intelligence officer during World War II. Forkner sold a home to Rogers, a neighbor at the time, who persuaded Forkner to join him in starting a restaurant.

Waffle House quoted Forkner as saying: “Joe told me to open a restaurant, and he’d show me how to run it.”

They opened a second location two years later and continued to build the business over two decades. Rogers joined Forkner full-time at Waffle House in 1961.

“Tom and my father had a handshake deal, and their partnership and friendship continued for more than 60 years,” Waffle House chairman Joe Rogers Jr. said. “Tom and Joe were great partners — Tom working the real estate side of the business and my father operating the restaurants.”

When they sold the company in the late 1970s, it had more than 400 restaurants.

Although he was out of the day-to-day business, Forkner regularly visited Waffle House’s corporate office, including trips just weeks before his death, the company said.

“Tom would drive himself to the office to have lunch with new manager trainees,” Rogers Jr. said. “He would chat with them about how the company began and offer encouragement to them as they started their careers.”

Forkner is survived by his children Marti Forkner-Vernon, Allison Forkner, and Tom Forkner Jr., as well as five grandchildren and four great-grandchildren.

The company said donations may be made to The Giving Kitchen, which helps Atlanta-area restaurant workers, the Georgia Junior Golf Association or the National Multiple Sclerosis Society.