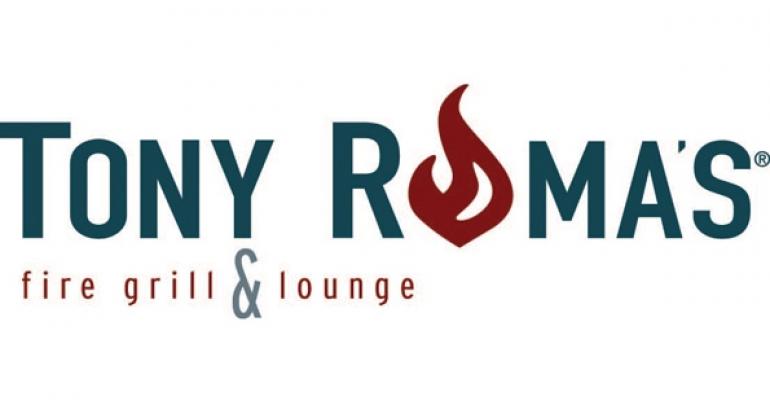 “It’s just in the Florida stores that the company owns for now,” Myres said of the rebrand.

A new restaurant scheduled to open in Winter Park, Fla., in the fall will also be designed as a Fire Grill & Lounge, he said. The branding includes an open kitchen, eight-seat chef’s table and energy-conserving lighting. The menu features local produce, craft beers and cocktails.

Myres spoke with Nation’s Restaurant News after returning from Singapore, where the 150-unit casual-dining chain has just opened a new location.

Tony Roma’s just opened new units in Singapore and Brooklyn, N.Y. What differences do you see in the U.S. and international markets for casual dining?

The international restaurants, we’ve continued to open those with very, very good success. The domestic ones, the casual-dining segment in the U.S. just has not seen growth and seen shrinkage. We were very pleased to open that Brooklyn restaurant. The guys in New York are going to open another one in Long Island. We’ll probably open five to six new domestic Tony Roma’s within the next 18 to 24 months. That’s something that hasn’t happened in a while, so we’re optimistic on that.

And the new prototype?

We opened the Tony Roma’s Fire Grill & Lounge. Our board about two years ago said we needed to look proactively at what the next generation of Tony Roma’s should be. We started to look at the competition and looking at what was cool. We started to look at what we were doing well and what we weren’t. Everyone knew us for ribs, of course, but we’re also finding customers were looking for the gastropub, the share-ables.

How did the company approach the new unit?

We came up with an acronym called Project R.I.B.S. The “R” was refresh the brand, everything from the food and décor to the building. The “I” was in improve the guest experience, not just from a casual-dining standpoint but do something that really stands out. The “B” was “build the brand” through marketing awareness. And “S” was “sustain the growth,” keep the international going as well.

Will the new prototype spread to the franchisees?

We said we need to do it ourselves first before we can release it to the franchisees. Too many times I think people say, “Go ahead and spend your money, but we’re not going to spend our money testing it out and seeing if it works.”

How do you view this grill prototype?

We think this is the next-generation Tony Roma’s. It really turned out cool.

How does the rebranded restaurant compare in size to traditional Tony Roma’s units?

It’s the same square footage, right at about 5,500 square feet. We did add a patio. The outside is expanded. We have 15 seats on the patio and there are about 165 seats on the inside.

Those were really dramatic. We have the favorites, like the legendary ribs and our Kickin’ Shrimp. The Filet Medallions, which we researched with a supplier out of Chicago, stayed as well. But there are snacks and shareable items as well. We came up with naan [Indian flatbread]. One spectacular addition is that we make smoked prime rib on Friday, Saturday and Sunday. It melts in your mouth.

How about the beverage program?

What’s really been dramatic is the impact on the bar. Tony Roma’s has always had a really low bar mix. We probably run about 10 percent bar mix. We’ve added domestic craft beers. We’ve tried to specialize, including Florida craft beers. We’ve changed the ice even. We use that in handcrafted cocktails.

You’ve also added an open kitchen. What’s the thinking there?

That’s one of the things people like to see today. One of the groups that we really wanted to go after is the 30- to 49-year-old demographic. They are foodies. They watch the Food Network. They are knowledgeable about sourcing. We try to do some local sourcing on vegetables. We even have a chef’s table now where you can see the activity in the kitchen.

What are the plans for this concept?

We’ve signed a lease to do a brand-new company Tony Roma’s in the Winter Park area of Orlando. It will open in the fall of 2014. We’ll be able to design the open kitchen there from the beginning.

And when will this be available to franchise groups?

We’re compiling the data. Hopefully by October we’ll have enough data that it will be compelling to them.

How about for your partners abroad?

The competitive set is much more heated domestically than it is internationally. We’ve seen the need to make these changes first domestically, and we don’t have plans to change the international for some time.