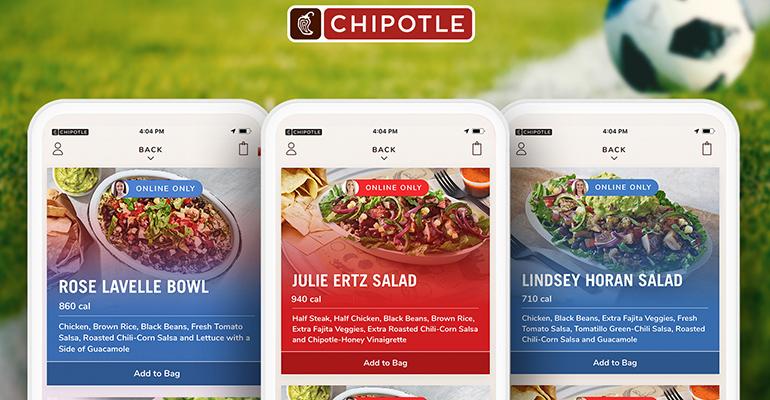 The latest buzzwords in the competitive third-party delivery space are “native delivery,” a solution for restaurants to keep valuable consumer data while avoiding hefty third-party commissions.

Native delivery allows consumers to order delivery through the brand’s own digital platforms.

The solution, which involves stitching together ordering and app development platforms such as Olo and LevelUp, is being adopted by both large and small regional brands including Newport Beach, Calif.-based Chipotle Mexican Grill Inc., Denver-based Modern Market Eatery and New York City-based Dos Toros.

Modern Market recently began offering native delivery through its app and website, which also includes group ordering. While third-party delivery is a meaningful percentage of sales at the fast-casual chain’s 30 restaurants, co-founder Anthony Piglicampo said he became frustrated with not having the ability to review customer data.

By offering native delivery, he said guests can earn loyalty rewards -- something that can’t be done with third-party apps.  Modern Eatery contracts with various third-party delivery companies such as DoorDash to make deliveries. Since orders aren’t placed in third-party marketplaces, the fees are much lower.

Dos Toros, which has 21 locations in Chicago and New York City, began offering direct delivery in the spring. Co-founder Leo Kremer said the online program offers customers an experience that is consistent with the in-store experience. It also personalizes the experience by offering menu recommendations and targeted promotions to consumers – an artificial intelligence solution provided by GoParrot.

"We were determined to create an online delivery program that offers the exclusive, high-touch, in-store experience consumers have each time they walk through our door," Kremer said in a statement.

Chipotle, which began direct delivery last year, has been strategic about its native delivery programming. Orders made through the brand’s website or app have more customization options for diners. The brand also consistently offers online-only menu specials through its branded digital platforms.

For example, the company’s lifestyle bowls, introduced in January, are online-only meals available for delivery or pickup. This month, the company began offering the favorite orders of soccer stars Julie Ertz, Lindsey Horan and Rose Lavelle. The meals, two custom salads and a bowl, can be ordered only through Chipotle’s app or website through July 9.

Modern Market, which recently merged with Los Angeles-based Lemonade, said off-premise transactions account for more than 50% of sales.  Piglicampo said delivery sales are generally incremental for the chain, which serves salads, sandwiches, soups and plated meals made with sustainable proteins.

“Delivery, at the end of the day, is the new drive thru,” Piglicampo said. “That’s how you have to think about it” 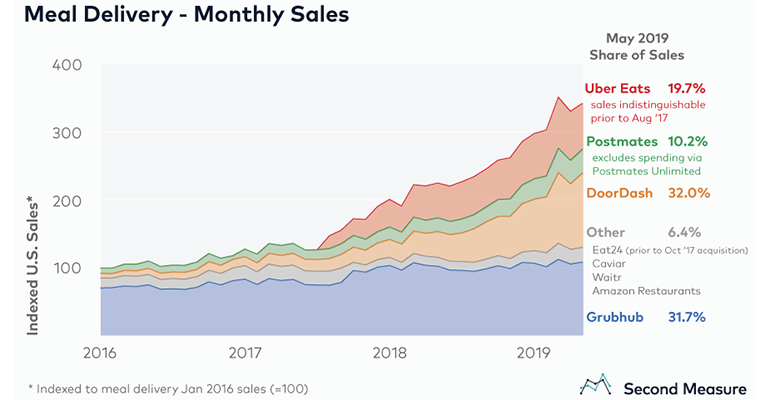 Second Measure, a firm that analyzes U.S. consumer spending, recently released its latest sales findings among the largest third-party delivery operators. In May, DoorDash logged a 189% year-over-year jump in sales, compared to 32% at Uber Eats and 6% at Grubhub.

“No other meal delivery service comes close to DoorDash’s growth, but nearly all of them are growing,” Second Measure said. “In May, sales for the industry as a whole rose 52% year-over-year, as more Americans realize how much they like eating restaurant meals at home.”

DoorDash’s share of sales edged out Grubhub in May. DoorDash had a 32% share of sales, while Grubhub and its subsidiaries, which include Seamless and Eat24, had a 31.7% share.

Ranking in third in the Second Measure monthly sales report was Uber Eats, which logged a 19.7% share of sales for May. Uber, the parent company of Uber Eats, has been innovating like crazy lately. It is testing meal drops by drone in San Diego and Uber Vouchers.  The latter is a partnership with restaurants like TGI Fridays to offer ride-share customers a voucher that pays or partially pays the tab for their ride to a restaurant. 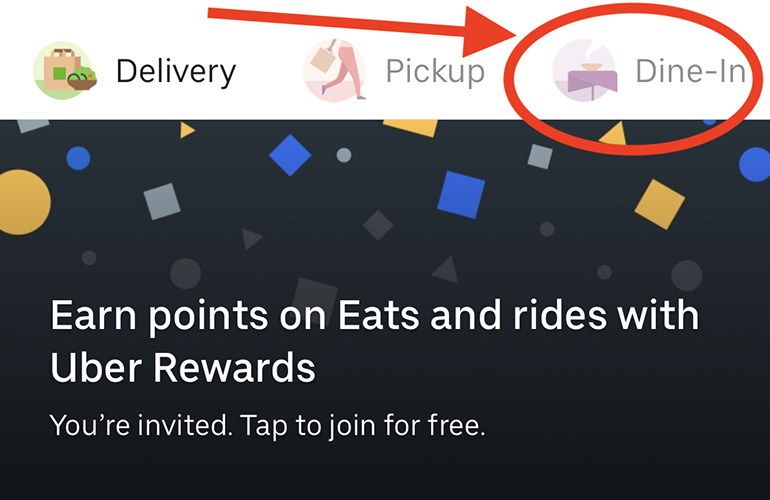 The company recently confirmed it has been quietly testing a dine in option in Austin, Texas, Dallas, Phoenix and San Diego.

Uber Eats has offered few details about the test, which has been ongoing since late last year. It has no plans to expand the pilot, which works like Allset, an app that provides order- and pay-ahead technology for restaurants – particularly full-service brands.

“We’re always thinking about new ways to enhance the Eats experience,” the company said in a statement.