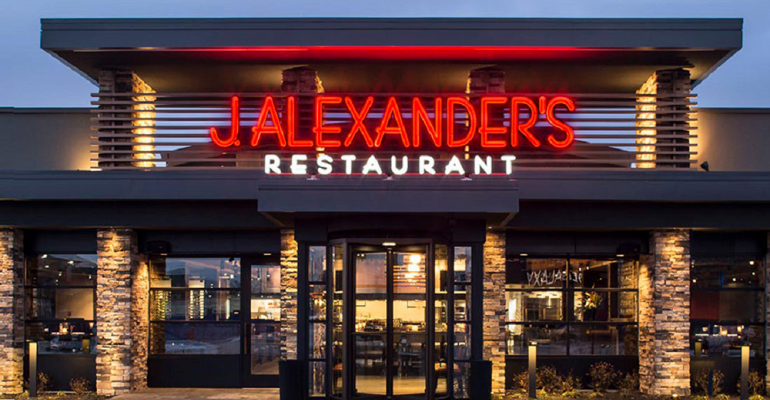 J. Alexander’s had been approved for $15.1 million in loans.
News>Casual Dining

Joining a growing number of restaurant chains that have pledged to repay Paycheck Protection Program (PPP) loans, J. Alexander’s Holdings Inc. on Friday said it intends to return the $15.1 million it would have borrowed under the program.

In a filing, the company said the move was a result of new guidance issued by the Treasury Department. On Thursday, the Treasury department said public companies with substantial market value and access to capital will need to make the required “certification in good faith” that the loan is necessary for continued operations.

J. Alexander’s had been approved for $15.1 million in loans under the program, split between J. Alexander’s LLC and Stoney River Management Company LLC. In the filing, the company said it believed its subsidiary operating companies were eligible for the loans in accordance with the special eligibility provisions for larger companies under the CARES Act.

The company’s plan was to use the funding to provide financial assistance to restaurant-level employees, including about 3,400 furloughed hourly employees that are not assisting with the current carry-out programs, “and to restore the company’s workforce as quickly as possible once dine-in operations could be safely resumed in accordance with applicable state and local government guidelines.”

Larger restaurant companies were allowed to apply for PPP loans for any physical location that has fewer than 500 workers. But the larger companies that have received PPP loans have faced a backlash from critics who contend they are taking funding that could benefit smaller businesses with less access to capital.

Several other companies have returned such loans, including Shake Shack, the parent of Ruth’s Chris Steak House, Sweetgreen and Kura Sushi.

It’s not clear whether the Houston-based private company, which operates more than 600 restaurants across the country, had received a PPP loan before the funding ran dry last week. Congress on Thursday approved a bill to replenish funding for the program, adding $310 billion, and the president signed the bill on Friday.

In a brief statement, Landry’s said, “When the Paycheck Protection Program was created, we were advised that the funds would allow us to bring thousands of our valued employees back to work. We have since learned that if our company received these funds, we would prevent smaller companies from receiving aid of their own. For this reason, we have made the decision to deny assistance that would be made available to us through the program.”

Earlier this month, Fertitta was reportedly seeking $250 million from leveraged loan investors to shore up liquidity.