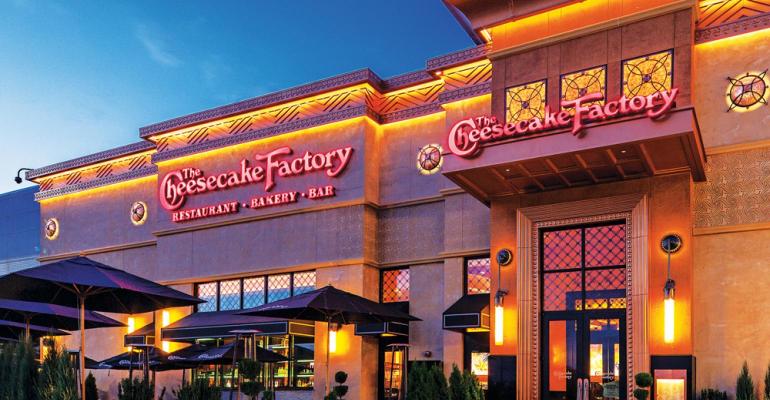 The Cheesecake Factory says it is in negotiations with landlords.
News>Casual Dining

The Cheesecake Factory Inc. is furloughing 41,000 hourly workers, reducing the pay of its executive officers 20% and warning landlords it will not make lease payments for April because of the coronavirus pandemic, the company said in federal filings Friday.

The Calabasas Hills, Calif.-based company, which owns The Cheesecake Factory, Grand Luxe, North Italia and other brands, said in Securities and Exchange Commission filings that the actions were in response to impacts from the COVID-19 closures.

The company had warned some landlords in a March 18 letter that it would be unlikely to make April rent, although it said five days later, on March 23, that a transition to off-premise sales and some restaurant closures were “enabling the company’s restaurants to operate sustainably.”

The company said the executives would reduce their 2020 base salaries 20% effective April 1 and the board members would cut their annual cash retainer fees by 20%.

“In addition, due to the curtailment of our dine-in restaurant operations and landlord closures of certain properties, we have furloughed approximately 41,000 hourly restaurant staff members,” the company said in its filing. “The furloughed staff members will retain their benefits eligibility and insurance until June 1, 2020, and will be provided a daily complimentary meal from their restaurant.”

The company said it was not planning to make lease payments for April.

“We are in various stages of discussions with our landlords regarding ongoing rent obligations, including the potential deferral, abatement and/or restructuring of rent otherwise payable during the period of the COVID-19 related closure,” the company said.

The Cheesecake Factory, founded in 1978, owns and operates 294 restaurants throughout the United States and Canada under brands that include Grand Lux Café, North Italia and a collection within its Fox Restaurant Concepts subsidiary. The company licenses 26 Cheesecake units internationally.