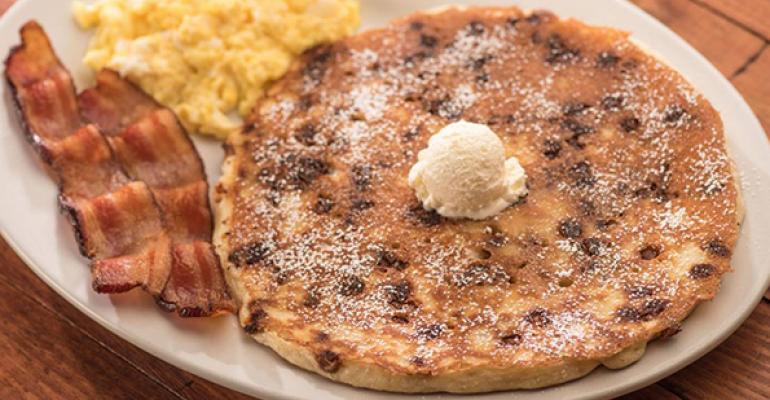 Kids Will Be Foodies

Trends in kids&#39; breakfasts include everything from fresh fruit to yogurt to pancakes. The Breakfast Journal is a Supplement to Nation&rsquo;s Restaurant News and Food Management. Get all of the articles from the November 2016 Breakfast Journal here.

Kids need to eat a nutritious breakfast to help them grow, and the food has to be fun, delicious and in kids’ eyes-- “awesome.” Commercial and noncommercial foodservice operators say the trends in kids’ breakfasts include longtime favorites with a twist, fresh and healthful items, and also new ways to make sure that kids eat breakfast every day.

According to Datassential MenuTrends, most restaurants that have kids’ breakfast entrées offer the typical menu items that kids love. The menu research firm reports that 80 percent of these operators offer eggs, 71 percent offer pancakes and 62 percent feature French toast. Some items are becoming more popular on kids’ breakfast menus. There have been increases in protein-rich items such as omelets, which increased 25 percent in menu mentions over the past year, and yogurt, which increased 13 percent, Datassential says.

Operators say the trends in kids’ breakfast menus reflect the need to appeal to the youngest consumers and their parents.

“At the end of the day, in order to get parents to come in, we have to have something their kids want,” says Shane  Schaibly,  vice president of culinary strategy for Bradenton,  Florida-based First Watch Restaurants, which includes 175 First Watch and 100 The Egg & I restaurants. He says in 2015 kids' meals accounted for more than 5 percent of entrée orders. “It’s a big part of our business and we take that seriously.”

The top selling kids’ breakfast item is the Chocolate Chip Pancake, which is a multigrain pancake with chocolate chips, topped with butter, and served with a choice of bacon or sausage.  Schaibly says the entrée is a big hit because it has both chocolate and healthful grain. First Watch also offers the Fresh Juice Bar, which makes Kale Tonic, which is made with juiced kale, Fuji apple, cucumber and lemon; and Day Glow, which is all-natural, freshly juiced carrots, oranges and lemons with organic ginger juice. “We also see that children love to sample what mom and dad are having,” he says.

Kids do like fruit at breakfast, says Eric Cleveland, executive chef for Shoney’s, which has approximately 155 locations. The chain’s fresh food, all-you-care-to-eat bar features cut up fruit including honeydew melon, watermelon, cantaloupe and grapes. “I see a lot of kids going to the fresh food bar and picking up those fresh fruits with nice fluffy scrambled eggs and toast or biscuit and yogurt,” he says. “They are going towards those natural healthy things. A lot of that is training coming from home.” Nashville, Tennessee-based Shoney’s also offers fresh juices and smoothies, and plans to add healthful items to the menu.

Another big trend is to offer breakfast all day. At Cracker Barrel Old Country Store, which has 640 locations, all-day breakfast has been available since the Lebanon, Tennessee-based brand’s founding in 1969. ”Because we promise our guests a friendly ‘home away from home,’ it only seemed appropriate to please people by serving them what they wanted, when they wanted it,” says senior vice president of marketing Chris Ciavarra.

The No. 1 selling item from the kids’ breakfast menu is fluffy buttermilk pancakes. To reach out to younger guests Cracker Barrel launched “Breakfast Y’All Day” on Snapchat and encourages people to share their all-day breakfast experience.

Datassential also reported in its Keynote Report on Kids’ Menus that half of all restaurants offer kids’ menus. That is for all dayparts, not just breakfast. Milk and juice are commonly on kids’ menus, and healthier varieties are emerging, such as organic milks, smoothies and freshly squeezed juices. Portable and healthy fruit cups have increased on kids’ menus since last year.

Portability is important in noncommercial foodservice too. Offering grab-and-go foods can help increase school breakfast participation, which is low because kids typically eat breakfast at home, says Jennifer Aranas, senior project manager at Datassential. “Schools have to contend with parents weighing the benefit of school breakfast when they have to make sure the child gets to school early enough for breakfast, plus paying for foods that are easy, convenient and affordable to eat at home.”

The solution for many schools is to offer items such as breakfast bars, parfaits, wraps and sliders. “Also worth considering are breakfast beverages, fruit and yogurt smoothies, with protein that kids can quickly and neatly navigate with minimal fuss,” Aranas says.

Roxanne Moore, a registered dietitian and the national wellness director for schools for Sodexo, says other trends include oatmeal with toppings. Also sandwiches are still on-trend at schools, for the convenience of eating breakfast on the go. “The biggest barrier to breakfast is time-- getting them to school on time and settled into class,” Moore says.

Convenience is also important in secondary schools, says Mark Jeffrey, district manager, Sodexo at Providence School District in Rhode Island. In elementary school the schedule is structured and students have a designated time for cafeteria service for breakfast. “When you go to secondary school, there is a lot of competition for that time because kids think, 'Am I going in for breakfast or do I want to stay outside or see my friends,'” he says. “In secondary school we are more successful when we bring breakfast to the students versus having students go to the cafeteria.”

There are benefits to feeding kids in the morning. “Attendance is higher and tardiness is lower,” Jeffrey says. “Breakfast in the classroom changed the entire culture of that school.”