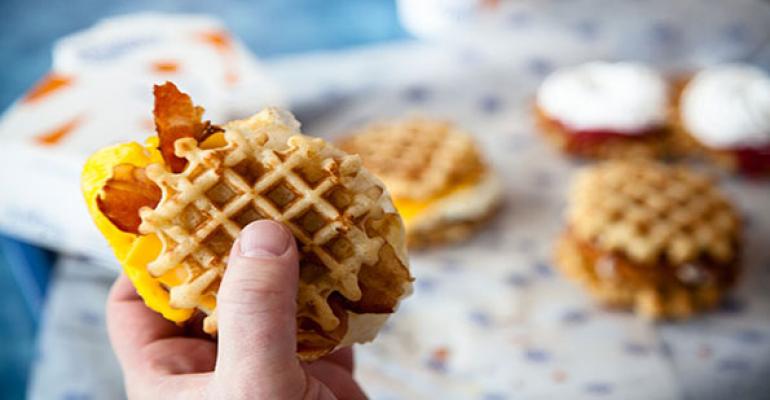 Consumers want to eat breakfast any time, and operators are responding with flexible menus. The Breakfast Journal is a Supplement to Nation&rsquo;s Restaurant News and Food Management. Get all of the articles from the November 2015 Breakfast Journal here.

Pancakes for dinner used to be the realm of shift workers, millennials and eccentrics. Today consumers of all ages and backgrounds want to order breakfast items way past 10:30 a.m. In fact, 72 percent of consumers say they wish restaurants would offer breakfast items throughout the day, according to the National Restaurant Association’s 2015 Restaurant Industry Forecast.

This year McDonald’s announced — reportedly after years of consumer requests — that it would offer breakfast all day. Other brands are making similar announcements. In September Columbus, Ohio-based White Castle began offering “Anything, Anytime,” which means breakfast items such as Belgian Waffle Breakfast Slider, French Toast Sticks and Hashbrown Nibblers are available though out the day.

“We asked customers how they felt about this two years ago,” says Jamie Richardson, White Castle vice president. “They were very positive, so we considered what would it take to do that.”

What it took was new grills, reflecting a significant investment for the 390-unit chain. The grills are larger and make it easier to cook different types of food at the same time, so as not to impede the speed of service.

“We are doing everything on the menu, not just a few top sellers,” Richardson says. “It’s been about the grill space and staying focused, and being prepared.” For example, he says, the larger grills will help the staff prepare a 30-slider Crave Case at the same time someone orders a Sausage & Gravy Waffle Slider.

Some operators made the all-day breakfast decision years ago.

While millennials are famously a group that likes to customize not only their meals but also when to eat, consumers of all ages are not staying within the limits of a traditional meal schedule. “If our guests want to eat a Breakfast Jack for dinner or a Sausage Croissant at 2 a.m., then we say, ‘Go forth and conquer those cravings,’” Alter says. “If our doors are open, that means our entire menu is available.”

It’s not just the quick-service players who are competing in this space. Lebanon, Tenn.-based Cracker Barrel Old Country Store has offered an all-day breakfast menu since the casual-dining chain was founded in 1969.

“Because we promise our guests a friendly home away from home, it only seemed appropriate to please people by serving them what they wanted, when they wanted it,” says Janella Escobar, director of corporate communications. “This differentiator remains one of our guests’ favorite parts of the Cracker Barrel experience."

All-day breakfast is one way to compete in a rapidly changing environment. In June Golden Corral in Raleigh, N.C., launched its Breakfast for Lunch and Dinner promotion, which made Golden Corral’s weekend brunch menu available all day throughout the week. The promotion, supported by TV ads featuring comedian Jeff Foxworthy, was scheduled to run until September, but customer response was so strong the chain extended it until November.

Chartwells is based in Rye Brook, N.Y., and provides dining services to 270 colleges and universities nationwide. Christian Fischer, executive chef and vice president of culinary innovations, says certain breakfast foods such as omelets work well for lunch and dinner. Other foods have been popular, too, such as oatmeal or yogurt parfaits topped with granola. The key is to set up smaller breakfast stations during other times of the day.

“One of our challenges, because we do things fresh, is to have the omelet bar all day,” Fischer says. “We are always looking for other real estate. We have to be very creative.”

At the same time, Fischer says, students want nontraditional foods for breakfast, everything from fish tacos to quinoa. “They are looking at food a lot differently,” he says.

That is true for younger students, too. San Francisco Unified School District launched several programs that enable kids to eat breakfast during nontraditional hours. The district offers Grab ‘n Go breakfast from a mobile cart so students can eat the meal in several places in the school. Second Chance Breakfast allows students to eat breakfast later, during a recess, so that a greater number of schoolchildren can participate in the breakfast program.

The schools also offered Breakfast for Lunch on the first day of the 2014-2015 school year. “School administrators at first thought there had been a mistake with production, that the breakfast items were accidentally being served for lunch,” says Daniella Sawaya, communications and development manager for Student Nutrition Services. “But it was a huge hit with the students.”

All-day breakfast has its challenges, of course. There is an extra labor component, as workers must wrap the pancakes or waffles to keep them warm and tasty. In addition, there has to be creative menu planning to include protein, as traditional breakfasts are heavy on the carbohydrates.

Still, the programs help kids get nourishment during the day. “It also exposes students who maybe don’t eat at all in the mornings to the fact that breakfast can be a delicious and important meal,” Sawaya says. “We have heard from many students that they were at first confused by our yogurt parfaits. They had never thought to mix granola into their yogurt. Now it’s a favorite at lunch and during the Breakfast in the Classroom program.”