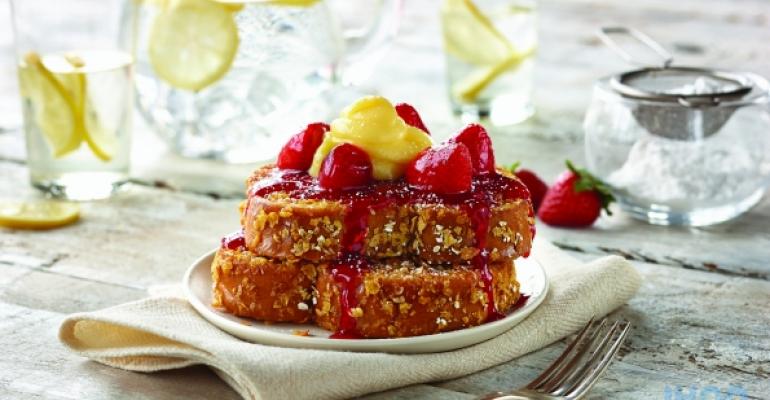 If consumers are eating fewer carbs or avoiding gluten, they might be doing so at meals other than breakfast. Operators say bread is more important than ever, and people are also seeking nontraditional breads with their first meal of the day. The Breakfast Journal is a Supplement to Nation&rsquo;s Restaurant News and Food Management. Get all of the articles from the November 2015 Breakfast Journal here.

If consumers are eating fewer carbs or avoiding gluten, they might be doing so at meals other than breakfast. Operators say bread is more important than ever, and people are also seeking nontraditional breads with their first meal of the day.

According to Datassential MenuTrends 2015, the fastest growing bread term on breakfast menus is brioche toast, which grew 32.9 percent over one year. Also seeing an increase in the number of menu mentions were baguette, which saw 23.4 percent growth, wheat tortilla with 17.2 percent growth, and pretzel with 16.8 percent growth. Longtime favorites were still well represented, as toast appears in 46.8 percent of breakfast menus and white bread appears in 36.4 percent of menus.

Operators say the return to bread is a welcome one.

“As a chef, it’s great to see that bread and bread-based menu items are once again trending very strongly with our consumers after a period where it seemed to take a back seat in the culinary arena,” says Marie Grimm, vice president, menu development and innovation for  IHOP. “For example, we’ve seen a big increase through our testing and our menu offerings in guest receptivity to new types of French Toast. In fact, we just completed a promotional window featuring our Double-Dipped French Toast—which featured our brioche French Toast dipped in a crunchy coating of corn flakes and oatmeal. It was one of our most successful limited time offerings.”

Brioche is especially popular, and the Glendale, Calif.-based IHOP has offered a number of varieties since introducing Brioche French Toast as a limited time offer in 2014. Sweet breads are also gaining. The 1,650-unit IHOP will offer Banana Bread French Toast for the holiday season. “We also have been testing some very exciting offerings that utilize other sweet breads in 2016,” Grimm says.

Other breads are also gaining popularity in French toast. Terrace Café, which has two locations in Charlotte, N.C., offers Pumpkin Bread French Toast for fall. “We try to keep it seasonal,” says Patrick Davis, executive chef. “In summer we did Peach French Toast.”

Davis adds that there is also the opposite trend, which is no bread. At Terrace Café the omelets come with a choice of bread, such as wheat, white or biscuits. “Recently in the past year a lot of people are opting for no bread, either not to consume carbs or they want to go gluten free,” he says. “We don’t have an option for gluten free, so people bring in their own gluten free bread and we toast it up for them, no problem.”

The staff lets diners know that the kitchen is not a gluten-free facility, which means there is no separate cooking equipment for gluten-free items. People generally don’t object, so it is likely that these customers are not individual with celiac, but choose gluten-free as a diet or lifestyle.

Some operators are going all in on bread, instead of trying to lose the gluten. “Gluten free is important for all of us because it has elevated the discussion to a high level,” says Tom Gumpel, vice president of research and development/innovation for Panera Bread. “Pressure on bread in general has helped us to huddle up and say, This is in our name, this is something we have to own.”

There is going to be a bread renaissance, Gumpel says, and it will be led by whole, ancient and sprouted grains. According to Panera’s website, sprouted refers to the point at which the seed just starts to turn into a plant, and sprouted grains are a nutritional powerhouse and easy to digest. About two years ago Panera launched the Sprouted Grain Bagel Flat, which contains sprouted wheat, rye, spelt and oats mixed with whole wheat flour and honey, then topped with oats. In 2014 Panera added a sprouted grain roll as a side bread option.

“Sprouted grains are interesting because it’s only now Americans are starting to get with whole grains,” Gumpel says. “What they think they know about sprouted are green sprouts of grass from the 70s. It’s going to take time, and education. People who purchase these side rolls as well as the bagels are believers.”

Joanne Chang, owner of the four-location Flour Bakery and Café in Boston, says gluten-free and whole grain breads seem to be simultaneously on-trend. “More interesting grains are popping up in the market because guests are interested and curious about food,” she says. “We do whole wheat focaccia and we are getting ready to introduce a multigrain sourdough.”

Meanwhile, people are also asking for gluten free, so Flour Bakery makes loaves with a flour blend that includes milk powder. The challenge, Chang says, is if a customer also wants a dairy-free bread, this item will not work.

Gluten free is still a trend at breakfast, but now artisan bread is catching on, says Spencer Lomax, who is the sourcerer, or head of purchasing, for Denver-based Snooze, an A.M. Eatery.

One popular item is the soft pretzel roll filled with scrambled eggs, cheddar cheese and a sausage patty. This makes sense as a sandwich, he says, because often the base for pretzels is rye. The 13-location Snooze also offers the option of having pumpernickel rye for eggs benedict, instead of an English muffin. There is also the Bella! Bella! Benny, which features prosciutto, Taleggio cheese, and poached eggs on toasted ciabatta, topped with cream cheese hollandaise, balsamic glaze and arugula.

“We really seek out artisan bakers in each of our markets,” Lomax says. “I do think a trend in bread is understanding fresh baked artisan breads and expecting more.”