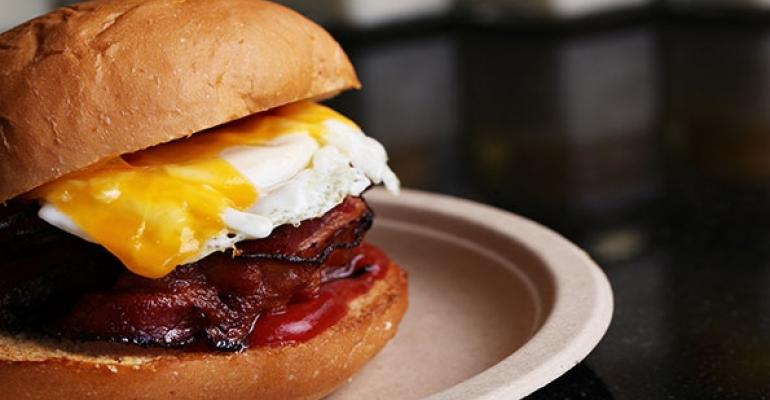 Managing the demand for eggs

The vast popularity and numerous applications of eggs makes them virtually irreplaceable in the kitchen, especially at breakfast. The Breakfast Journal is a Supplement to Nation&rsquo;s Restaurant News and Food Management. Get all of the articles from the November 2015 Breakfast Journal here.

The vast popularity and numerous applications of eggs makes them virtually irreplaceable in the kitchen, especially at breakfast.

That’s why removing them from the menu is hardly an option for commercial and noncommercial operators coping with the effects of the avian influenza outbreak that has roiled the egg industry this year.

Operators are doing whatever it takes to keep eggs as a breakfast staple despite soaring prices and tight supplies of certain egg products. That includes absorbing higher costs, tweaking the menu mix and reformulating breakfast items to get more mileage from egg inventory.

Such measures are in play at Shari’s Café & Pies, a Beaverton, Ore.-based family-dining chain with 96 locations. Its egg prices peaked this spring at 75- percent to 100-percent higher than pre-bird flu levels.

“We looked at ways we could produce a product as good or better than what we currently have [by using] less egg,” says Kevin Bechtel, senior vice president of purchasing and menu development. “In some cases, that meant adding dairy to stretch out the egg and reduce the volume.”

“The guest perception is that it is better than what we had before,” says Bechtel.

Liquid egg is going further as well. “We added some dairy to it, and we reduced our consumption by 25 percent,” Bechtel says.

Shari’s also shelved a planned promotion of cheesecake-filled brioche French toast — “egg on egg on egg,” as Bechtel put it. Currently on offer is the new Country Steak Stacker, a hot country fried steak sandwich topped with one egg.

The crisis struck suddenly in the spring when the H5N2 avian virus, probably spread by wild birds, sickened egg-laying flocks. Farmers were forced to destroy more than 40 million chickens. That sent operators on a white-knuckle ride of spiking prices and spot shortages.

Prices have moderated recently, but until the flock is restored to its normal size, operators should brace themselves for continuing volatility in the egg market, says DeWayne Dove, vice president of supply chain for SpenDifference, a Denver-based purchasing company for restaurants. Today, the flock stands at 271 million head, down from over 300 million before the outbreak.

“It is recovering,” says Dove. “But from everything I hear, that 300 million number will probably not be reached until mid-to-late next year.”

Liquid egg whites has been the priciest and hardest-to-get product. It jumped from 80 cents per pound prior to the virus outbreak to a high of $1.81 in July, before receding to $1.51 per pound in early September, Dove says.

“Obviously, anyone who was thinking of promoting egg whites this summer probably pulled back,” says Ric Scicchitano, executive vice president, food and supply chain, of Corner Bakery Café, a fast-casual chain based in Dallas with 195 locations.

Corner Bakery allows guests to substitute egg whites for whole eggs in any of its egg dishes. As a high-protein, zero-cholesterol food, egg whites have “almost a cult following” among health-and-fitness-minded patrons, Scicchitano says.

“If guests come into the restaurant after a workout and they can’t have egg whites, they will let you know about it,” Scicchitano says.

At Michigan State University in East Lansing, Mich., the Culinary Services staff is separating egg whites from shell eggs and serving them only on request, says Kurt Kwiatkowski, MSU corporate chef. And they are cooking shell eggs rather than buying hard-boiled eggs at nearly triple the price they were a year ago.

In addition, MSU is testing a baked egg dish called strata to stand in for scrambled eggs on some days — although scrambled eggs will still be cooked to order on request. Also on sale are breakfast sandwiches without egg, such as a sausage and cheese biscuit.

Sterling Spoon Culinary Management, an Atlanta-based food management company with 20 corporate dining locations in Georgia, has a creative breakfast application that uses less egg — a personal breakfast soufflé made with puff pastry and ingredients like sausage, bacon and fresh vegetables.

“We’re having a lot of fun serving them to our guests,” says John Metz Jr., chief executive and executive chef of Sterling Spoon.

A threefold increase in the price of eggs led Eggslut, a fast-casual egg-sandwich eatery in Los Angeles, to renegotiate deals with suppliers to reduce food costs.

“We had to make some sacrifices, not with the egg, but with everything around it,” says Alvin Cailan, Eggslut’s chef and co-owner.

“Because we do so much volume, we were able to get a better price on bread from our baker,” says Cailan. “We order two tons of bacon a month, so we were able to bargain our prices for that, too.”

Egg prices are not a major concern at Publican Quality Meats, a butcher shop, artisan bakery and café in Chicago that launched weekday breakfast during the summer. The high profit margins of the housemade meats and breads in its breakfast items nourish the bottom line.

Such dishes “allow us to show off what we do — chef-quality food, artisanal breads and meats,” says Walker.