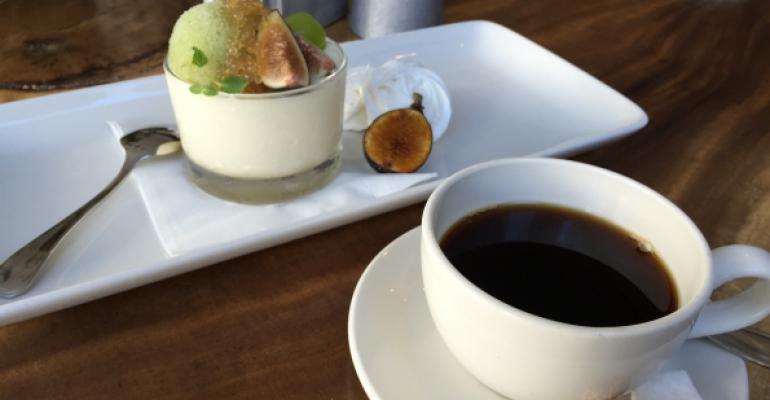 Coffee is the most consumed beverage in America after tap water, according to Datassential, a Chicago-based research company. The Breakfast Journal is a Supplement to Nation&rsquo;s Restaurant News and Food Management. Get all of the articles from the November 2015 Breakfast Journal here.

Coffee sales have doubled at Chick-fil-A since the Atlanta-based chain made the transition last August to a specialty-grade, farmer-direct coffee in all of its 1,900-plus stores and licensed locations.

“It was a customer-driven decision,” says Matt Abercrombie, senior consultant of menu development for the chicken sandwich brand. “We heard from customers that they wanted a better cup of coffee from us.”

To achieve that goal, Chick-fil-A partnered with Thrive Farmers International in Roswell, Ga. In addition to supplying better-tasting coffee, the producers agree to use environmentally friendly, sustainable farming practices and share revenues with independent coffee producers around the world. The decision has resulted in higher quality coffee and more satisfied Chick-fil-A customers, Abercrombie says.

Coffee is the most consumed beverage in America after tap water, according to Datassential, a Chicago-based research company. Interest in coffee has evolved over the years with the advent of Starbucks, coffee houses and specialty-grade coffee.

As a result, today’s more sophisticated consumers not only want a high quality drink, but also coffee grown in an environmentally friendly and sustainable manner, say restaurant and foodservice operators.

Fortunately, for them, the two go hand in hand.

“Why not go directly to the source and get some of the finest coffee beans?” says Adam Jed, who co-owns Bluestem Brasserie with his wife, Stacy. The San Francisco upscale eatery serves lunch and dinner daily and brunch on the weekends.

Just as they do when tasting wines, the couple and their chefs conduct taste tests of various coffee bean brews, looking for the right flavor to compliment menu dishes, from chicken and bacon waffles to lamb meatballs.

The beans are supplied by Stumptown Coffee Roasters in Portland, Ore. Stumptown also visits coffee growers in such places as Colombia, India and Ethiopia, buying directly from individuals.

“Stumptown is a great partner, and they do the heavy lifting for us,” Stacy Jed says. “It’s similar to wines and picking grapes at the peak of the season. They go to a specific region, and identify a flavor characteristic that is influenced by its terroir. We are able to pick a single bean, a single origin of coffee and change it every couple of months.”

During the summer Bluestem offered an Indonesian coffee grown by a women’s co-op. The bean’s nutty flavor compliments both sweet and savory dishes. The couple and culinary staff began another round of tasting to prepare for seasonal changes to Bluestem’s menu that will incorporate squash, apples and pears. “We do often taste the coffee in the kitchen, since the smell from the food has a strong influence on the entire experience,” Stacy Jed says, adding coffee consumption is up at the restaurant.

Other operators also are seeing coffee sales improve with the coffee quality and sourcing. Contract foodservice provider Sodexo upgraded the coffee at all of its Jazzman Bakery Café locations this summer in response to consumer input, says Laura Thompson, senior brand manager for Sodexo’s Culinary Solutions.

“Consumers’ tastes have matured,” she says. “We needed to adjust our roast. They were looking for enhanced roasts, for light, medium and dark roasts.”

The coffee also had to meet sustainability standards. All coffee for Jazzman is certified by the Rainforest Alliance, Thompson says. Jazzman operates across Sodexo divisions, including colleges, hospitals, government and corporate services.

According to Rainforest Alliance, the New York nonprofit annually audits coffee farms or groups of smallholder farms against rigorous standards regarding environmental, social and economic criteria. Not only is the coffee grown in ways to protect biodiversity, farmers are paid sufficiently to improve their standard of living.

In addition to changing the coffee, they also created marketing materials for customers that explain how the coffee changed and why, Thompson says. “We received a lot of great comments,” she says. “We had increased transactions across the board. Consumers also traded up in cup size for their coffee.”

Informing customers as well as employees about a coffee’s origin and the people who grow the coffee also has an impact on sales, said Patrick McElroy, an executive chef with Bon Appétit, which manages the dining services at the University of Washington in St. Louis.

“Coffee is not local; it’s important to tell the story,” McElroy says. “If we stop at the back dock, the story is lost. What’s the use of all that effort?”

The culinary division works with a local purveyor, Kaldi’s Coffee, to source beans directly from farmers in Africa and South America. The owner of Kaldi’s, Tyler Zimmer, is a University of Washington graduate. Kaldi’s brings coffee growers to the campus for talks with students and to meet foodservice employees as part of the division’s Relationship Coffee Program.

To help inform guests, Chick-fil-A launched a website specific to its coffee program when it began the switch — www.coffeewithastory.chick-fil-a.com. “It helped customers understand that not only are they getting a higher quality cup of coffee, they are able to help a farmer in Central America make a living growing coffee in a sustainable way,” Abercrombie says. “The farmer can invest in schooling for kids, better health care for their families. It has a great impact.”

For some operators, finding coffee grown in an environmentally friendly manner has always been a factor in coffee selection. Founding Farmers, a full-service restaurant concept in Washington, D.C., partners with family farms and makes local sourcing a priority. The brand switched from a Chicago-area roaster to a local roaster to supply coffee at its newest location in Tysons, Va., says beverage director Jon Arroyo.

“I was in the market to start looking for something local, but just because it’s local does not mean it tastes great,” Arroyo says. “It’s like the golden goose egg when you can find that local product that tastes good and has a story.”