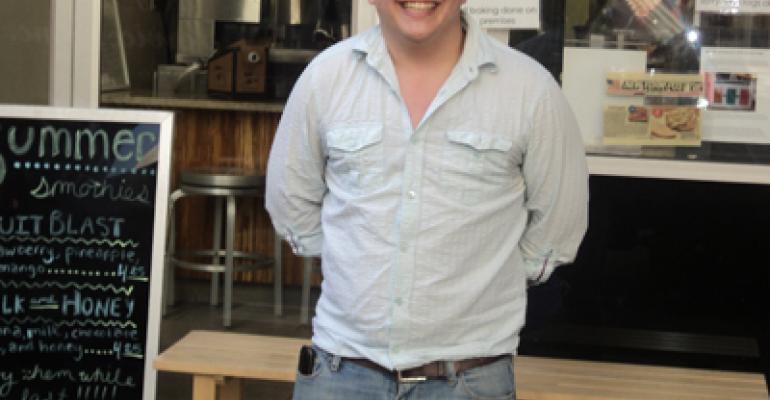 Six months after opening a bagel restaurant, Vic Glazer was told he was allergic to gluten.

Daunted but not defeated, the 27-year-old, formerly a Harvard pre-med student, found a gluten-free bagel mix and added it to the offerings at Vic’s Bagel Bar in New York City.

“It’s hand-rolled, steamed and baked, like our other bagels,” Glazer said. The gluten-free bread is baked first each morning to make sure that wheat does not contaminate it. The oven is thoroughly cleaned every night.

“We can beat out competitors for catering accounts because we have them,” Glazer said of the gluten-free offerings.

Vic’s charges $2.50 for a gluten-free bagel, a significant mark-up from the pricy $1.10 a regular bagel costs, but Glazer said his customers are used to it.

They also appreciate the restaurant’s customization. Glazer describes his restaurant as, “the Cold Stone Creamery of bagel shops.”

Unlike some competitors, who use pre-made cream cheese mixes, Vic’s hand-mixes special spreads to order, though in bowls rather than marble slabs, to prevent cross-contamination of allergens.

More than 40 different toppings are available, priced between 50 cents and 85 cents, except for chopped lox and grilled chicken, which are $2.50 each.

Vic’s also makes signature mixed sandwiches, such as the Tokyo Tel Aviv Express, which has chopped lox, wasabi, scallions and edamame, and sells for $7.50.

The $5.25 Vermonter has bacon, maple syrup and cinnamon, and the $6.95 Club Med is made with roasted red peppers, olives, a Middle Eastern spice mix called za’atar, and basil.

Apart from bagels with or without gluten, flat bagels called flagels, and mini-bagels, Vic’s also offers “bagel balls,” the bagel equivalent of doughnut holes. They sell for 35 cents each.

“Some kids get them in the afternoon and others get them as add ons,” Glazer said. “At catered events, new clients remember us for them.”

Catering has become an important part of the business, since the restaurant is really only busy on mornings and weekends, Glazer observed. He has also added wholesale service, “because if it rains, it doesn’t matter. They get the same amount of bagels.”

Vic’s has also had some success with a weekend beer pong promotion. Called “Don’t Tell the Baker,” guests pay $10 per person for an hour of play. Pitchers of beer are $8 and pizza flagels are made to order.