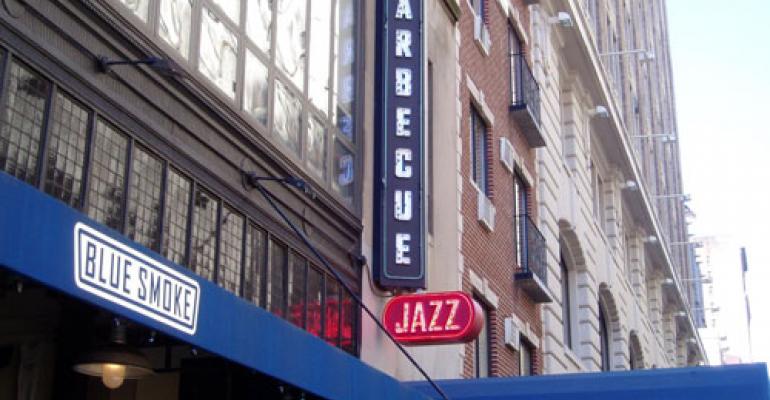 Union Square Hospitality Group, a New York-based multiconcept operator, said it will open three restaurants next year in the city's Battery Park City area, including a Shake Shack, a Blue Smoke and a yet-to-be-named fine-dining restaurant.

All of the restaurants, which will debut in fall 2011, will anchor a new Conrad Hotels and Resorts property at 102 North End Ave. in Battery Park City. The Shake Shack will be located on Murray Street, near a pedestrian walkway, while the Blue Smoke will be situated on Vesey Street, and the fine-dining restaurant will be on the northwest corner of North End Avenue and Murray Street.

“My colleagues and I are thrilled to have the momentum and opportunity to invest in a location with as much history, momentum and opportunity as Battery Park City,” said Danny Meyer, founder and chief executive of USHG. “We are honored to contribute to the ongoing renaissance of this neighborhood and hope each of these restaurants will become enduring, beloved gathering places for the entire community.”

The Battery Park City location will be Shake Shack’s eighth unit when it opens. The burger chain is USHG’s fast-casual homage to the old roadside restaurants of the 1950s and ’60s, offering freshly made burgers, hotdogs, fries, shakes and frozen custard.

Six Shake Shacks are in operation now, including three in Manhattan, one at the New York Mets' stadium in Queens, one in Saratoga Springs, N.Y., and one in Miami. Another is set to open next month on Manhattan’s Upper East Side, and USHG said it plans to open its first international location in Kuwait City in fall 2011.

The Blue Smoke restaurant is the company’s second unit in New York City. It already operates one in Manhattan’s Flatiron District, one at the New York Mets' Citi Field, and one in Greenwich, Conn.

A spokeswoman for USHG said no details for the fine-dining restaurant were available at press time.

The company, which owns and operates such fine-dining restaurants as Union Square Café, Eleven Madison Park, Tabla, Gramercy Tavern, Maialino and the Modern, has said it would continue to focus on growing the Shake Shack and Blue Smoke brands.