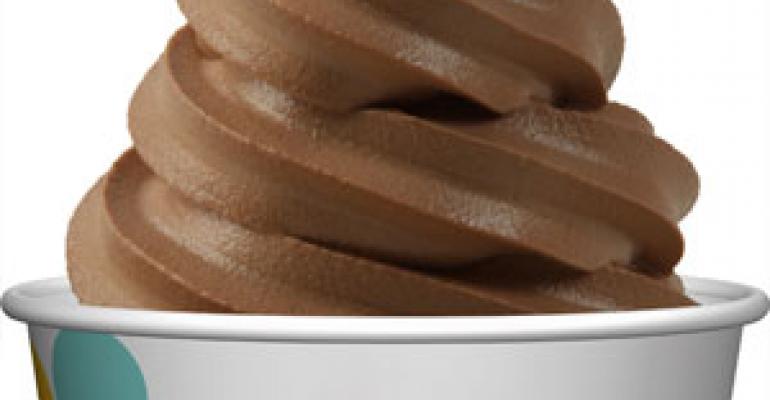 Looking to compete more with its health-focused rivals, TCBY has rolled out a reformulated version of its yogurt dubbed Super Fro-Yo with a more nutrient-rich profile.

The new yogurt, which is lower in fat and includes fiber, marks TCBY’s latest effort to change its image. Last year, the chain debuted a new prototype with a self-service format and a more stylish design, along with an improved version of its yogurt.

Wayne Geilman, a food scientist who leads Salt Lake City-based TCBY’s research and development, said the most recent yogurt upgrade to Super Fro-Yo was a response to “the nutritional needs of consumers.”

The nearly 30-year-old TCBY brand was known in earlier years for its more ice-cream-like flavor, which avoided the “acidic” taste of yogurt that Americans didn’t appear to like, he said.

With the rise of tart frozen yogurt brands, such as Pinkberry, Red Mango and Yogurtland, yogurt is increasingly associated with healthful benefits, such as probiotics, nutrients and calcium.

With Super Fro-Yo, TCBY can better compete by offering an even more healthful alternative, Geilman said.

The company has brought down the fat content of its yogurt to below 2 percent, so it can be labeled “low fat,” he said. However, the product has also maintained its rich, creamy texture with the addition of fiber, something American consumers are told to eat more of.

The fiber in TCBY’s product also serves as a “pre-biotic,” or food for the healthful bacteria in the yogurt, which boosts the benefit that live-and-active cultures bring to the digestive system, he said.

Super Fro-Yo is also higher in protein, vitamins A and D, and calcium, and the product now includes seven types of probiotics, Geilman said.

To qualify as Super Fro-Yo, for example, the yogurt must have fewer than 120 calories per serving, a minimum of 10 percent of the daily recommendation for vitamin A and 20 percent of the recommended level of vitamin D, 1 gram or less of saturated fat, and a minimum of 20 billion live-and-active cultures at the point of manufacture.

In addition, each serving provides 3 grams of fiber, 4 grams of protein, and about 20 percent of the recommended levels of calcium, the company said.

TCBY said the Super Fro-Yo is now available at the chain’s 440 domestic locations and is designated with a logo.

No sugar-added versions are also available, and stores will continue to carry the regular versions of TCBY yogurt in some flavors that can’t meet Super Fro-Yo standards, such as the higher-calorie peanut butter.

He noted that TCBY is still offering an “indulgent” treat, even if it is more healthful.