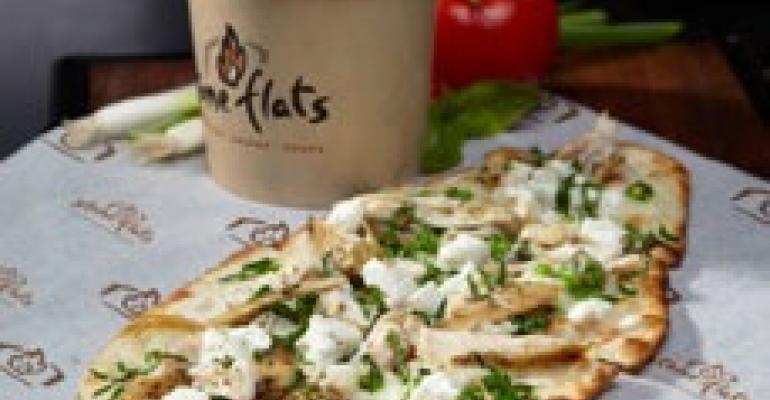 The 2,800-square-foot restaurant opened Nov. 19 and follows the Chipotle model of focusing on fresh and healthful ingredients, such as hormone-free and humanely raised meat. The signature line of flatbreads also contains less than 500 calories, although guests can create their own with more indulgent toppings, if they choose.

Brad Mason, the founder of Stone Flats, said the goal is to attract adult females who would bypass a pizza place for a lighter option. “They make 75 percent of the restaurant decisions,” he said.

At Stone Flats, the flatbreads are crisp and cracker-like. Guests can choose either from a line of signature flatbreads and toppings, or create their own as they walk down the service line.

Guests also can choose from a selection of fresh produce, such as arugula or scallions. The cheeses available include low-fat and whole milk mozzarella, and goat cheese.

One dessert called a “cinna-flat” is described as “cinnamon toast meets apple pie” and is served with ice cream. The menu also includes soups and salads, beer and wine.

“Simplicity is the best way to control processes and quality,” Mason said.

Once assembled, the flatbreads are cooked in 90 seconds in a gas-fired tunnel pita oven. Guests pay and take their food from the counter.

The average check runs about $8 to $9 per person, Mason said. A flatbread with one protein, cheese and vegetable sells for about $5.50, and a salad would cost $3.50, for example.

The restaurant is aiming for sales of $500 per square foot or about $1.4 million annually.

Describing the 110-seat restaurant’s design as “urban loft,” Mason said much of the furniture and building materials used in Stone Flats are made from recycled materials.

Mason envisions the concept as the first in a national chain, although he has no plans to franchise.

“There’s a convergence of three essential factors right now that will help fuel our success: people want healthier choices, they want it fast, and they want a good value,” he said.

“I’m also a firm believer that people will support a company that recognizes and addresses the things that are important to them, such as their desire for healthy, tasty food alternatives, environmental responsibility, community support and employees who present a delightful dining experience to our guests.”